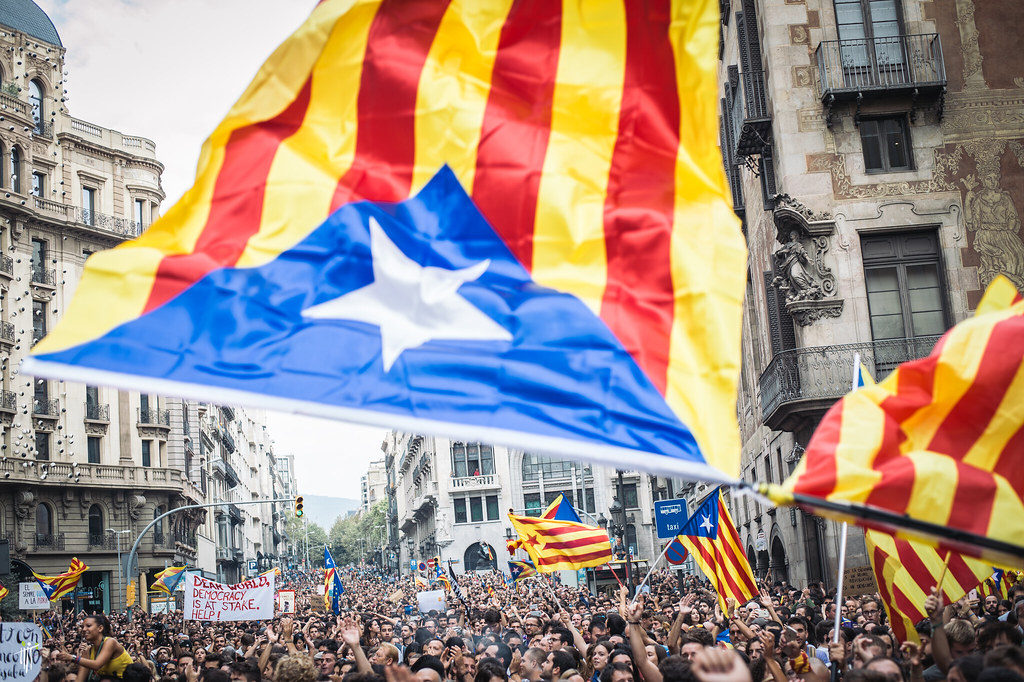 The Spanish government’s intention to partially pardon political prisoners of the Catalan independence movement has provoked an angry reaction from the right wing, which is trying to stir up its social base to wear down Socialist Party (PSOE) president Pedro Sánchez. However, key sectors of the ruling class support the amnesty, behind the scenes, confident that their interests are better defended by making this small concession to the Catalan independence movement. What should be the position of the left?

To begin with, we want to make it clear that we unconditionally defend the right of self-determination of the Catalan people, a right that is supported by 75.1 percent of the Catalan population, according to the latest survey by the Centre d'Estudis d'Opinió de la Generalitat (CEO). It must be the Catalan people who decide if they want to form their own state or remain within the Spanish State.

The forced union only succeeds in increasing national suspicion and hatred, which goes against the brotherhood and unity of the Catalan and Spanish working classes. Only the reactionary Spanish state apparatus, with its heads of the army, police, civil guard, judiciary, monarch at the helm, and the big capitalists who support it, are interested in imposing the unity of the Spanish State for the enormous privileges and economic interests it provides them.

The Spanish State and its constitution are implacably opposed to the exercise of the right to self determination, which contravenes the will of the majority of the Catalan people. We thus regard as legitimate any action that tries to exercise this right by direct mass action, such as the referendum on 1 October 2017.

We acknowledge the referendum and its result, and therefore we consider the 12 leaders of the movement as political prisoners. We thus demand their unconditional release and the annulment of their sentences. In the same way, we demand to lift all charges brought against the over 3,000 Catalan republican activists, prosecuted for different charges, and that the exiled Catalan political representatives be free to return without threats or coercion.

Regarding the issue at hand, and the release of prisoners from the point of view of legal formality, we have always defended their amnesty. But to the extent that the central government grants them a pardon, without the obligation of repentance or apology on their part, we also support it.

Our position has nothing to do with the cynical calculations of bourgeois politics that seek to channel the return of the majority independence parties, ERC and Junts, to the path of constitutional autonomy in exchange for these pardons. We defend the unconditional release of prisoners, by any means, based on elementary considerations of democracy and justice.

The reaction strikes back

Of course, the forces of reaction have wasted no time and have put all of their machinery in motion to mobilise their base in the reactionary petty bourgeoisie, that mass of professionals, the self employed, retirees, rentiers, merchants and small exploiting bosses: a hysterical and ignorant mass. The reactionary state apparatus is not lagging behind, with opposition mobilised through the police, the civil guard, the army and especially the judicial caste.

🎥 | Ahead of possible pardons for the jailed independence leaders, right-wing parties in Spain are preparing political and legal battles against the potential move, including a protest on June 13

Unfortunately, a layer of workers, contaminated by Spanish chauvinism, also want to reject the pardons. This sentiment was cultivated in part by the policy of "national unity" with the right, shamefully practiced by the PSOE, and embodied in the ambiguous attitude of the leaders of Unidas Podemos. The latter were cowed by the dominant pressure of Spanish public opinion after the application of Article 155 of the Constitution, which dissolved Catalan autonomy temporarily at the end of 2017, which for a few months installed a climate of semi-reaction in society.

The first measure of the reaction was to call a rally in Madrid on 13 June, with the support of the right-wing parties PP, Vox and Ciudadanos, to show their rejection of the pardons. This was followed by a report from the Supreme Court, that reactionary crowd of privileged individuals who evade all popular oversight. Brimming with a vengeful attitude, they declared the pardons "an unacceptable solution."

The Supreme Court's rejection of the pardons legally obliges the government to grant a partial pardon, not a total one, consisting of lowering the penalty, but not annulling it, and will possibly include disqualification from holding public office. Despite that, the political prisoners will most likely be out in a matter of weeks, or a very few months.

Why key sectors of the ruling class favour the pardons

One of the most important points to highlight is that key sectors of the ruling class, linked to the Ibex35 (the Madrid stock market), are in favour of the measure. In reality, the granting of pardons is the only sensible measure from the point of view of the Spanish capitalist regime, as an attempt to appease the Catalan situation and facilitate the integration of the leaders of ERC and Junts back into a patch of sanctioned autonomism in Catalonia.

The Catalan ERC and Junts need to offer something to their social base and voters to justify the freezing of the so-called unilateral struggle for independence, and return to the situation from before the independence movement. Although in their speeches and proclamations, they assure supporters that the postponement of unilateral measures towards independence is simply a temporary truce, while they wait for a more propitious moment to resume.

The editorial published on 30 May in El País, the main mouthpiece for banks and a section of Spanish big business, is interesting in this regard as it sets its own position on the pardons. After rigorously attacking the Catalan independence movement, it goes directly to the heart of the matter:

"The sentences contributed to overcoming the most acute phase of the crisis, but they have not definitively resolved the existential challenge for Spanish democracy that the independence movement represents" (our emphasis).

“Yes, there is enough evidence that the opposition to everything of previous governments has favoured the growth of independence in the last decade. The situation is already difficult. But it would become an unmanageable catastrophe if a qualitative leap turned the positions in favour of secession into the vast majority" (our emphasis).

The big bourgeoisie understands the same thing as the Marxists. The Catalan question is an "existential challenge" for the Spanish bourgeois regime, because the independence of Catalonia would be a devastating blow to the apparatus of the Spanish State: its prestige, its unbeaten mysticism, its perks and privileges, and the centralist ideology that facilitates its authority over the petty bourgeoisie. It would also deal a severe blow to the prestige of the army and monarch should they prove unable to prevent the rupture of the state by the revolutionary movement of the Catalan masses.

Furthermore, it would attack the heart of the ruling class, because independence for Catalonia, in addition to suppressing its direct control over a territory that contains 20 percent of the State's wealth, markets and vast industrial resources, would significantly weaken the state's authority over Spanish society. It would dampen the fear of the working masses towards the apparatus of repression.

This serious sector of the bourgeoisie understands better than its mediocre representatives in the state apparatus, and the right-wing parties, that the indefinite cornering of the independence movement, in a context of crisis within the regime and social discontent, is what has given it vitality in these past years. The prospect of a rebound in this movement, turning the pro-independence position into one shared by “the vast majority", is not ruled out in the future. This would indeed “become an unmanageable catastrophe"; that is, a full-fledged revolutionary movement in Catalonia, necessitating military intervention, with unforeseeable consequences.

And, of course, if in its irrepressible madness the right was to get the Constitutional Court, close to the PP, to declare the pardons illegal, the prospect of an "unmanageable catastrophe" would be quite immediate. Hence the forcefulness of this more far-sighted sector of the bourgeoisie, shown by El País, in making it clear to the state apparatus that it should not play with fire.

This position of caution, and showing the carrot to the independence movement, at a time when the Generalitat of ERC-Junts is rushing towards "autonomy", is also shared by the most far-sighted representatives of the European bourgeoisie. Thus, the Legal Affairs Committee of the Council of Europe has also requested the release of the Catalan political prisoners.

Fight against the Spanish reaction on the streets 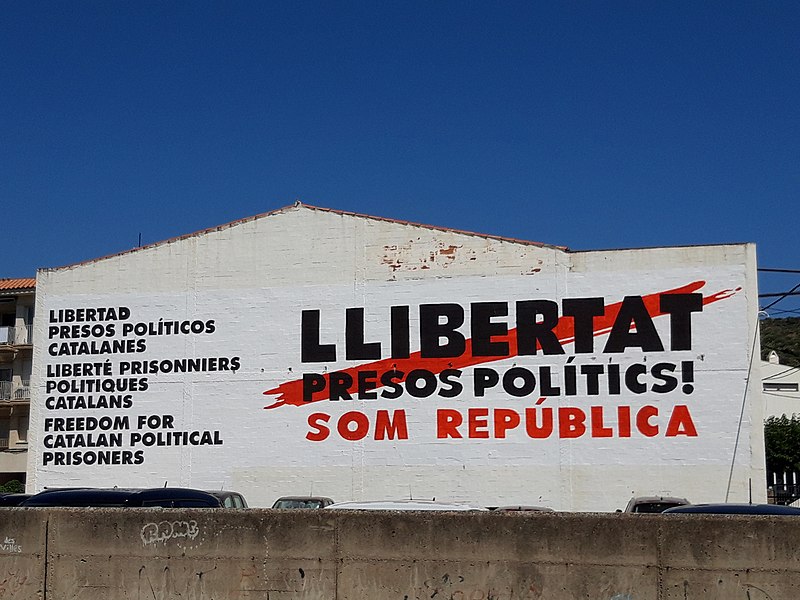 Amnesty for political prisoners! For class struggle and self determination for Catalonia! / Image: Jove

In reality, the tantrum of the right and the far right has the sole objective of preserving the prestige of the state's repressive apparatus (its police and judges) and trying to weaken the government as much as they can to bring it down. They have been joined by "former leaders" of the PSOE from the "felipista" era during the Transition, like Felipe González himself, who has completely degenerated politically and personally.

These characters act as direct agents of reaction and the state apparatus. They do not conceal their personal hatred for Pedro Sánchez and would like to see him fall, to be replaced even by the right wing, without any remorse. These individuals have been completely transformed and can only be classified as class enemies (Felipe González, Guerra, Corcuera, Leguina, Redondo Terreros, etc.).

In spite of everything, we are not in the autumn of 2017. The broad sector of the working class that was confused, disoriented and temporarily fell prey to the siren songs of reactionary Spanish nationalism has already settled accounts with this past period. It understands the danger that the right represents and how they manipulate national sentiments for their dirty purposes. Many workers, in fact, will breathe a sigh of relief, believing that the pardons could ease the situation in Catalonia and return to a situation of greater stability.

In this context, the left should struggle against the mobs of the right and challenge their presence on the streets. In Catalonia, and in the rest of the state, without ceasing to demand amnesty, it’s necessary to organise mobilisations demanding the immediate and unconditional release of the prisoners, the annulment of their sentences, and the withdrawal of the Euro-orders of the Supreme Court and the Audiencia Nacional against exiles.

It would be a mistake to remain passive, because the government's decision to grant these pardons appears to be within reach, even with its limitations. These mobilisations should also have the aim of gaining recognition in the eyes of public opinion, and on the streets, to fight head-on against Spanish nationalism, with its Francoist and oppressive character, not only in Catalonia but throughout the state. We must demand the purge of the state apparatus of all Francoists and reactionaries, and to firmly raise the banner of Catalan self-determination, once again.