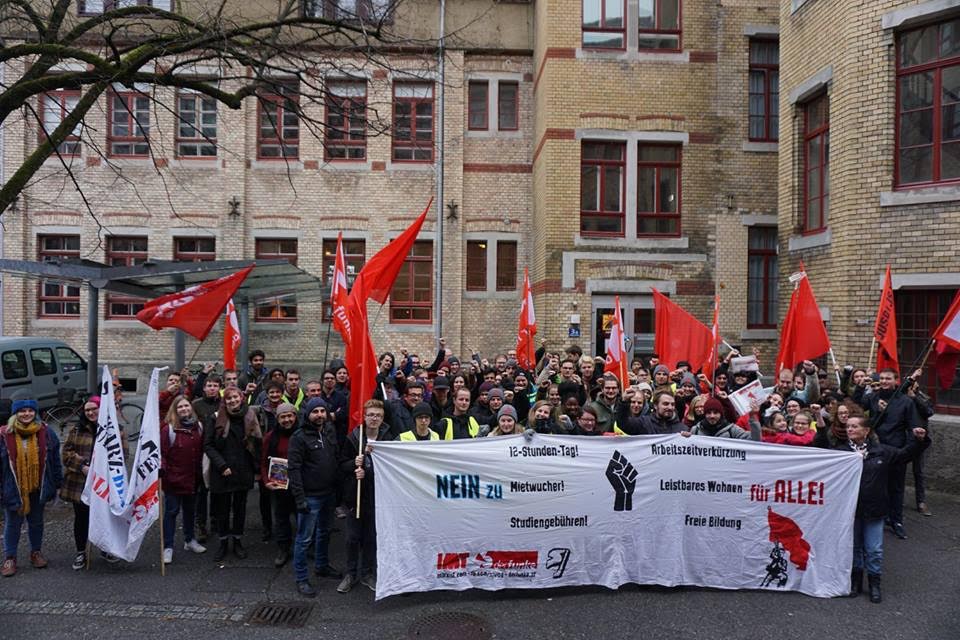 Last weekend, the small Austrian town of Bregenz played host to a large gathering of young socialists at the annual Karl-Marx-Seminar. The event was organised by Sozialistische Jugend Vorarlberg and Der Funke, the Austrian section of the IMT.

The current situation in Austria is a focal point for European class struggle. The new government, elected in December 2017, is a “Schwarz-Blau” (black-blue) coalition between the Austrian People’s Party (ÖVP), the traditional conservative party, and the Freedom Party of Austria (FPÖ), a far-right, anti-immigration party. This new regime is wasting no time in attacking the conditions of the working class in Austria, and giving all possible advantages to the capitalists. Workers' rights are being dismantled, with working weeks being lengthened to 60 hours and regulations regarding breaks and weekends to be abolished. Trade unions are being touted as ‘unnecessary’. In particular the changes are affecting women, who are being forced out of the labour market and pushed back into the traditional family, robbing them of economic independence and providing a source of unpaid labour to replace previously state-funded care programs. The reactionary FPÖ are astonishingly repulsive: they reject same-sex couples, talk of “defending our cultural territory” against “Islamification”, and their stance on the Nazis is unclear at best.

This new coalition is relentlessly pushing the program of the Austrian capitalists, in a desperate attempt to give the country an economic edge in preparation for the next financial crisis. All the racist rhetoric, attacks on rights, and cuts to welfare are designed to split and weaken the working class, thereby increasing the rate of exploitation. The people however, and especially the youth, have been fighting back hard. In January 70,000 people took to the streets of Vienna to demonstrate against the government, and this mass movement is only just beginning. 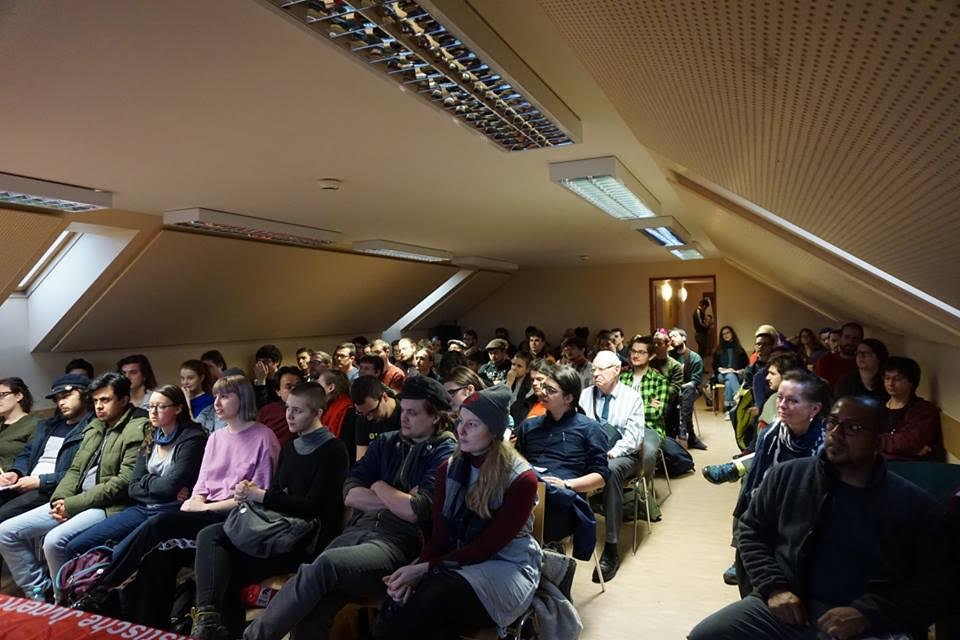 Packed room at the Karl Marx seminar / Image: own work

These were the circumstances in which over 100 members of Sozialistische Jugend Voralberg and Der Funke met in Bregenz for a weekend-long seminar on Marxism. The event was packed, with a strong emphasis on education and political discussion. 11 different workshops were held, as well as a plenum for the discussion of perspectives in Austria.

Precisely in response to the oppressive nature of the new government towards women, one workshop opened the question of sexism for discussion. The fact that the Schwarz-Blau coalition is combining attacks on female and on workers’ rights in an attempt to boost the economy is a reflection of what Friedrich Engels analysed long ago in the Origin of the Family, Private Property the State: that the oppression of women is deeply rooted within the foundations of class society, and so within capitalism. Capitalism relies on all-pervading sexism to provide it with a vast pool of unpaid labour, to keep the working class subjugated, and to ensure wealth remains in the hands of the bourgeoisie through male inheritance.

We observe this fact in all countries in the form of the gender pay-gap and in the enormous pressure on women to have and to look after children. This Austrian government, in particular, clearly displays its need to divide the working class; indeed its economic program for maximal profiteering couldn’t hold for a week were the working class united in its fightback. Thus, the social progress achieved on the women’s front over countless years of struggle is cut back immediately under the organic crisis of capitalism. The solution is not to be found in reformist tactics alone, but in the socialist revolution of society: “No women’s emancipation without socialism! No socialism without women’s emancipation!”

Of course, socialist revolution entails world revolution, and the workshops also concentrated on corresponding international events that are agitating capitalism. Two comrades from the Mexican section led separate workshops on events in Central America and of Cuba, to analyse the paths and mistakes of the left there. We must consider why socialist workers’ republics do not dominate this area of the world, despite decades of revolutionary traditions against American imperialism, particularly in the form of the United Fruit Company that dominated economic relations throughout the last two centuries. 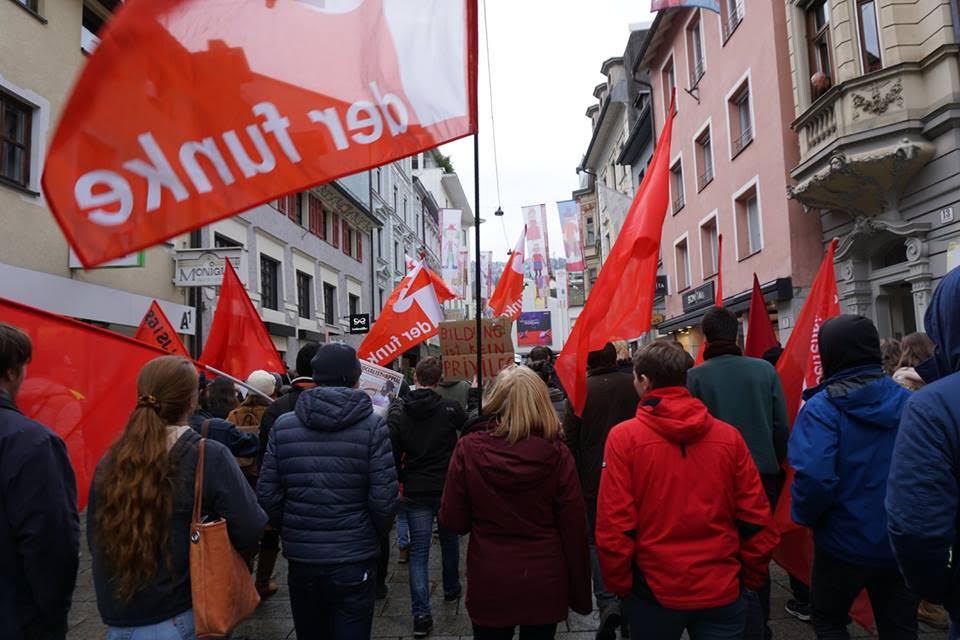 One main point of analysis is that which Trotsky makes in the Transitional Program, namely that “the crisis of humanity is the crisis of the revolutionary leadership”: indeed revolutionary movements in Honduras, Nicaragua, Guatemala, Mexico and El Salvador have all seen their share of bloodshed as reformist leaders failed to seize the power for the masses. We must avoid these mistakes as new movements sweep across these countries, but also in the rising struggle in Austria and in all other countries of the world. As an example of such a movement, current events in Honduras were also discussed, where the masses have taken to the streets against a clearly fixed re-election of President Juan Orlando Hernández, and sections of the riot police have refused to follow orders and oppose the people.

Despite the busy schedule, the entire group still found time to take to the streets of sleepy Bregenz to denounce the new government with a loud demonstration. This was the first such event Bregenz or the wider region of Voralberg had seen, and so it received ample media attention. The slogans were clear as to the cause of the new political situation: the crisis of capitalism. Chanting “Brecht die Macht der Banken und Konzerne” (“Break the power of the banks and companies!”) and “Klassenkampf!” (“Class struggle!”) and many more, the group publicly displayed their Marxist perspective and demands. Students and workers marched under their red flags singing the hopeful German lyrics of the Internationale: “People, hear the signals for the final fight: the Internationale creates the human right!”.