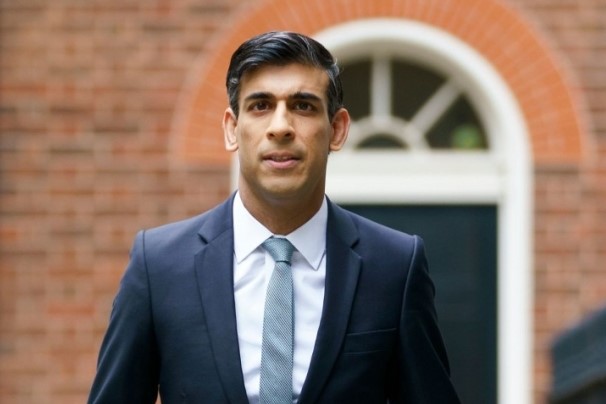 To the relief of the ruling class, Rishi Sunak has been anointed Britain’s latest prime minister. The new Tory leader has promised ‘stability’, on the basis of a programme of harsh austerity. Instead, revolutionary explosions lie ahead.

10 Downing Street is changing occupants faster than a room on AirBnb, with its third resident in less than three months – and the fifth in just over six years – moving in today.

Rishi Sunak has officially become the country’s latest prime minister, after the yet-to-be-coronated King Charles invited the newly-coronated leader of the Tory Party to form His Majesty’s Government.

Sunak replaces the hapless Liz Truss, who enters the history books as Britain’s shortest-lived premier, having lost her contest to outlast an iceberg lettuce.

She will now ignominiously retire to the backbenches, no doubt enjoying a side-hustle on the establishment speech circuit, offering wooden talks on ‘how I crashed the UK economy in just 44 days’.

Government of the rich

The ruling class and the bosses will be breathing a sigh of relief. After being lumbered for years with unreliable, egotistical buffoons such as Boris Johnson and Liz Truss, they have finally got their man in Number 10. 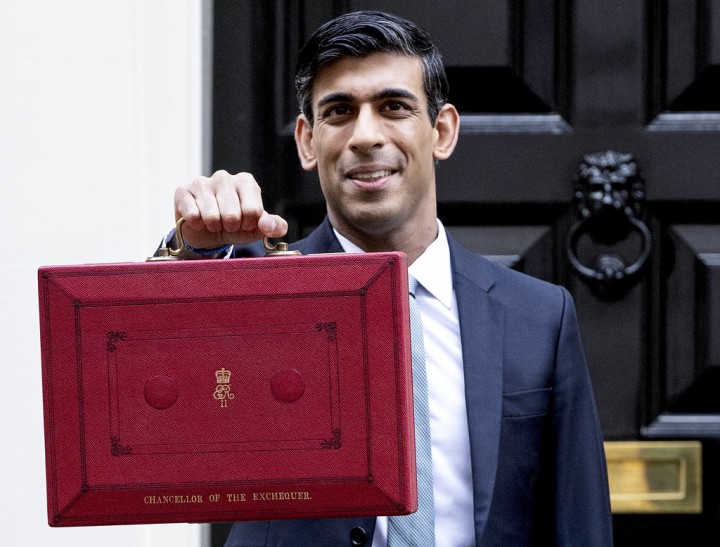 Truss or Sunak, it will be a government of the rich, for the rich, by the rich / Image: Harriet Pavey

“The UK has had enough entertainment for a generation,” remarks Robert Shrimsley in the Financial Times, speaking on behalf of the exasperated British capitalist class, “and now desperately needs a period of undramatic stable government.”

Even over the weekend, the serious strategists of capital were alarmed at the prospect of a Boris bounceback, with Johnson asserting that he had surpassed the 100-MP threshold required to make it onto the ballot.

But somehow, behind closed doors, conversations between the men in grey suits arranged for a smooth succession from Truss to Sunak, preventing the ‘swivel-eyed loons’ in the Tory membership from having a say over their latest party leader.

As a result, the Tories have now exchanged a zealous Thatcherite who provided tax cuts for the rich with a multi-millionaire infamous for providing tax cuts for himself and his family. Either way, it will be a government of the rich, for the rich, by the rich.

“Plus ça change, plus c'est la même chose,” as the French proverb goes: the more things change, the more they stay the same.

Who knows what swayed Johnson’s mind in the end, convincing him to stand down.

Maybe Boris, like Penny Mordant, had in fact failed to gain enough support amongst Conservative MPs? Maybe he was persuaded to stand aside by the resignation threats from his parliamentary colleagues? Maybe he did not fancy the prospect of presiding over a fractious party and a crisis-ridden economy?

Either way, the die has been cast. And the challenge now falls to Rishi Sunak to achieve the impossible: to unite and rescue a deeply-riven Tory Party, all whilst carrying through the most unpopular economic programme in decades, in an effort to restore Britain’s financial credibility.

In this respect, just as we wrote upon Truss’ leadership victory, the new PM inherits a poisoned chalice. Indeed, thanks to his predecessor’s chaotic actions, the mess is now several orders of magnitude greater than when she entered into office mere weeks ago. 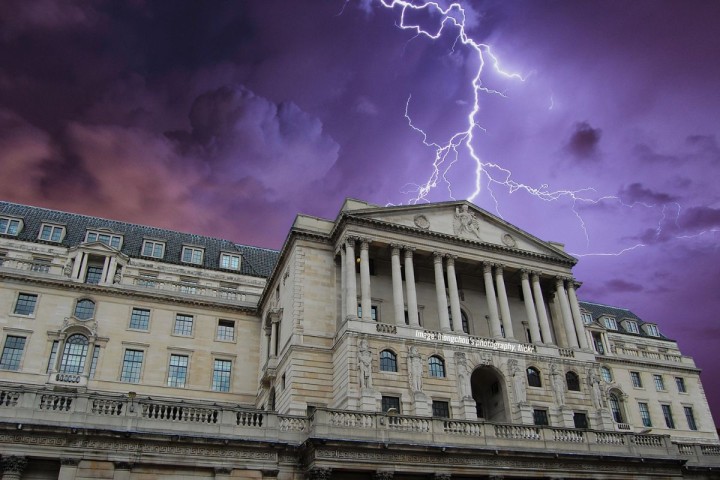 Following the previous PM's chaotic actions, there is an estimated £40 billion hole in the public finances / Image: Socialist Appeal

Having provoked panic on the markets, causing the pound to plummet and government borrowing costs to soar, there is an estimated £40 billion hole in the public finances.

How exactly this will be filled is set to be announced next Monday, on 31 October. But it is already clear that this Halloween budget statement will contain a lot of tricks, and no treats, for the working class.

Rishi Sunak and Jeremy Hunt – who will likely stay on as chancellor – have indicated that it will be through “eye-watering” austerity and attacks that the books will be balanced.

Government departments will be asked to find further ‘efficiency savings’. Public services, already cut to the bone, will be starved of further resources. And spending will be axed across the board, including investment on so-called ‘levelling-up’ projects.

Hunt has already confirmed that the government’s energy support package will be stripped back. Welfare claimants are likely to be next in the firing line, with suggestions that benefits will only rise in line with wages, not with living costs. And even sacred cows like the pension ‘triple-lock’ might not be safe, given the depth of cuts that are required.

The ramifications will be serious and deadly. The NHS is already on the brink of collapse, with a millions-long waiting list. Courts are backed up for months with cases. Dilapidated schools are struggling to retain staff. And workers across the public sector are dropping out in droves, after years of real-term pay cuts – made even worse by rampant inflation and rising bills.

All of this will mean excruciating pain and misery for millions across the UK. Not only workers, but even middle-class layers are being squeezed, as interest rates increase, driving up mortgage repayments for homeowners, and pushing indebted small businesses into bankruptcy. 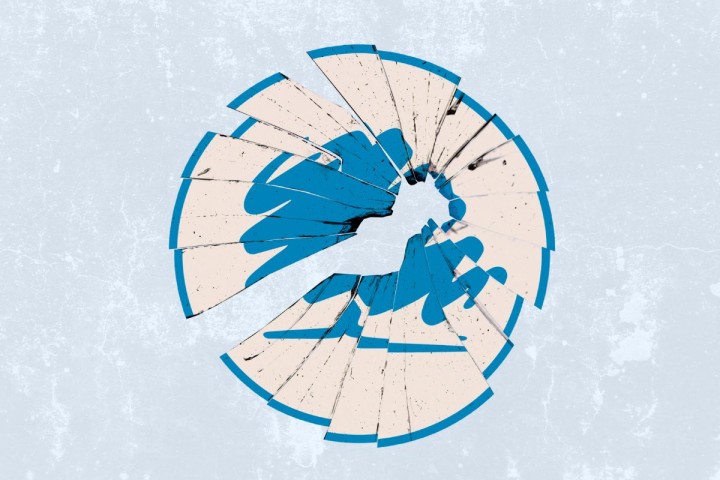 Faced with electoral annihilation, many Tory MPs will likely rebel against the austerity measures proposed by Sunak and Hunt / Image: Socialist Appeal

These are once-reliable bases of support for the Tory Party, which is now languishing behind in the polls as a result of Truss’ kamikaze decisions. Some polls put the gap between Labour and the Tories at as much as 39 percentage points.

Faced with electoral annihilation, and looking to save their own skins, many Tory MPs will likely rebel against the austerity measures proposed by Sunak and Hunt. After all, those in ‘Red Wall’ seats won in 2019 on the basis of promising constituents a ‘levelling up’, not years of further decline and devastation.

A large fraction of the Tory Party – both in Parliament and amongst the membership – is already opposed to Sunak, who they believe to be a ‘backstabber’ and a ‘socialist’. For these frenzied, frothing fanatics, it is a case of ‘Boris or bust’. And pledges of further fiscal discipline and retrenchment will only intensify the mutinous moods and divisions within the party.

The ruling class will therefore not get the stability they desire from Sunak’s premiership. Instead, British capitalism is on course to enter even-more perilous waters. And having their desired helmsman at the tiller will make little difference. 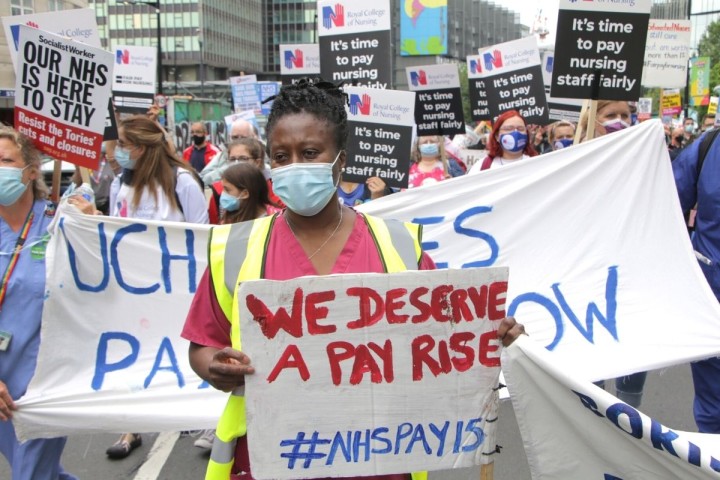 Attempts to restore the economic equilibrium will serve as the spark for further political and social explosions – not only within the Tory Party, but above all from the labour movement.

Sunak’s austerity agenda comes on top of 12 years of attacks on jobs, pay, and conditions; at a time when the trade unions are already mobilising, and the working class is awakening and flexing its muscles.

Recent months have seen a rising tide of industrial militancy – most notably with the rail and mail strikes by the RMT and CWU, respectively.

Public sector unions are balloting for action, with higher education staff in the UCU voting overwhelmingly in support of strikes over pay and pensions, and nurses, teachers, and civil servants likely to follow suit.

And coordinated action has begun, with joint protests and picket lines seen on 1 October, and the recent TUC Congress endorsing calls for further united strikes and struggle.

The stage is therefore set for a winter of discontent; a sharp confrontation between this latest Tory government and the working class; in short, for an all-out class war.

In this context, a section of the ruling class is weighing up the option of a general election, hoping that a right-wing Starmer government could come in and do the dirty work required to fix Britain’s finances – at workers’ expense. 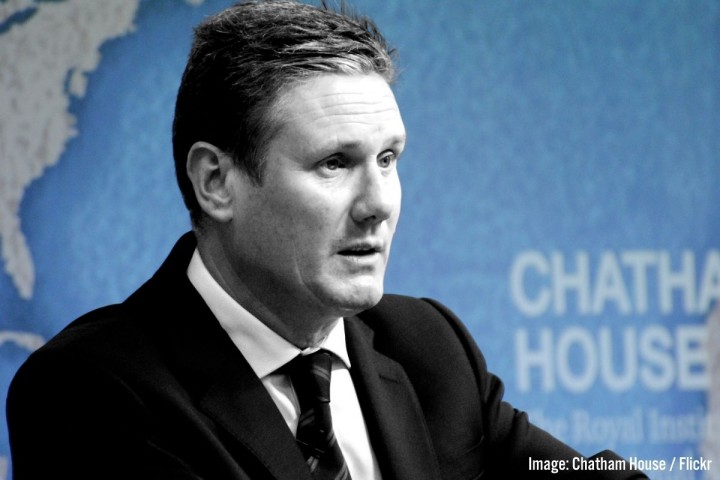 ‘Sir’ Keir Starmer, a loyal servant of the establishment, has made it clear that he would be willing to carry out the diktats of big business Image: Chatham House, Flickr

‘Sir’ Keir Starmer, a loyal servant of the establishment, has made it clear that he would be willing to play such a role, promising ‘responsible’ economics – that is, obediently carrying out the diktats of big business.

Such a Labour government, however, even with a landslide majority, would be a government of crisis from day one. Carrying out the orders of the capitalists, it would have nothing to offer workers and youth but Tory-lite policies of austerity.

This, in turn, would lead to upheaval across the labour movement – and to a further shake-up and radicalisation of consciousness within the working class, preparing the conditions for revolutionary eruptions across society.

In the final analysis, the problem is not about who resides in Downing Street, but about the bankrupt system that they defend.

The world economy is heading towards a new world slump. British capitalism is a sinking ship. And even the most experienced, dependable captain would not be able steer it clear of the iceberg that looms on the horizon.

Lest we forget, the ruling class once considered David Cameron to be a reliable representative – before he gambled away their fortunes with the Brexit referendum, all in pursuit of his own narrow political interests.

Similarly, Theresa May was lauded as a ‘safe pair of hands’ – before she too gambled by calling a snap election, losing the Tories’ majority in the process.

And after Boris Johnson led the Conservatives to victory in 2019, mainstream commentators across the board were naively predicting that the Tory Party would rule unimpeded for a generation.

But as we, the Marxists, predicted at the time, contrary to the pessimism pervading the rest of the left, Johnson’s government would soon be revealed to have “dynamite built into its foundations”.

Now this combustible material is igniting, with explosive repercussions.

Britain is therefore heading into a revolutionary epoch. The ideas of class struggle and socialism are back on the agenda. 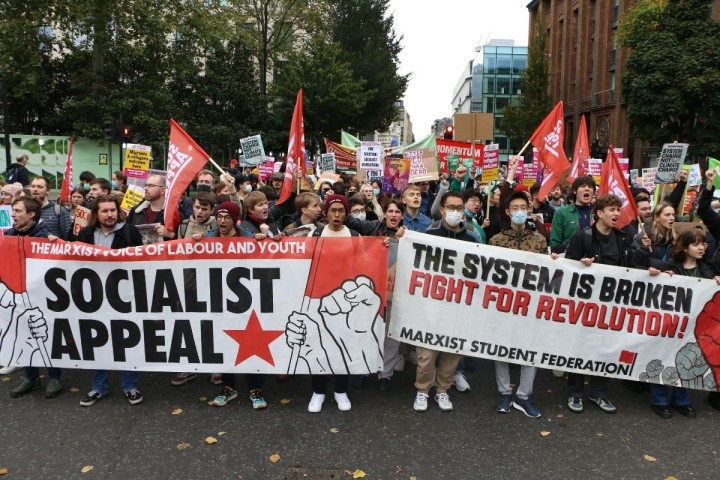 The ideas of class struggle and socialism are back on the agenda in Britain / Image: Socialist Appeal

What is needed is a mass campaign of action to kick out all the Tories – and the rotten capitalist system that they defend.

As RMT leader Mick Lynch has asserted: “We need an uprising!”

All the conditions for revolution are maturing. The ruling class is split. The middle classes are in ferment. The working class is on the move, looking for a path out of capitalism’s impasse.

What is missing is the fourth – and most decisive – factor: that of a revolutionary leadership, which can point the way forward for workers and youth.

The task of building such a leadership falls on us. We have no time to waste.