Details
Our correspondent in Russia
25 March 2022 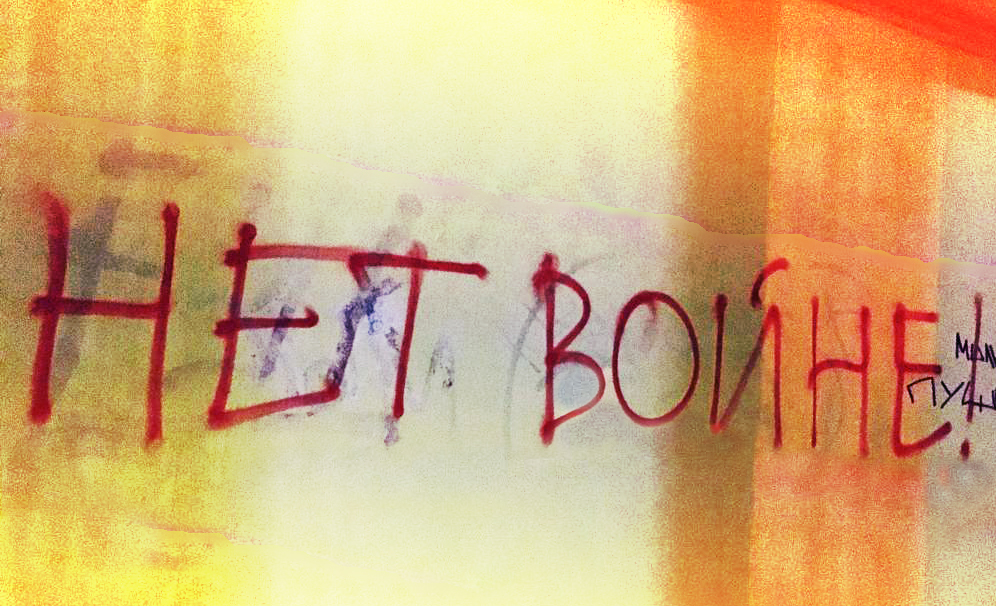 We have received this report on the rising repression within Russia, as the “special operation” (i.e. the war in Ukraine) drags on. Even the mildest criticism of the invasion is being shut down, on pain of arrest and imprisonment. Independent news sources and social media platforms are shuttered, and anyone voicing disapproval of the war is labelled a “national traitor.” These measures are a sign of President Vladimir Putin’s weakness, not his strength, and will only cause the masses’ resentment to accumulate.

In the month since the start of the war in Ukraine, more than 15,000 protesters have been detained in Russia. ‘War’? You had better forget that word if you’re in Russia lest you face a fine or arrest for publicly mentioning it. If you dare to violate the relevant law more than once – for instance, by going out with a poster calling for peace – you will face criminal charges. Even if your poster is a completely blank piece of paper, you will face certain detention.

Even random passersby who travel to city centres on the day of protests to spend their rapidly depreciating rubles runs the risk of being detained. Not so long ago, all anti-COVID-19 restrictions miraculously ceased to operate, with the exception of one: the ban on mass political events. Many are even being told to take off their protective masks – suddenly “national traitors” are hiding behind them!

In one of his speeches over the course of the “special operation”, Putin spoke about the danger from these “national traitors”, who are “mentally ... not with Russia”. And indeed, large numbers of people – oppositionists, but also members of the intelligentsia who feel they face danger by remaining or who no longer wish to be associated with the ongoing shame – are hurriedly abandoning their settled life in Russia. Wealthier individuals among them are leaving for Europe, whilst most others are leaving for Georgia and Armenia. Journalists, IT specialists, small entrepreneurs, etc. – about 50,000 people have left Russia for these two countries alone.

In small Armenia, with a total population of just 3 million, emigrants from Russia already make up 1 percent of the population! But even leaving the country now can be difficult. Quite a few reports are emerging from the border of special services subjecting those leaving to persistent questioning. They are looking through their personal correspondences and on instant messages, and where they find anything indicative of opposition, they are being prevented from leaving.

Restrictive measures are being introduced targeting those with dual citizenship or residence permits in “unfriendly countries”. They are banned from freely buying or selling real estate, for instance. And those with Ukrainian passports who find themselves in Russia for work or study are also being subjected to police persecution. It is commonplace for the doors of opponents of the war to be daubed with insulting inscriptions (“a traitor lives here”, etc.). In some cases, there have been beatings, intimidation and ill-treatment of detainees by the police.

There is probably not a single area in Russia free of the policy of intimidation, or where students, public sector employees, scientists etc. are not facing demands that they express support for the “special operation” in one form or another. While the leadership of the Russian Orthodox Church fully supports the war, where some Orthodox priests have timidly condemned the ongoing bloodshed in their sermons, they too have been condemned as enemies of the state.

The biggest blow, however, has fallen on the independent media. Well-known radio stations (Echo of Moscow) and internet channels (Rain) have been closed. News portals (Medusa) are blocked, others have been forced to shut down of their own accord (Znac.com) or impose strict self-censorship (Novaya Gazeta) and even delete their materials. The official reason being given is the so-called “fake news law”, according to which it is forbidden to state versions of current events that differ from the official data of the Ministry of Defence of the Russian Federation. At the time of this writing, seven criminal cases have already been initiated, mainly due to messages on social media.

But even within the pro-government media there are signs of discontent. An employee of Channel One became famous when she appeared live on air with an anti-war sign. Naturally, she was also labelled a “traitor” by her now-former boss (according to him, she contacted the British Embassy on the eve of her action and received money from them).

National traitors, however, are not only appearing on the opposition media, but also apparently on foreign social networks. The answer to large-scale international sanctions by the Russian government has been the sanctioning of its own people. Blocking Instagram and Facebook, with tens of millions of users, has deprived Russians not only of the opportunity to share photos and valuable thoughts, but also of sources of income for many of the self-employed producers and small businesses (especially in the southern regions, where unemployment is high). Such actions are sure to cause indignation among previously apolitical layers. On the Russian social media network, Vkontakte, a number of communities have been blocked, including those on the left, for condemning the ongoing Russian military aggression.

It was common for labour activists to agitate at factory entrances, but that has now become dangerous. Even simply distributing leaflets with a call to join a trade union can result in detention and beatings at the police department.

Putin’s mounting repression of the opposition is not a sign of strength, but of weakness. Websites have appeared, which are dedicated to listing “national traitors”, among whom left-wing figures are also listed. The government openly urges the population to report those expressing disapproval of the “special operation” to the police. This is a disgusting phenomenon for the Russian people, who recall the practices of denunciation and arrests in the Stalinist period.

But despite the repressions and frenzied propaganda of the media, there is no patriotic hysteria like the one that swept Russia during the First World War, or even the kind of euphoria we saw after the annexation of Crimea in 2014. According to polls, 70 percent of young people in Russia do not approve of the “special operation” – this is a very large number.

In order to create the illusion of support, the authorities are using crude, bureaucratic methods that only repel people. Sooner or later, the information bubble – in which valiant Russian troops are liberating Ukraine from the Nazis, in emulation of the feat of their great-grandfathers – will dissipate. Then the masses will have to look with sober eyes at a new reality: poverty, a lack of rights, lies, isolation, and contempt from the whole world. And these problems will demand a solution.

The Putin regime, which is directly responsible for this, is able to fill prisons with “national traitors”. But is it capable of solving the burning economic and political issues on which the very existence of Russia depends? There are serious doubts about this, to say the least.