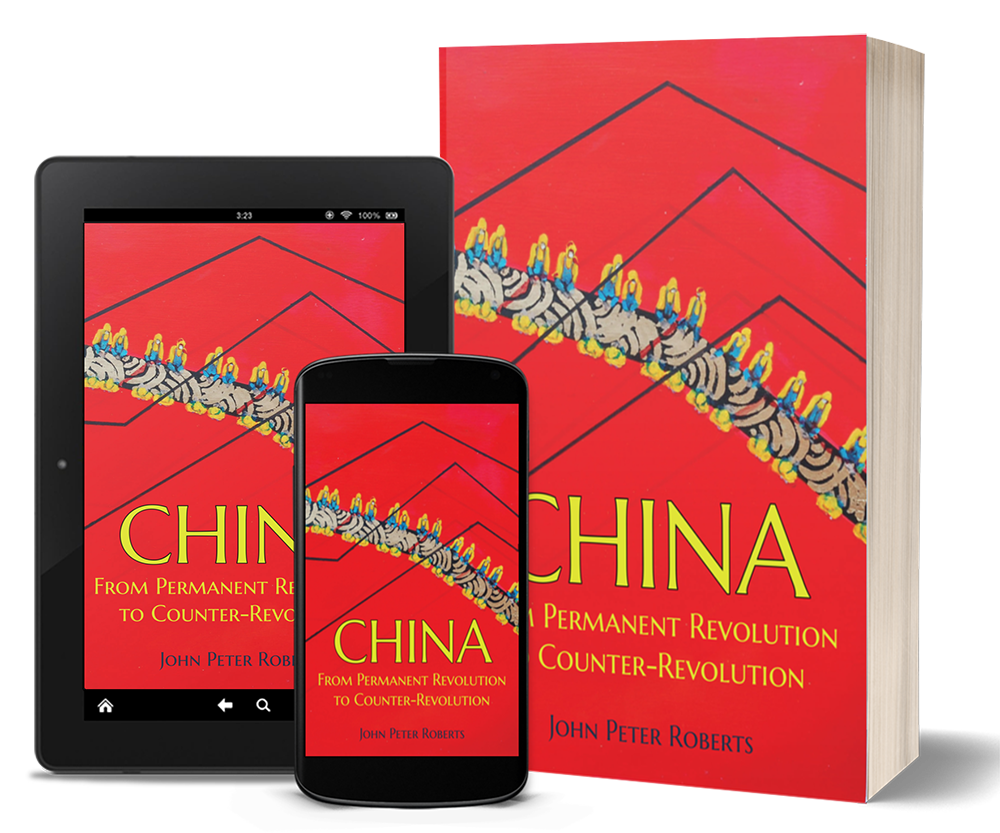 In 1949 the coming to power in China of the Communist Party under the leadership of Mao Zedong prepared the ground for the liberation of over half a billion workers and peasants from the yolk of landlordism and imperialism. By the mid-1950s not only had the basic task of the bourgeois democratic revolution been carried out – i.e. the abolition of landlordism, the end to colonial rule, genuine national unification and the establishment of the basic conditions for the development of capitalism – but capitalism itself had been snuffed out.

This development reconfirmed the basic idea developed by Leon Trotsky of the Permanent Revolution that the capitalist class in underdeveloped countries, having arrived late on the scene of history, was incapable of carrying out its own, bourgeois, revolution. It remained tied to the feudal landlords on the one hand and subservient to its imperialist masters on the other.

In the Russian Revolution the Menshevik position was that all countries had to pass through a democratic bourgeois stage before they could move towards socialism. This idea stated that a period of capitalist development was first required to build up industry and with it a modern working class. Only after such a period would it be possible to contemplate struggling for socialism. That explains why the Mensheviks sided with the Russian bourgeoisie and ended up in the camp of the counter-revolution.

The weakness in this idea was that it was based on a narrow national view of each country, which ignored the context of the global situation where the rise of powerful imperialist capitalist countries dominated the world market. This changed the conditions in which the fledgling nation al bourgeois classes could develop in the underdeveloped countries into modern capitalist ruling classes.

If Lenin and Trotsky had adhered to this view, they would not have insisted on all power passing to the soviets, i.e. to workers’ power, but would have sought an accommodation with a “progressive wing” of the Russian bourgeoisie and would have limited the workers’ organisations to being an opposition within a bourgeois-democratic set up.

The reason why Lenin and Trotsky did not go down this road is that they understood full well that in the conditions of Russia in 1917 this would not have been possible. Permanent Revolution, i.e. the revolution beginning as bourgeois-democratic but passing immediately to the socialist tasks under the leadership of the working class is what happened in Russia.

In spite of these essential lessons of the October Revolution, the Communist International under the leadership of Stalin reverted to the Menshevik outlook of “stages”; the first being the bourgeois revolution which would open up the possibility of capitalist development and only years later would this prepare the ground for the second stage, the socialist revolution.

It was this idea that explains the role played by the official Communist Parties in Spain during the Civil War, and in Italy and France at the end of the Second World War. The Communist Parties raised the illusion that a “progressive” bourgeoisie existed, whose task it was to develop society. The defeat of the Spanish workers in the 1930s and of the Italian and French workers at the end of the War is the price the working class paid for this erroneous idea.

By the time the Chinese Communist Party (CCP) took power in 1949 its leadership was steeped in this idea that after taking power the “bourgeois-democratic” stage would begin. That explains why Mao initially did not move towards the abolition of capitalism. He sought sections of the Chinese bourgeoisie with whom the workers and peasants could form an alliance.

This well-researched book by John Roberts provides source material which confirms that this was the perspective that Mao sought to act on post-1949. The problem Mao faced was that the Chinese bourgeoisie was not willing to oblige him in his perspective. The bulk of the Chinese bourgeoisie backed Chiang Kai-shek and fled with him as the Red Army advanced. Those that did remain tried to sabotage any attempt of the CCP to carry out genuine reform.

The key element in understanding how the CCP ended up abolishing capitalism in China is to be found in the fact that it had state power, i.e. the “armed bodies of men” were not the police and soldiers of a bourgeois state, but the “People’s Liberation Army”, mainly a peasant army under the control of the Communist Party. This meant the old semi-feudal/bourgeois state had been smashed by the advancing forces of Mao.

This state attempted to reach a compromise with the bourgeois elements, but this failed to materialise, not due to any conscious move on the part of the Communist Party leaders towards “socialism” but because the interests of the peasants and workers were irreconcilable with those of the corrupt Chinese national bourgeoisie. Step by step Mao found himself having to take over the whole economy and by the mid-1950s China had become what we would term as a “deformed workers’ state”. By this is meant a state where the economic base of a workers’ state has been established, i.e. the expropriation of the landlords and the capitalists, state ownership of the means of production and centralised planning, but it is “deformed” because the workers do not hold state power directly, do not have control over the system as a whole.

Initially the planned economy proved to be enormously beneficial to the working masses of China. John Roberts highlights throughout this book the immense progress, for example, in the field of women’s liberation, a key indicator in any revolution of the progress of working people in general. He also underlines the movements forward and the movements backwards in the winning of women’s rights, in line with the general ebbs and flows of the revolution itself.

The abolition of capitalism in China under Mao was achieved in spite of his initial perspectives and not because of them. Mao found that in order to carry out even the most basic of reforms he had to move against the capitalists. But what came into being was a system that was governed and controlled by the bureaucratic caste at the helm of the state. In essence it was the same system that existed under Stalin in the Soviet Union, a tremendously progressive state-owned planned economy, but which was doomed to crisis at some point in its development under the control of the bureaucracy.

The reasons for this can be found in Leon Trotsky’s The Revolution Betrayed, an analysis of the Soviet Union in the 1930s, in which he raised the perspective of an inevitable crisis of that system, which would either lead to a movement of the working class to gain political power or, failing that, to a collapse of the system and a return to capitalism. With great foresight, Trotsky predicted that the forces of the bourgeois counter-revolution would come from within the “Communist Party” itself.

Trotsky’s predictions took several decades before they were proved correct. After the Second World War the Soviet Union was immensely strengthened. Its economy had expanded many times over and it had taken control of Eastern Europe. To its east the Chinese Revolution successfully put in place a system similar to its own. This was followed by the Cuban revolution and then the victory of Vietnam over US imperialism. Not only was the Soviet Union strengthened materially, but its authority within the working class internationally was also enhanced. The workers of the world felt that the Soviet Union was exporting revolution everywhere.

However, all of this only served to hide the real process taking place. The Soviet economy, from the spectacular growth of the 1930s, was beginning to slow down and gradually grind to a halt, and eventually in the 1970s it was close to zero. It was this that determined the eventual collapse and the chaotic return to capitalism post-1991.

In China, the move to abolish capitalism in the 1950s was not a conscious process, but was determined by objective factors. Once that process was in place, however, the rising Chinese bureaucracy became conscious of where they were going. In doing so, they also attempted to remove from the history books their previous positions in an attempt to show that all along Mao knew that his aim was socialist revolution, as John Roberts shows by comparing quotes in later versions of official party texts with previous versions.

The return to capitalism in the recent period also did not start off as a conscious choice but came on the back of the worldwide crisis of Stalinism and the difficulties China was facing internally. Initially, the policy adopted by Deng was similar to the New Economic Policy the Bolsheviks were forced to adopt in the early 1920s. In an isolated backward economy, with international socialist revolution having been defeated in the immediate period after World War One, Lenin understood that some concessions to market methods were necessary, albeit within the context of overall state control of the commanding heights of the economy and with strict control over foreign trade.

However, it is one thing for a relatively healthy workers’ state to adopt such policies, it is a completely different scenario when a privileged bureaucratic elite, standing above the working class, adopts the same policy. Trotsky explained that within the privileged bureaucracy eventually the desire would grow, not only to enjoy the fruits of their position within society, but also to be able to pass these onto their offspring, and that would only be possible by ceasing to be merely privileged administrators and becoming owners of the means of production. That is what we see taking place in China today.

This book provides much information on what really happened in the build up to 1949 and the period that followed. It shows how a Stalinist party, whose proclaimed aim was to achieve the “first stage”, bourgeois-democratic revolution, was forced in spite of itself to move very quickly to the “second stage” and abolish capitalism. This was a brilliant confirmation in practice of Trotsky’s theory of the Permanent Revolution, albeit in a deformed manner. The more recent return to capitalism, i.e. counter-revolution, also confirms Trotsky’s perspectives as developed in his classic The Revolution Betrayed. Thus the title, “China: from Permanent Revolution to Counter-Revolution”, encapsulates the essence of 90 years of Chinese history and reveals what really happened.

Today China is a very different country to what it was in 1949. Powerful means of production have been developed and with it has come into being the biggest working class ever seen in history. But a capitalist China will inevitably be affected by the contradictions of capitalist production. Then the Chinese workers will seek an alternative and will begin by looking at their own past history. They will need to unbury the truth, which is covered in a mountain of official mythology, to do so. This book is part of that process of unburying.