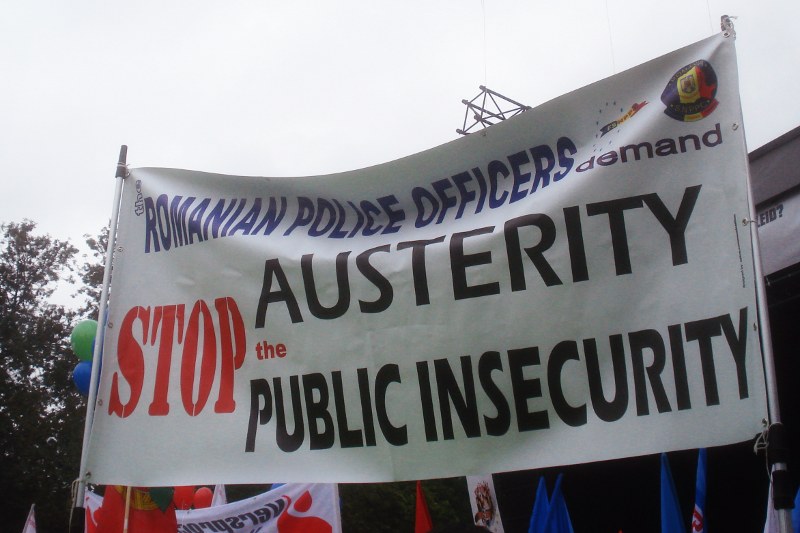 Last week several days running the government in Romania faced stiff opposition on the streets to its package of austerity measures. So much so that the interior minister was forced to resign, while the prime minister was also called on to resign. So tense was the situation that the police held emergency talks with the president.

The street protests come after the adoption in June of severe cuts in public spending combined with tax rises. These include public sector wage cuts of 25 per cent, the cutting of thousands of state jobs and a 5% increase in VAT. Healthcare is also suffering as the government cuts funding and staffing. All these measures have been adopted under pressure from the International Monetary Fund and other international lenders who posed severe conditions in exchange for loans to the Romanian government.

In one protest an estimated 10,000 workers from several different sectors demonstrated in front of the main government building in Bucharest. The demonstrators were demanding the cuts in wages be taken back and that the minimum wage should be increased. The protest was organised by the Federation of Trades Unions (BNS).

Earlier in September several hundred self-employed taxi drivers came out in protest in the capital Bucharest against a government decision that they should pay health contributions retrospectively for the last five years. In the southeast county of Vrancea around a 1,000 workers protested against the government’s decision to cut municipal budgets in 2010 while in eastern Romania in the town of Braila over 100 nurses and other employees organised a protest outside a hospital.

Meanwhile Cartel Alfa, one of the largest Romanian trade unions as well as the Union of Police Officers announced they were organising more protests against wage cuts. It was in fact an unauthorised police officers’ demonstration against President Traian Basescu that led to the resignation of the Interior Minister.

In January 2007 Romania became a member of the EU. This was the final confirmation that western capitalists considered the country a fully-fledged market economy. Since the fall of the Ceauşescu regime in 1989 the country had adopted a series of measures, with large-scale privatisation and cuts in state subsidies, geared to transforming Romania into a capitalist country. Within five years the legal structures were in place and the country began a process of integration into world capitalism, and until 2008 foreign investment in the country had been increasing. That is when the trouble really started. The 2008 global financial crisis seriously affected the economy, pushing it into recession in 2009.

All the calculations that the government had made were based on the previously high levels of growth. Until then there had been optimistic talk of Romania doubling its GDP in the period 2006 to 2011. With a contracting economy the public deficit started to balloon, reaching over 7% of GDP in 2009.

It was in this situation that the government was forced to turn to the IMF, the European Commission and the World Bank in early 2009. It managed to broker a $27 billion financial assistance package, but this did not come without conditions attached. In exchange for the loan the government had to impose austerity measures. These included, as we have already seen a 25% cut in public sector wages and a 15% cut in pensions. This is what led to the protests in May of this year which saw up to 40,000 people marching through the streets of Bucharest (in a country of just over 22 million population). But protests alone are not going to stop such measures and in June of this year the Romanian parliament, by a small margin, pushed through the austerity package.

Although the recession has pushed back down what was a growing level of inflation, this year it still stands at 4.4%, one of the highest rates of inflation in the EU. So one can imagine the anger of workers as they see jobs slashed and wages and pensions savagely cut back, and deteriorating education and healthcare systems. Unemployment has also gone up, reaching close to 8% this year and is expected to continue to grow.

So long as the economy was booming, and with the added relief of emigration to other parts of the EU during the boom of the past decade, illusions in capitalism among some layers no doubt had increased. This also explained a reactionary political situation in the country. “Communism” seemed a thing of the past. This is not difficult to understand especially when one recalls the monstrous regime that governed the country under Ceauşescu.

And yet now that people in Romania have had a real taste of capitalism, not just in boom times, but in times of recession, opinions are changing. According to an opinion poll carried out by the “Institute Investigating the Crimes of Communism and the Memory of the Romanian Exile” – not exactly a Communist-friendly institution almost half of Romanians today, 49%, believe life was actually better under Ceauşescu! A higher standard of living and job security were given as the main arguments to sustain this opinion. Barely a quarter of the population believes conditions have improved since 1989 [source balkaninsight.com].

The truth of the matter is that Ceauşescu also cut back heavily on public spending to pay off his foreign debt. After borrowing heavily in the 1970s, in the early 1980s he decreed that Romania would eliminate its foreign debt and by 1989 he had actually paid back $10.5billion dollars. He did this with draconian measures. Imports were slashed and food was rationed while the government exported everything it could to earn cash to pay off the debt. It was this severe programme that led to the violent overthrow and execution of the Ceauşescus at the end of 1989.

The Ceauşescu regime was a one party totalitarian dictatorship that rested on state ownership and a planned economy. It is presented as a “communist” regime, but it had nothing whatsoever to do with genuine communism. It was what Marxists define a “deformed workers’ state” or a “proletarian bonapartist” regime. This is a regime that rests on the economic base of a workers’ state, but which is terribly bureaucratically deformed, with a privileged elite at the top running the country. Genuine Communism is the rule of the workers through democratically elected bodies, with no privileged layer at the top.

In that sense the same poll quoted above reveals another interesting point. When asked what the negative aspects of the old regime were, 69% cited the “lack of freedom”. That means that what the Romanian workers are unconsciously looking to is a system that guarantees jobs, houses, welfare, pensions, a decent education system, good healthcare, etc., and democracy. That can only be achieved through a genuine socialist transformation of society.

More than twenty years since the fall of so-called “Communism”, with two decades’ experience of capitalism, the real alternative still remains a nationalised, planned economy under the democratic control of the workers who produce all the wealth. This idea will come to haunt all those ex-Stalinist bureaucrats who after 1989-91 recycled themselves as bourgeois politicians.