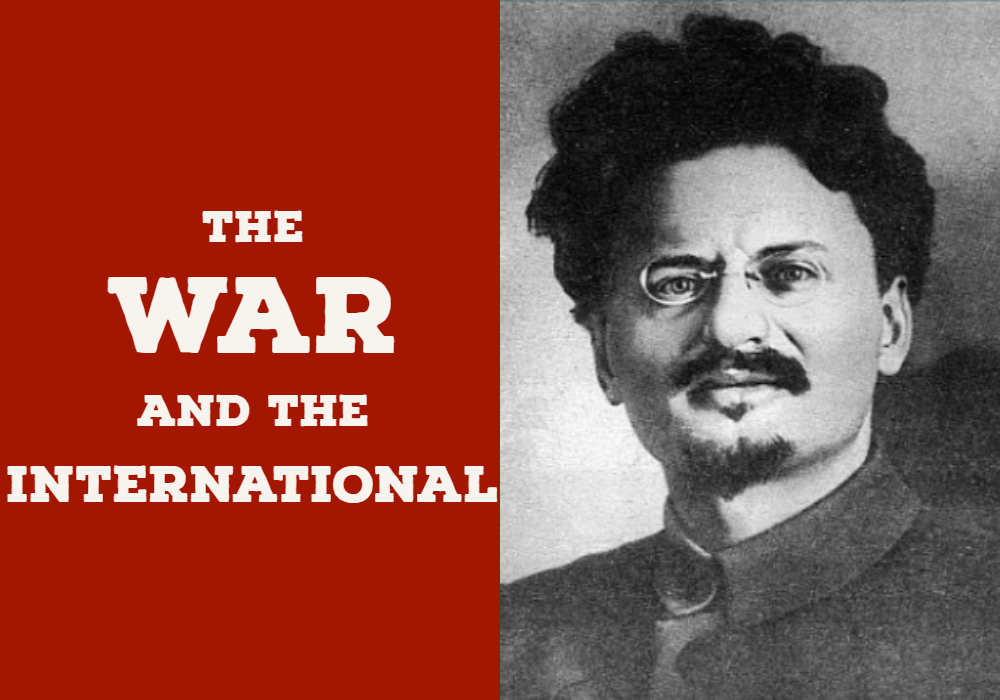 This pamphlet was written in 1914 during Trotsky’s two month stay in Zurich. He had arrived there rather hurriedly from Vienna which he left on the evening of August 3rd, the day Germany declared war against France. It was published serially in Russia in Martov’s Paris paper Golos from November 1914 onwards. Issued in German under the title Der Krieg und die Internationale, it earned him a prison sentence in absentia in Germany.

An English edition was published in America under the title The Bolsheviki and World Peaceby Boni & Liveright, New York, 1918 (With an introduction by Lincoln Steffens.)

In February 1918, the International Socialist Review, published by the Socialist Party of America, reproduced Trotsky’s Preface with the following note:

Comrade Trotsky was preparing an article for the Review when the revolution came up in Russia, compelling him to drop everything and return. Review readers will appreciate our disappointment and later on our joy in reading the inspiring record our comrade has made during the past few months.”

With regard to the booklet, the editors wrote:

“Every revolutionary socialist in America will want to read and re-read his new book entitled The Bolsheviki and World Peace.”

This issue of the Review proved to be the last, for the administration of President Wilson barred the magazine from the post and compelled it to cease publication. [1]

President Wilson had, however, already read the booklet by calling for the proof sheets from the publishers. Some of Trotsky’s phraseology (which would sound fine and liberal) he used in his own peace program: No reparations, self-determination of nations, United States of Europe, etc. Trotsky heard of this from Charles Boni himself, in 1931, when the publisher visited Trotsky in exile at Principo. [2]

Much of Trotsky’s prolific literary output during the war years remains untranslated into English. We gather that these writings fill many of the volumes of his collected works in Russian. [3]

This does not mean that his views were different from those of the Bolsheviks. Zinoviev wrote in reference to this booklet that it posed the question correctly on all fundamental issues. [4]

This on-line edition contains Lincoln Steffens’ introduction to the American Edition, a note by Trotsky on the history of this booklet, The Zimmerwald Manifesto and his Open Letter to Jules Guesde.

In addition this version follows in structure a 1971 uncopyrighted edition published by Wesley Press for the British Young Socialists which in turn follows the Boni & Liveright publication. The Wesley Press edition was entitled only The War and the International since the Young Socialists wanted to to use the orginal name of the document and Trotsky was not a member of the Bolshevik Party in 1915.

Trotsky’s own notes flow throughout the text, are in a slightly smaller print size so as to easily distiquish it from the document as a whole.

Each section of this online version, while containing only those referenced footnotes (all footnotes references are linked to the actual footnote for easy accessibility) from the Wesley Press edition, also contains a glossary (also linked) of names tailored for each of the three parts of this document.