The NUPES (New Ecological and Social Popular Union) list, led by La France Insoumise (FI), is seen by left-wing workers and youth as the best vehicle to strike blows against the right in June’s legislative elections. The French Marxists critically support voting for NUPES candidates. But we must say that this alliance with discredited, right-wing reformist parties risks demobilising FI’s support base, and will undermine their ability to carry out social reforms in government, in the event of an NUPES majority.

The NUPES has the support of millions of young people and workers. They see this electoral alliance as the only way to defeat the right in the parliamentary elections - or at the very least as a good way to strengthen the left opposition in the next National Assembly, and in particular Mélenchon's La France Insoumise (FI).

Moreover, the agreed programme of the NUPES take up several key demands of FI's official programme (on pensions, the minimum wage, price freezes, etc.). In this respect, the alliance thus appears to Mélenchon's voters as a direct extension of the FI's official programme, L'Avenir en commun. Thus, the NUPES would not only open up the prospect of beating the right; it would also, and above all, open up the prospect of a left-wing government which - unlike that of François Hollande (2012-2017) - would engage in a genuine policy of progressive social reforms.

Revolution is obviously in favour of defeating the right and the extreme right on 12 and 19 June. We call on our readers to vote for the NUPES candidates. However, this alliance raises a number of problems that are not secondary questions.

In the run-up to the presidential election, Revolution called for mobilisation in support of the FI candidate. As in 2017, this was critical support. As a Marxist organisation, we have many differences with the ideas and programme of the FI. We gave an overview of these in our statement on FI’s programme.

Our central argument can be summarised as follows: an FI government would immediately face enormous pressure from the French - and international - ruling class to abandon its programme of social reforms. Confronted by these colossal pressures, an FI government would quickly be faced with two options: either capitulate, i.e. renounce the implementation of its programme (as Tsipras did in Greece in 2015); or, go on the offensive, i.e. engage in a policy of breaking with the capitalist system by nationalising all the major levers of the economy, under the democratic control of the workers. 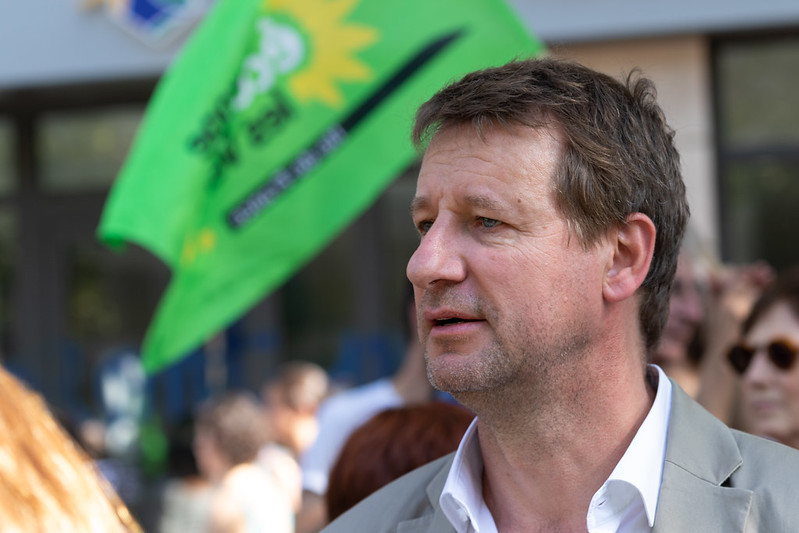 The PS and the Greens represent the right wing of reformism: all their policies are strictly and firmly deployed within the narrow limits of the capitalist system / Image: Etienne Flickr

The major shortcoming of L'Avenir en commun lies precisely in the fact that it does not take this alternative into account. It does not aim at breaking with the capitalist system. Therefore, a government of the FI would be vulnerable to the inevitable and implacable pressures of the ruling class.

The pressures that would apply to an FI government and their deputies in the national assembly would also apply, even more so, to a hypothetical NUPES government, whose parliamentary majority would be composed not only of deputies from the FI, but also of from the PS (Socialist Party) and EELV (Europe Ecology – The Greens). Indeed, if L'Avenir en commun does not envisage breaking with capitalism, the leaders of the PS and the Greens envisage it even less. The PS and the Greens represent the right wing of reformism: all their policies are strictly and firmly deployed within the narrow limits of the capitalist system.

Olivier Faure (leader of the PS), Julien Bayou (leader of EELV) and the rest consider the market economy and capitalist property as invoilable necessities that must be defended. And as the bourgeoisie demands drastic counter-reforms, against the backdrop of the economic crisis and the decline of French capitalism, the leaders of the Greens and the PS do not dare to propose serious progressive reforms. Their real programme - the one they defended during the presidential election - is extremely moderate. If they were in power, they would end up abandoning even the mildest of reforms, under the orders of the bosses’ union, Medef. François Hollande's government was a clear illustration of this.

The fragility of the “agreement”

It is true that in order to form the NUPES, the leaders of the Greens and the SP had to sign “agreements” whose programmatic content is more left-wing than the programmes of their presidential candidates, Jadot and Hidalgo. However, the reason for this “left turn” is obvious: without the NUPES, the SP and the Greens would have suffered a rout in the legislative elections, given their respective results in the presidential elections (1.7 percent and 4.6 percent) compared with FI (22 percent). The NUPES offers the Greens and the SP better prospects, in terms of “winnable” seats, than their campaign in the first round of the presidential elections.

In the negotiations with the Greens and the PS, then, the FI leadership was in a strong position to force them to sign “agreements” containing several key demands from L'Avenir en commun.[1] However, let us assume that the NUPES wins the parliamentary elections. The ruling class will immediately and very firmly oppose the implementation of its programme. It will exert various types of pressure, notably economic pressures, such as blackmail about cutting jobs, capital flight, etc.

From the Elysée, Macron will do everything in his power to oppose the government's social reforms. Finally, the pressure of the ruling class will find reliable support among the Green and PS deputies. With their weight in any potential parliamentary majority, they will be in a position to demand that the FI renounce its programme. In other words, the pressure of the bourgeoisie will find a direct expression in this component of the parliamentary majority.

To avoid the fracturing of this majority, and thus the fall of the government, the FI would be pushed to revise its programmatic objectives. But the pressure of the bourgeoisie would not cease: it would constantly demand new concessions, which would lead the FI along the path taken by Podemos in Spain in its participation in the PSOE government. Through its programmatic concessions, Podemos has destroyed much of the support it had won among the most radicalised layers of Spain's youth and working class.

It could be argued that the PSOE in Spain has many more MPs than Podemos, while the FI has reserved a large majority of the 'winnable' seats for itself. But this does not solve the problem we raise, because - according to the constitutive agreement of the NUPES - it is completely impossible that the FI deputies will have a majority in the National Assembly in June. If the NUPES wins the elections, the parliamentary majority will depend, mathematically, on the PS and Greens MPs. However, once elected, the latter will invoke “compelling” circumstances to challenge the NUPES programme.

We are not opposed to agreements between the FI, the PS and the Greens in any and all circumstances. For example, withdrawal agreements in the second round could have been justified in some cases. But the scale of the NUPES founding agreement puts the FI in a situation where, if it leads the next government, it will be under pressure from a decisive part of its own majority. This is the fundamental reason for our opposition to this agreement.

That being said, a victory for the NUPES is far from a foregone conclusion. Among the mass of youth and workers, the PS and the Greens are enormously discredited. It is true that millions of them will still vote for the NUPES, because it is dominated by the FI and includes key demands from its programme. But it is possible that a significant fraction of the youth and the working class will abstain - or, as in the presidential elections, vote for the National Rally (RN).

An alliance with the Greens and the PS is not likely to mobilise the millions of exploited and oppressed who faced with successive betrayals of these two parties / Image: MathieuMD, Wikimedia Commons

This is the other problem posed by the NUPES: an alliance with the Greens and the PS is not likely to mobilise the millions of exploited and oppressed who, faced with the successive betrayals of these two parties, have voiced their frustration in abstention or in the RN vote. Moreover, a fraction of Mélenchon's electorate in the presidential elections will be demobilised, for the same reasons. Given Fabien Roussel's dismal presidential campaign, even the participation of the Communist Party (PCF) in the NUPES is not likely to arouse much enthusiasm in Mélenchon's electorate.

On the ground, there is a certain demobilisation of FI activists in constituencies that were allocated to the PS, the Greens and the PCF. This was to be expected.

Among FI activists, there is a “pragmatic” argument that can be formulated as follows: “NUPES may not arouse general enthusiasm, especially in the 220 constituencies reserved for the PS, the Greens and the PCF. But thanks to this agreement, the FI will win more seats than it would have won in an election campaign conducted under its own flag. Tactically, it is a good plan.” We are unconvinced. Given the respective scores of the NUPES’ constituent parties in the presidential election, a radical campaign by the FI under its own flag would certainly have achieved good results.

But this misses the main point. Even if we assume it to be correct, the “pragmatic” calculation subordinates FI's strategy entirely to the sole objective of obtaining a maximum number of deputies - to the exclusion of all other considerations. But there are many other considerations at stake in the struggle against the right and the ruling class.

Firstly, the NUPES weakens the FI organisationally: in the constituencies reserved for its partners, many activists are quitting. This is all the more regrettable as the FI recorded a significant wave of membership before and after the first round of the presidential elections.

Secondly, the NUPES is an obstacle to the progression of the FI among the millions of workers, unemployed and poor who, following the betrayals of the “old left", abstained or voted for the RN.

Finally, the FI leadership should explain the need to prepare large social mobilisations in the form of demonstrations and strikes, without which no victory will be possible for our class.

[1] What is most significant in this respect is not what the Greens and the SP agreed to sign; rather, it is their resistance to some of the FI's formulations. For example, in the agreement signed with the SP, “ecological planning” was transformed into a “planning approach”. For the average “socialist” politician, the idea of “planning” evokes a hellish world in which the market economy can no longer act freely. The mention of an ‘approach’ offers the reformists the possibility of turning back before crossing the threshold to economic planning.