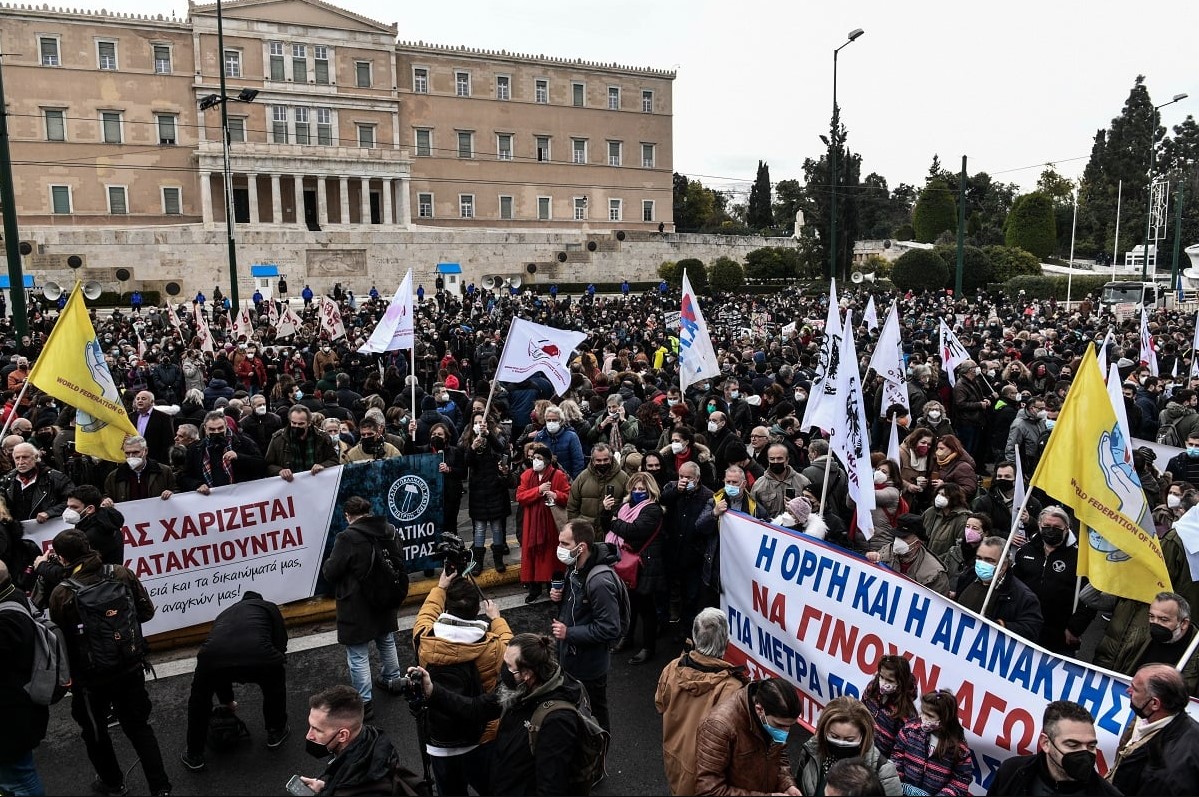 A recent wiretapping scandal has highlighted the advanced rottenness of the Greek ruling class and its government. Described as the ‘Greek Watergate’, it is alleged that a long list of journalists and opposition politicians had their phones bugged by the state. Coupled with high inflation, which is suffocating the living standards of the working class and the poor, the rotten New Democracy government is wracked by multiple crises. It is in this context that a one-day general strike begins tomorrow.

Internationally, we see a wave of inflation resulting from the deep crisis of the capitalist system, exacerbated by the aftermath of the COVID-19 pandemic and the war in Ukraine. In Europe, inflation is breaking new records every month. In Italy in October, it reached 11.9 percent, which is the highest rate since 1984; and in Germany, it hit 10.4 percent, the highest since 1945. In Greece, the media celebrated because inflation was ‘slowing’ in the same month (from 12 percent to 9.8 percent), but the prices of many basic products rose well above the base inflation rate, with energy up 20.8 percent, and food, drink and tobacco up 12.8 percent.

In the face of the ongoing price rises, the government continues to systematically cover for the profiteering ruling class that is robbing the people. After months of enduring rising prices (which were already going up long before the start of the war in Ukraine) and witnessing the state’s scandalous subsidies for the electricity companies, came the so-called ‘household basket’ scam.

The six large supermarket chains that control 85 percent of the food market presented a hamper of basic goods (food, cleaning products, etc.) as being part of a government relief programme. However, when consumers looked into it, they discovered that this was a scam, as all of the products were merely taken from existing offers with no additional discount. The deceptive ‘household basket’ just added more fuel to the people’s rage in the face of this mockery by the government.

The 24-hour strike by the General Confederation of Greek Workers (GSEE) and the Civil Servants’ Confederation (ADEDY) is an opportunity to express in a coordinated and massive manner the anger of the working class against the profiteering bosses and their servile government. That is why every worker should actively participate in the strike and accompanying rallies to declare decisively, “no more!” as a first step in the necessary ongoing struggle to drive out this reactionary government as soon as possible.

Unfortunately, these are not the intentions of the GSEE and ADEY leaders. Once again, they are hoping a 24-hour strike will let off some of the workers’ steam, without having to carry on any serious effort to further the struggle. This has been their method for years. The latest example of this tactic was the strike of 6 April, which despite the big talk from a section of the union leadership about “escalation”, was not followed up with any concrete escalation initiative. This attitude is in full alignment with the policy of symbolic opposition to the ND government exercised by the parliamentary groups of the left parties.

Against the intentions and tactics of the trade union and its political leadership, workers and rank-and-file trade unionists must demand the immediate escalation of the struggle, with a 48-hour general strike in early December. This must be well prepared for, with general assemblies and strike committees in all unions and workplaces. It requires the creation of a mass united front, with the joint action of all unions and mass parties supported by the working class and that have declared support for the demands of the labour movement (SYRIZA, KKE, MeRA25).

The appropriate demands against this great robbery being conducted by all sections of the capitalists at the expense of the working class, are as follows: