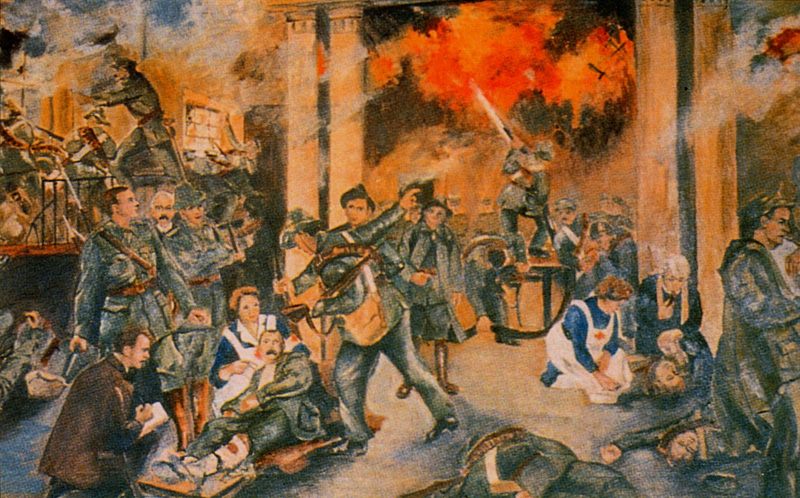 At Easter every year in every parish in Ireland and in many places around the world Irish Republicans gather to pay homage to those men and women who died in the struggle for independence. This year, 2012, will be no different. However, whereas 50 years ago there was only one Republican Movement, today there are at least seven different republican traditions that have emerged out of the northern struggle.

All will march separately to graveyards to pay their respects to the dead and articulate their message as to why people should follow their particular form of Irish Republicanism. Some will make class appeals. Others will make nationalist appeals, while others will argue that their way is the “only show in town” and that the full implementation of all the outgoings of the Good Friday Agreement will achieve national independence. So called ‘dissidents’ will vehemently disagree with that latter argument and some of them will maintain that the only road ahead is that of armed struggle.

All, however, base themselves on the proclamation of Easter 1916 in particular which said:

“We declare the right of the people of Ireland to the ownership of Ireland, and to the unfettered control of Irish destinies, to be sovereign and indefeasible. The long usurpation of that right by a foreign people and government has not extinguished the right, nor can it ever be extinguished except by the destruction of the Irish people. In every generation the Irish people have asserted their right to national freedom and sovereignty: six times during the past three hundred years they have asserted it in arms. Standing on that fundamental right and again asserting it in the face of the world, we hereby proclaim the Irish Republic as a Sovereign Independent State, and we pledge our lives and the lives of our comrades-in-arms to the cause of its freedom, of its welfare, and its exaltation among the nations.” 1

The Easter proclamation is a powerful and moving document, 96 years old, yet still capable of inspiring young people to take up arms in pursuit of the goal of an independent Republic. In its time it was, and still is, a progressive document, advocating universal suffrage, equal rights for all and a republican form of government.

In modern politics as expressed by the parties of the ruling class, this is known as control-freakery and spin doctoring. Dissent is not tolerated and loyalty to the ruling clique/or leader is paramount. Those who question are demonised, accused of stealing, drug-taking, drunkenness or even of being ‘intellectuals’.

They are ‘touts’ or agents of a foreign power or whatever it takes to isolate, undermine, and reduce the influence of those who question. Ideas are not challenged, but personalities are attacked and slandered.

Such tactics naturally provoke a response, but within Irish Republicanism that response has been generally negative. Rather than establish a clearly defined goal and outlining the steps to reach such goals, dissenting Republicans tend to attack the leaderships of the dominant provisional republican movement.

Some, sadly, have become obsessed with that body and never miss an opportunity to verbally attack PSF. Negativity rarely works.

Since 1994 this writer has argued that republicanism has suffered a major defeat. That is ever more so today with the failure of fellow republicans to co-operate even on the most basic of things like support for political prisoners like Marian Price and others. Initiatives in the past to bring Republicans into a common forum have broken down because some feared contamination by mixing with those Republicans who support armed struggle. Rather than begin a process of persuasion by example, argument and debate, people retreated into their own safe little republican sects. That is part of the reason there are now so many different republican traditions. (If that process keeps up there soon may be as many republican sects as there are Trotskyist/Stalinist/Maoist tendencies!!!!)

In relation to aspects of armed struggle there is an argument to be made. Unfortunately, that argument is not being made or articulated. It is as if the deed itself speaks and is the only argument. The Red Plough is opposed to armed struggle at this time in Irish history. This is not 1916, nor indeed the early 20’s or the 50’s or the 70’s or 80’s. Time, conditions, people and economies have moved on and changed. Technology has in the past twenty years transformed the way we live our lives.

We have argued consistently that the only road is the political road 2. Politics by ideas and deed is the way forward.

That is why we argue that for republicanism to win the mass of the Irish people to its ideas and thoughts it must embrace the radical and progressive ideas of socialism. It is true that most, if not all, the differing republican traditions pay some form of homage towards socialism. But that is more in word than in deed. At the heart of the ideas of socialism is the working class. Class struggle is the motive force of history. Speaking about the Easter rising, Lenin, who knew a little bit about revolution, wrote:

“Whoever calls such an uprising a ‘putsch’ is either a hardened reactionary or a doctrinaire hopelessly incapable of picturing a social revolution as a living thing.” 4

“For to imagine that social revolution is conceivable without revolts by small nations in the colonies and in Europe, without the revolutionary outbursts of a section of the petty bourgeoisie with all its prejudices, without a movement of politically non-conscious proletarian and semi-proletarian masses against landlord, church, monarchical, national and other oppression – to imagine that means repudiating social revolution. Very likely one army will line up in one place and say, ‘We are for socialism’, while another will do so in another place and say, ‘We are for imperialism’, and that will be the social revolution! Only from such a ridiculously pedantic angle could one label the Irish rebellion a ‘putsch’.

“Whoever expects a ‘pure’ social revolution will never live to see it. Such a person pays lip service to revolution without understanding what revolution really is.” 5

The class struggle is not simply a clear class battle between workers and capitalism lined up in opposition. It is a living thing existing day by day and taking many shapes and forms. The 1916 Rising was part of the class struggle because the struggle for national self-determination is so interwoven with the class struggle that in Connolly’s words:

Much has been written about how the people of Dublin booed and heckled the prisoners as they were marched through the streets of Dublin. Yet even here the class struggle breaks through:

“I have read many accounts of public feeling in Dublin in these days. They all agreed that the open and strong sympathy of the mass of the population was with the British troops. That this was so in the better parts of the city, I have no doubt but certainly what I myself saw in the poorer districts did not confirm this. It rather indicated that there was a vast amount of sympathy with the rebels particularly after the rebels were defeated. The sentences of the Court Martial deepened this sympathy.” 7

Today that class struggle is going on all over Ireland. It is in the struggle over the property tax on households, in the worker occupations of buildings closed by the politics of Austerity, in the struggles to defend the public services from privatisation and in the prison struggles. These and many more struggles are interconnected. Of course, there will be some sects on the left who deny this and demonise those who come from a wholly republican background. But that is no excuse for republicans themselves to walk away from these issues. The struggle is all embracing. James Connolly did not take part in the uprising for a ‘free Ireland’. He was very clear:

"We are out for Ireland for the Irish. But who are the Irish? Not the rack-renting, slum owning landlord; not the sweating, profit-grinding capitalist; not the sleek and oily lawyer; not the prostitute pressman – the hired liars of the enemy... but the Irish working class.”

That was central to his thinking. Connolly did not take part as some kind of so called “blood sacrifice” – an idea put about by reactionary elements to undermine the class nature of Connolly’s participation in the 1916 Rising. Rather it was to spark the working class into action. No one today accuses the USA’s Thomas Jefferson of being bloodthirsty because he wrote: “The tree of liberty must continually be watered with the blood of martyrs and tyrants” 8

War is by its nature ugly. It destroys. It destroys men women and children. It destroys buildings and wrecks economies. War leaves barren devastation not only on the land but in the hearts and minds of people. There is no romance or glory in war.

Today the greatest terrorists are the Imperialists and their lackeys. Since the Second World War US armed forces have been in continuous action in suppressing uprisings, left-wing regimes, and controlling oil and natural resources for the benefit of US capitalists. The so called ‘terrorist’ actions of a few Irish Republicans pale into insignificance when compared to the continuous crimes of Imperialism. Nevertheless Irish Republicans have always been demonised. It goes with the territory! Some argue that this is because of the threat that armed actions pose to Imperialism.

There is, however, a counter-argument to that which says that British Imperialism welcomes armed struggle from Irish republicans. It helps sharpen their intelligence services and training and also because they know it can never attain its goal without the overwhelming consent of the Irish people. What they do fear is the spread of republican and progressive ideas among the mass of the population, catholic and protestant Irish and British.

And there are great opportunities to do just that. The political cement that has held Western capitalism together since the Second World War is crumbling. In the current world crisis of capitalism there are few crumbs our masters can throw to the masses. Rather they need to exploit every last bit of labour they can for the cheapest price. It is the working classes who are paying the price for the collapse of the system.

Austerity faces the working classes for the next generation. However, that has a political price and it is the increasing disillusionment of the working classes with the political parties who push austerity. The demise of Fianna Fail and the rise of both independents and provisional Sinn Fein in the south of Ireland is a clear example of that. Both Labour Parties in Britain and Ireland are committed to austerity. Hence, the shock to the British Labour Party when George Galloway romped home in the Bradford West By-election. It was here that the local Labour controlled council pushed through £67 million in cuts, axing over a thousand jobs. No wonder there is growing disenchantment with these so called progressive parties.

In the North of Ireland the power sharing executive presides over the collapse of the national health services and the cutting of the public sector. Unemployment is growing particularly among the youth and more and more businesses are going bankrupt.

There has never been a better time in Ireland to work towards the unification of the left and progressive forces and work towards building a revolutionary alternative. Of course it will not be easy but it would be good if at least republicans articulated a desire to see such a coming together. It would be good to hear from the differing republican traditions this Easter in statements to the effect that they were prepared to cooperate with others and work towards building a broad front that could work on both the class and national questions.

After all, both the Easter Proclamation and the Easter Rising were the products of a coming together of the forces of socialism and republicanism. Is it too much to hope that this Easter a small beginning could be made by Irish Republicans?