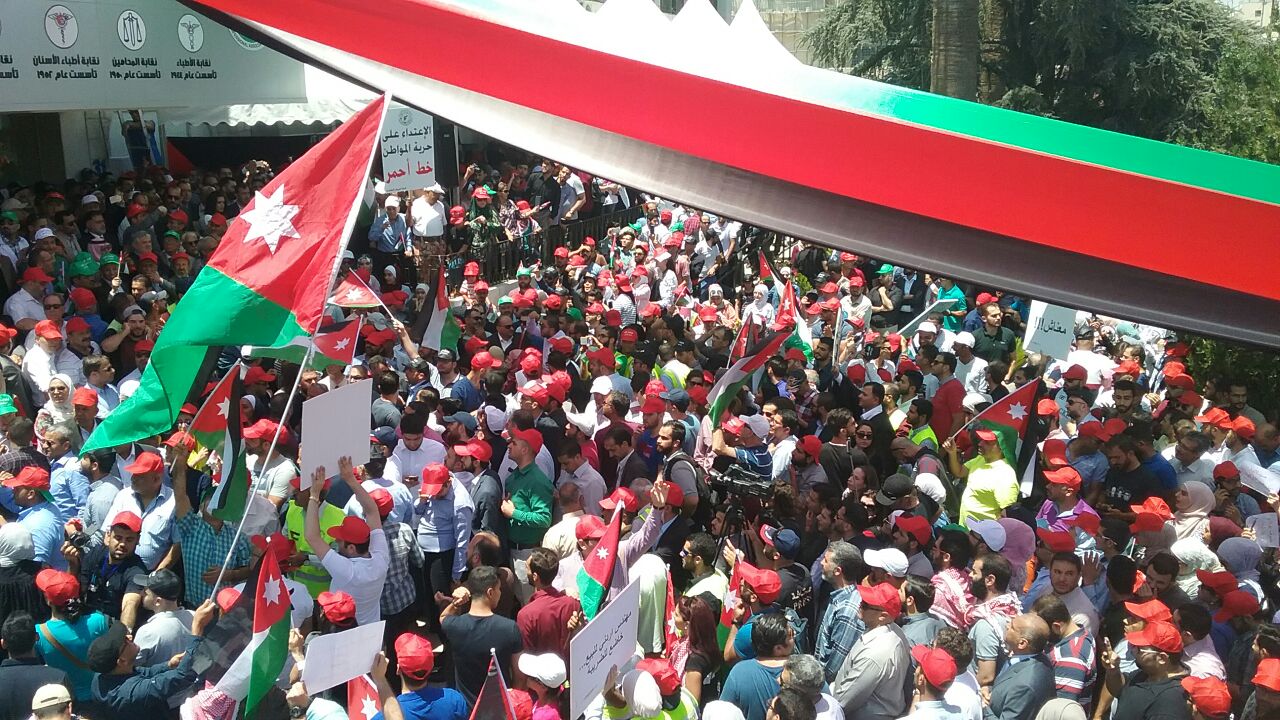 On Monday June 4, the Prime Minister of Jordan, Hani al-Mulki, was forced to resign. This came as a result of a growing mass movement, which has shaken the country to its core.

The movement began last Wednesday after the government announced plans to raise income taxes across the board, as well as introducing them for the first time for low income earners. This proposal comes in a situation where the workers and poor, as well as the middle layers, are already struggling with big price hikes. Just to name a few, after the scrapping of subsidies, bread prices doubled earlier this year and fuel prices increased significantly. Also, electricity prices were raised multiple times and now, just as the summer heat is approaching, they stand 55% higher than at the beginning of the year!

This dire situation has radicalised layers of the population that had previously been pillars of stability. Thousands responded to the call of the country’s unions to strike, including government employees, doctors, journalists, teachers, lawyers, pharmacists, engineers, but also small traders and others. This was one of the biggest protests since 2011. Significantly, the participants were not mainly activists, but thousands of people who had been apolitical until now and who have been brought out onto the streets by the unbearable conditions of life. The main slogan was “I strike today to live tomorrow”, but there were also slogans that echoed the Arab Revolution of 2011, such as “the people want the fall of the government”.

Amazingly, the reaction of the government to the movement was to announce new cuts on subsidies – a clear provocation. On Thursday, they announced price hikes for electricity of 18% and fuel of 5.5% to go into effect the following day!

That was the straw that broke the camel’s back. Thousands of workers came out on strike again and took to the streets joined by students. The movement spread from the capital Amman to the whole country. There were demonstrations in all the big urban centres, including Salt, Tafila, Ma'an and Zarqa. In Irbid, in the country's north, as well as in Aljun, protesters burned tyres to block the main roads. This is an unprecedented situation and the first time that a mass movement has gripped all the big cities and towns around the country. There were also clashes with the police when around 2000 people in Amman tried to march on the prime minister’s office when the police attacked demonstrators with tear gas and baton charges. Clearly the situation was heating up.

Protesters also chanted folklore songs after injecting them with political messages like this one that depicted the government as "a bunch of thieves":

This forced the king, Abdullah II, to intervene. He ordered the cancellation of the planned cuts on subsidies. But this did not stop the movement. On the contrary, the movement gained a sense of its own strength and only grew bolder. So on Monday, in a desperate attempt to stop it, the king also fired the hated prime minister. For the moment, many of the people that have been thrown into the struggle for the first time are in a cheerful mood with some illusions in the role of the monarchy. The Crown Prince tried to strengthen these illusions by coming out onto the streets and calling on the police to “protect demonstrators and preserve their right to express themselves”. But it is clear that this is nothing more than a manoeuvre whose aim is to give certain cosmetic concessions, such as the sacrificing of some heads, in order to preserve the whole regime. But this will not be easy.

As the new government has called on the unions for dialogue, the radicalised masses have smelt blood. In an Interview with Middle East Eye, this sentiment was clearly expressed by the young protester Deema Kharabsheh:

“People brought down the government. It didn’t resign voluntarily. Changing people doesn’t solve a problem. We will stay in the street until we can accomplish our goals of changing the economic policy which has resulted in citizens being unable to pay for the basic needs for life”

Room for the new government to give concessions is very narrow. The new income tax law, as well as the constant attacks on the subsidies of essential goods, can only be understood as part of the effort by the government to cut public debt, which stands at around 90% of the country’s GDP. This is a key condition for the International Monetary Fund (IMF) to provide loans for the cash-strapped Jordanian state.

"We could not fight poverty, so we will fight poor people."

The country is struggling economically and is suffering particularly from low levels of foreign investment, to the point where there are rumours that the government provoked the protests in order to get the Gulf States and their corrupt ruling monarchs to throw money at the economy, out of fear of revolts in their own countries! If that were true, the Jordanian ruling class is not only very desperate, but also very stupid. One thing is very clear, however: on the basis of capitalism and its crisis there is no other policy for the rich and powerful. The new prime minister, Omar al Razzaz, is a former World Bank economist. Also for him there is no other policy than to relentlessly attack the working class, the poor and even the middle class layers, which in the past had been relatively privileged.

All this comes in a situation where in the whole region, after years of reaction and the spectre of civil war, the masses have begun to return to mass struggle. The sectarian wars in Syria and Iraq were used for years to discourage the masses from fighting for a better life. But now, in country after country, from Iraq and Iran, to Egypt and Palestine, and now Jordan, this argument is starting to lose its power and the revolutionary traditions and methods of the masses are slowly being rediscovered. This shows the way forward. In the end, the problems of the oppressed workers, youth and poor people in the Middle East can only be solved through mass revolutionary struggle to bring down the corrupt ruling class and capitalism as a whole!