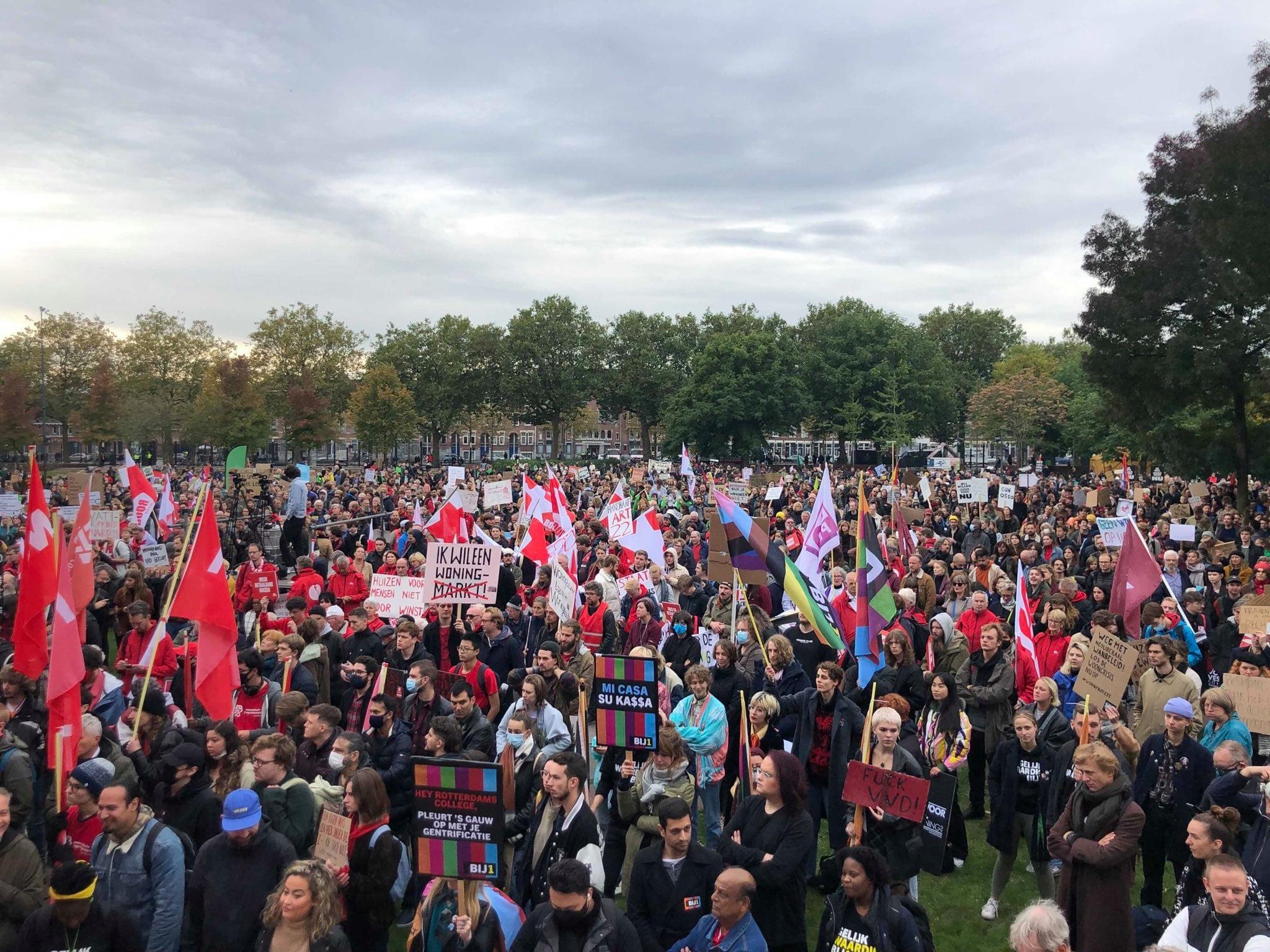 The Netherlands has been shaken up by a series of large demonstrations known as ‘woonprotesten’ (housing protests). On 12 September, the largest housing protest since the 1980s was organised in Amsterdam, with about 20,000 present. The mood was overwhelmingly radical and militant, which expresses the depth of despair and anger at the current housing crisis, and the crisis of capitalism at large.

Activists of Revolutie, the IMT in the Netherlands, were present and noted that the mood was more militant than anything seen in recent years. Their slogans for expropriation were accepted by many young protestors and they could easily sell their material.

The movement built up further with demonstrations in Rotterdam, Utrecht and The Hague. On 17 October, more than 8,000 people attended the demonstration in Rotterdam, which resulted in a violent clash with the police. The police wanted to divide the demonstrators by cordoning off a group of about 50 anarchists from the rest, on the basis of “suspicion that they would be carrying illegal objects”. A police officer was caught on camera saying they “did not want these people in the city centre”. However, this plan failed as the rest of the demonstrators showed their solidarity and refused to move on. The police responded violently to this, by grabbing and beating up protesters. As a result, two people ended up in the emergency room and dozens have been beaten and injured.

This act of sudden violence sent a massive wave of shock and anger amongst people, as for many it was the first time that they have been faced with police brutality. A demonstration was called on 3 November against this police violence, where one of the speakers said:

“They have deprived thousands of people of their right to protest. People were injured, traumatised. The police have put people at risk instead of protecting them.”

This shock comes on top of already developing militant ideas, especially amongst the youth, who are increasingly questioning the current system. This is no coincidence. It is the result of the absurd situation on the Dutch housing market, where affordable housing is essentially a scarce commodity. 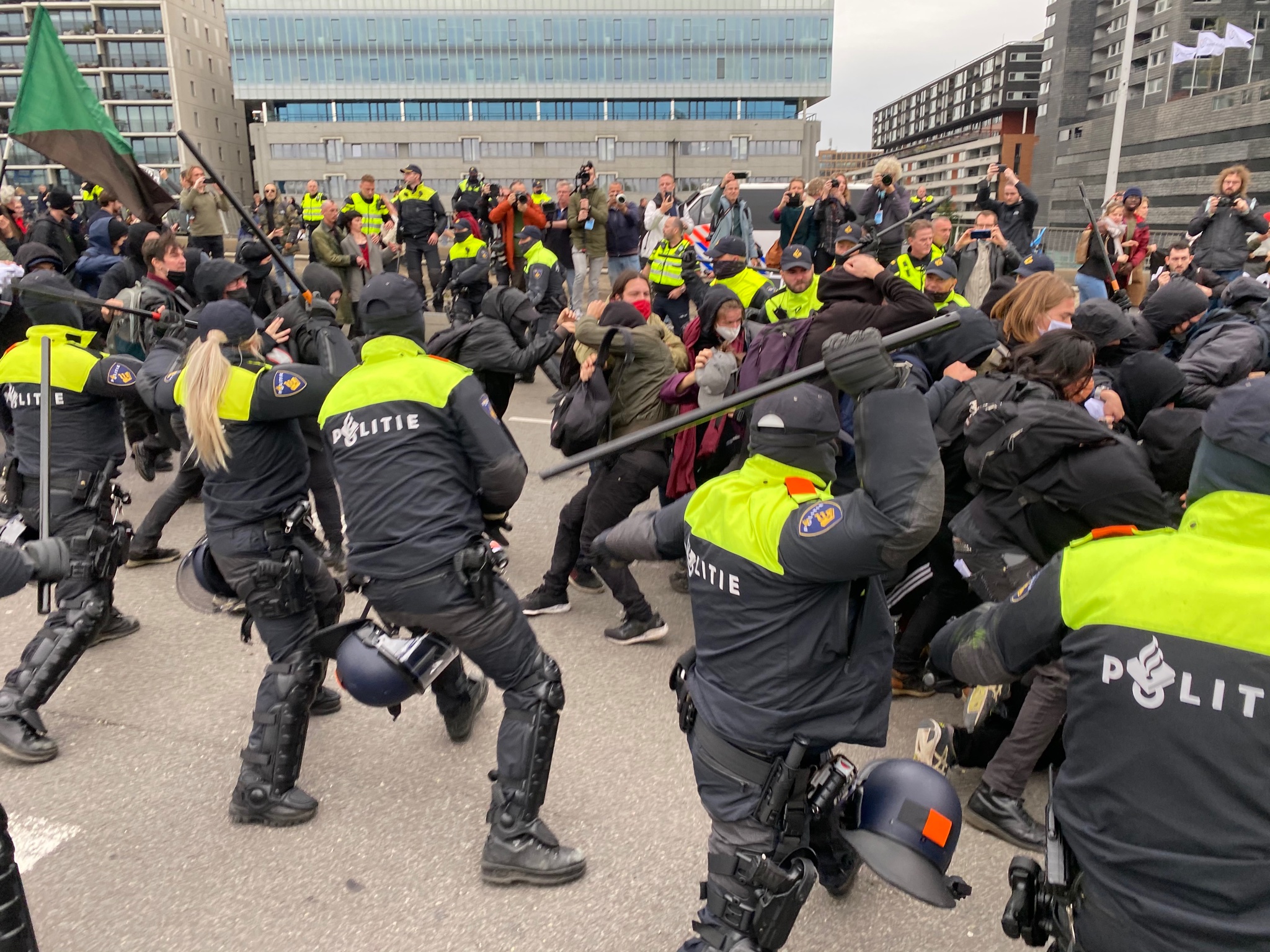 The police responded violently to the protests, by grabbing and beating up protesters / Image: Arjen van Veelen, Twitter

But added to this is brewing anger about the accumulated student debt. In 2015, the government decided to move away from grants and implemented a loan system. This resulted in a huge amount of student debt for a whole new generation. Students also need to inform the bank about this debt whenever they apply for a mortgage. A 21-year old student who is worried about the future said: “Nowadays it is no longer easy to take out a mortgage with a student loan. The housing market is completely closed.”

Dutch capitalism, despite its enormous wealth, fails to realise the basic right of housing for a huge number of people. The average purchase price for an existing owner-occupied home in the second quarter of 2021 was around €410,000, and a new-build home was €450,000. House prices have risen on average by 16 percent in the past year.

Low ECB interest rates and economic support packages have only further inflated the bubble. Investors buy up entire blocks of homes before young couples even have a chance, then divide them up through the buy-to-let system and rent them out as private sector apartments. Buying is therefore not an option for many young workers. However, neither is renting!

There is an acute shortage of social rental housing. Between 2013 and 2018, the social housing stock shrank by 100,000, as corporations continued to sell properties in order to remain 'profitable'. Homelessness has increased sharply in only a few years to at least 40,000 people, which is an increase of about 75 percent. There are 60-80,000 people forced into temporary shelters. Hundreds of thousands of people spend years on a waiting list for social housing - some waiting lists are even longer than 17 years.

The private sector rent is also not an option. In most cases, the rent in the private sector is half the income of the tenants. About 800,000 people are paying a disproportionate amount of rent compared to their income. And because of the inaccessible housing market, currently there are 900,000 20-to-35-year olds forced to still live with their parents, which is 200,000 more than in 2010.

This is an intense, desperate situation for a nation that prides itself on providing people with the best quality of life. But in reality, the next generation sees no way to ever buy a house and have enough money left to live a ‘decent middle-class life’. That ideal is long dead amongst the youth.

This is something that worries the strategists of capital, as it undermines the trust in Dutch capitalism. For decades, the capitalist governments stimulated home ownership, so the middle-class and better-paid workers could afford to buy their own houses with a mortgage and ‘live the middle-class life’, while rising prices meant they could sell their homes off after retirement for much more than the original value. This has led to many illusions in the system.

In practice, this meant an explosion of private debt. In the second quarter of 2021, mortgage debt amounts to almost €765 billion euro. Total household debt is equal to 230 percent of Dutch GDP, which is becoming an unstable factor in the situation. Also, while the rising housing prices were partially beneficial for those who already owned their house, this pyramid scheme of increased debt and stimulus measures could not go on forever. It has now dialectically turned into its opposite, in a barrier to home ownership and a factor that leads to radicalisation and distrust in the system.

There have been problems with housing shortages since World War II. Dutch capitalism has never been able to solve this problem, only to kick the can down the road with all kinds of measures that have now been turned into their opposite. All the stimulus measures of recent years, such as tax-free gifts from parent to child, or extra first-time loans, have only pushed market prices further up.

The 2008 credit crisis halted the construction of new houses, because this became less profitable due to the reduction in the number of mortgages. However, the need for housing did not diminish of course. It took years before construction started again, partly because many construction workers had already been retrained for other jobs.

All of the above mentioned issues clearly show how when left to the market economy, where profits are put above social need, created the biggest housing crisis the Netherlands has ever witnessed. 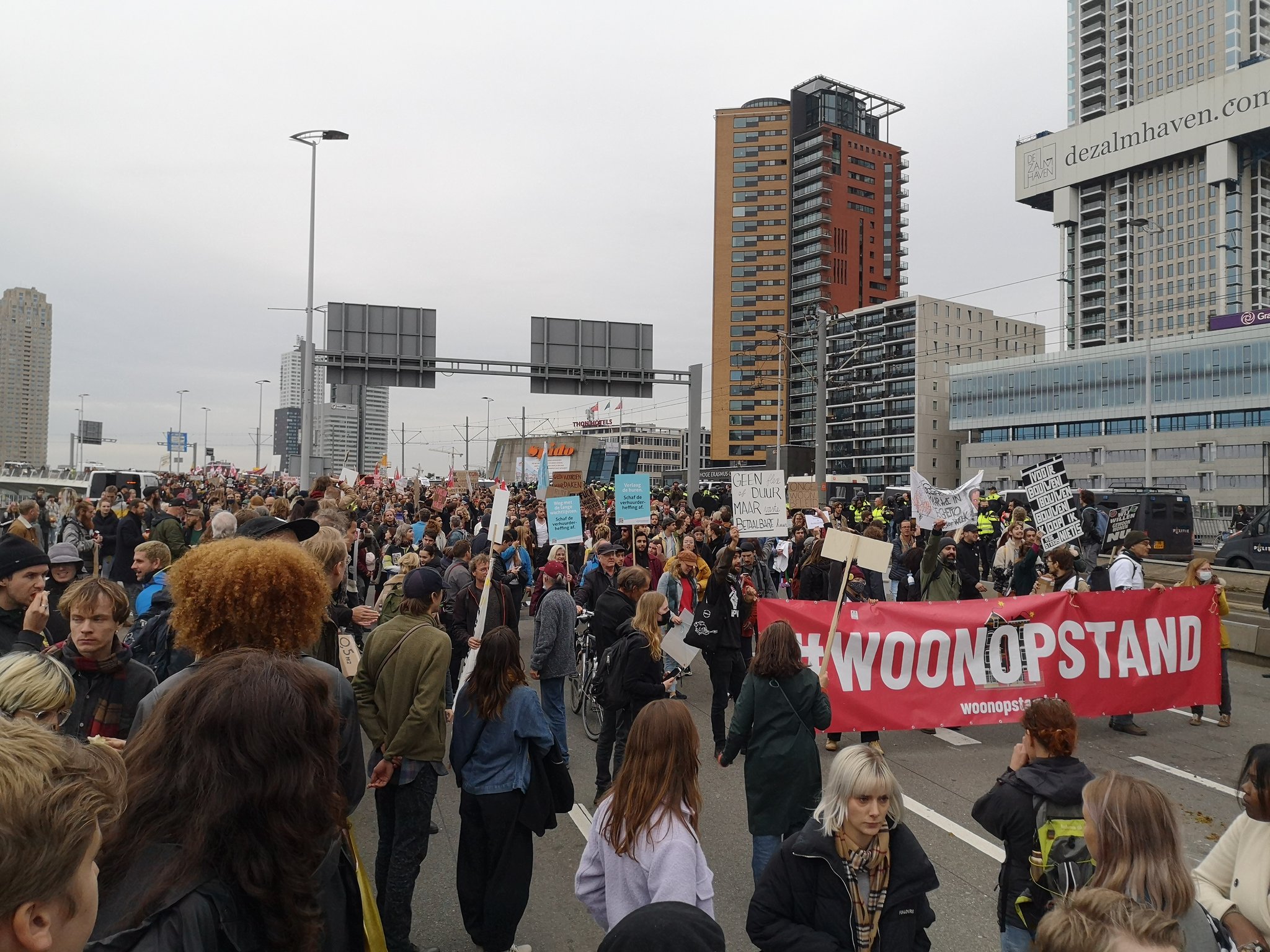 We urgently need a democratic housing plan, in which social needs come first. That requires the nationalisation of the land, of the mortgage lenders and of the large construction companies / Image: Latif Tali, Twitter

This is why we urgently need a democratic housing plan, in which social needs come first. That requires the nationalisation of the land, of the mortgage lenders and of the large construction companies. Without control over these means of production, no plan can be made. However, it is not a matter of just adding extra houses. There is also a huge amount of existing empty living space and empty office space that can be used efficiently by converting them into affordable housing, and of existing property that is unaffordable. Landlords need to be expropriated for this. The most infamous landlord is Prince Bernhard Jr., the cousin of the Dutch king. He has been in the spotlight recently for owning over 600 houses in the Netherlands.

There is nothing rational about this system, and this is what needs to be exposed and explained. There is an alternative.

The movement has spread to cities around the country and this is a positive development. It is clear that something must be done. Even the capitalist parties are forced to recognise this. After all, it is not only the material shortage of houses that halts mobility in the economy, but also the mistrust of capitalism itself, which poses a danger to the system as a whole.

More than 100 municipal councils have already implemented rules that restrict the buying of new properties to people that will actually live there. This restriction of property rights was considered too extreme by so-called left-wing parties a few years ago, but is now becoming common. We can also expect measures to artificially deflate the bubble by raising interest rates on mortgages through cuts on mortgage subsidies and tax shifts. These will not solve the problem in the long run however, as the problem is the irrational capitalist system itself.

The next step for the movement is to involve broader layers, through setting up democratic local committees that can plan actions and decide the course of the movement. Strong links need to be made with the student movement and above all the labour movement, which has the power to shut down the capitalist system. Above all, there needs to be a fight for a clear socialist programme that fights against the root cause of this huge problem.