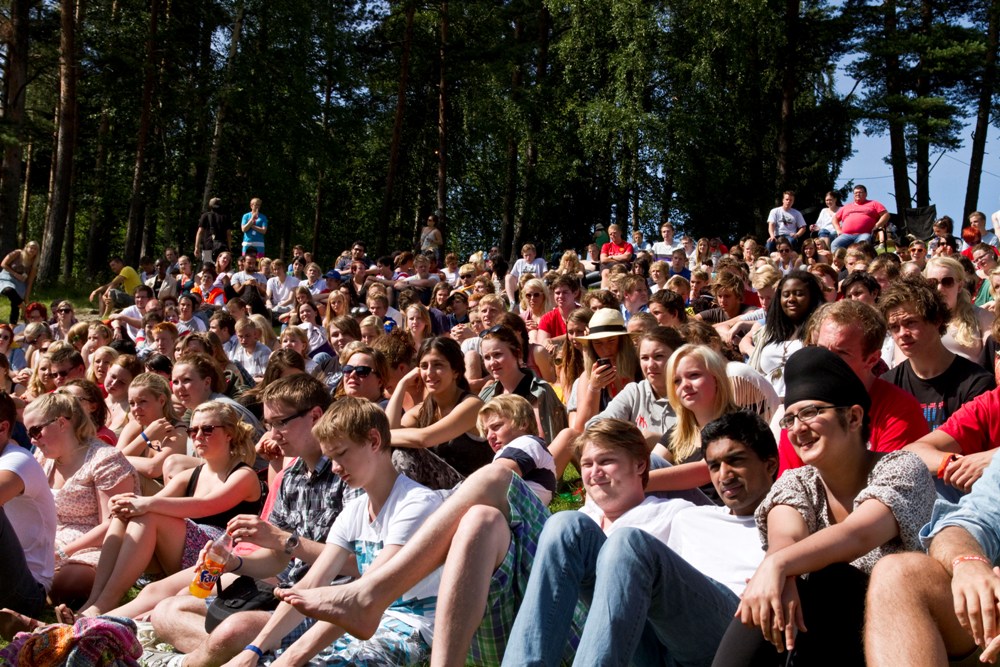 World public opinion has been shocked by the news of the bloody massacre in Norway. At least 91 people have been killed, including 84 members of the Labour Youth Organisation (AUF) in a summer camp.

The massacre began with a bomb blast in Oslo that killed seven people. But the real bloodbath took place a little later on the island of Utøya, where hundreds of young people had gathered for a summer school of the Labour Youth (AUF). The island was given to them by the trade unions of Oslo and is a place of great symbolic importance for the whole labour movement.

“He travelled on the ferry boat from the mainland over to that little inland island posing as a police officer, saying he was there to do research in connection with the bomb blasts,” NRK journalist Ole Torp told the BBC. Another eyewitness explains that he arrived claiming he was a police officer and was there to talk about the bombing in Oslo and when he had gathered enough people he started shooting.

In a horrific moment, young people in bathing costumes were mown down. In scenes of indescribable panic, they jumped into the sea to save themselves and were shot at as they tried to swim away from the scene of carnage. Others cowered behind rocks or hid in caves, terrified, as the gunman proceeded to shoot one defenceless person after another.

Several victims pretended as if they were dead to survive. But after shooting the victims with one gun, the gunman shot them again in the head with a shotgun. The Norwegian press this morning showed pictures of beaches covered with bodies. These were the actions of a cold and calculating killer.

Who is Anders Behring Breivik?

Utoeya. Photo: whoelse_north The finger of blame was immediately pointed at al-Qaeda. Who else could it be? The possibility of such attacks by Islamic extremists was always there, given that Norway has sent troops to Afghanistan, and this is backed by the Norwegian Labour Party and not opposed by its youth organisation. President Obama lost no time in conveying his most sincere sympathy, and making good use of the opportunity to drum up support for continuing the “war on terror”.

Such has been the effect of the propaganda campaign since 9/11 on the public psyche that terrorism is immediately associated with men with a dark complexion dressed like Arabs or Afghans. However, the information subsequently released immediately exploded this theory. It was revealed that the Labour Party Youth (AUF) camp was attacked by someone described as a man with blond hair and of Nordic appearance, dressed in a police uniform. The murderer is neither a Muslim nor a member of al-Qaeda but a member of the Norwegian middle class.

Anders Behring Breivik is a Norwegian petty bourgeois. He went to business school in Norway and runs a small business. He was evidently not short of money, as he bought a farm, on which his small business was run, which had previously been used by elements in the criminal underwold as a marijuana plantation. The plantation was also connected to a famous bank robbery (NOKAS robbery). Probably in preparation for yesterday’s events Breivik bought six tonnes of artificial fertiliser, which is commonly used for home-made bombs, on May 4th, using his farming business as cover.

He is also a right-wing extremist. He was an active member of the racist Fremskrittspartiet, which is currently running at 20% or so in the polls, and their youth organisation, supposedly for 10 years, until 2007. He's an opponent of multi-culturalism and viciously anti-Muslim. He has apparently suggested recreating the US Tea Party in Europe and expressed support for the English Defence League. He wrote things like:

He calls former prime minister Gro Harlem Brundlant a "fatherland killer”, for having put forward the idea that anyone who lives in Norway is a Norwegian. He also constantly refers to how “Marxists” supposedly have infiltrated everywhere, including culture, schools and the media.

There can be no doubt that this was a political act. The targets were not haphazard, as is usually the case in attacks by mad people. They were carefully selected for political reasons. It seems likely that the main target was The Labour Norwegian Prime Minister Jan Stoltenberg. Hundreds of young people were awaiting a speech the prime minister was to give there today.

The international media is unanimous in regarding these atrocities as the act of a “mad gunman”. In this way they try to draw attention away from the political content of these events. A madman is not responsible for his actions, which are of a purely random and accidental character. But there was nothing either random or accidental about this.

Norwegian terror “experts” are perplexed at the fact that it was a Norwegian right-wing terrorist that committed the crime and not a Muslim. Some have commented that the Norwegian intelligence services have not given enough attention to the threat of right-wing extremism in the last few years. Did they not know of Breivik’s extreme right wing views?

There are many aspects of this case that are unclear. Did Breivik act alone or was there more than one gunman? The impression was initially given that he acted alone. But there are witnesses saying there was also at least one person without uniform on the island participating in the slaughter. Time will tell. Interestingly, Labour leader Stoltenberg stressed that the police were investigating the possibility of international links.

The leader of AUF, Eskil Pedersen, held a press conference this morning calling the attack an attack on democracy and said that AUF would continue to stand by its values of anti-racism and for democracy and equality. 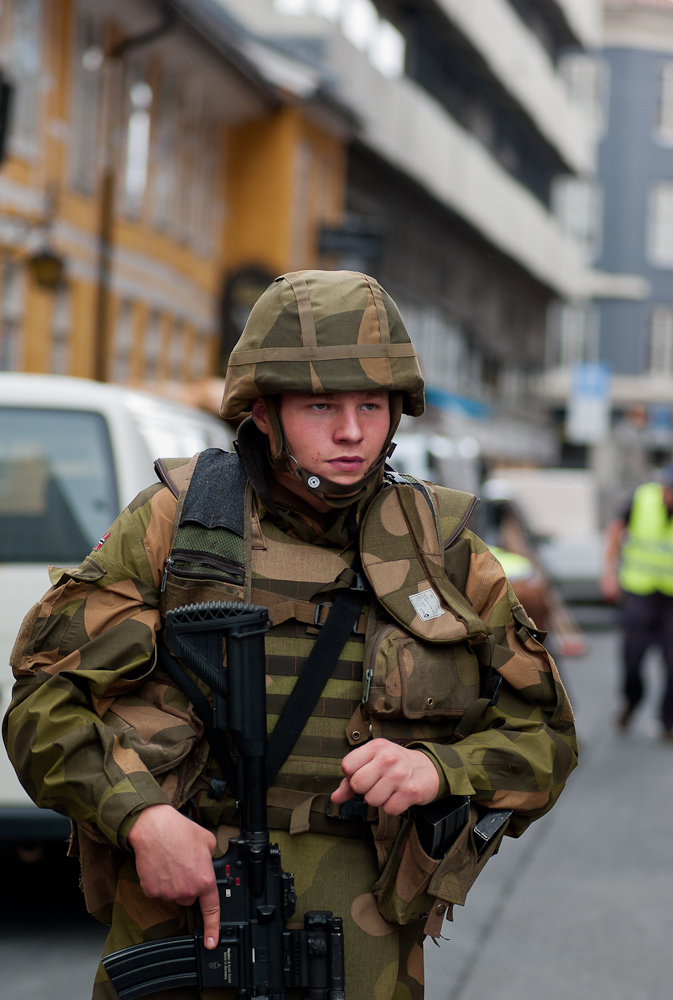 Soliders patrolling the streets of Oslo. Photo: H. K. Nilsen Stoltenberg, the Prime Minister, obviously shaken by this atrocity, told the television cameras: “This is an attack against the Norwegian labour movement, against the Norwegian Labour Party and its youth organisation.” That is absolutely correct. However, this message was immediately diluted by the BBC News, which said it was an attack “against Norway’s political system and Norway’s values.”

Right wing politicians like Sarkozi and Angela Merkel pander to anti-Muslim sentiments to curry favour with the right wing, as do the press, with people like Rupert Murdoch. They encourage extremist and anti-immigrant elements. In the case of Norway, the Conservative Party is preparing to form a coalition government with Fremskrittspartiet, if the present left-wing coalition is defeated at the next election. It is therefore wrong to suggest any kind of agreement with the right wing bourgeois parties to “defend democracy” against the far right.

The Labour leader, having correctly emphasized that this was an attack against the Labour Movement, then went on to say that the matter should be left in the hands of the police. This is a mistake. The state cannot be relied upon to provide effective defence against the fascists. The state intelligence services have ignored the activities of fascist groups, and a section of the state always has fascist sympathies. Blind belief in the efficacy of the state to protect us can lull us into a false sense of security with fatal results.  Let us remember that this assassin was able to commit mass murder because he was dressed as a policeman.

The attack has unleashed an atmosphere of fear that needs to be fought. The Socialist Youth (SU) were forced to cancel their summer camp which was due to take place next week, on the very same island. They have released a statement of solidarity with the AUF, in which their leader, Olav Magnus Linge, put it very well: “for all dead comrades, not a minute's silence, but a life of struggle”.

The attack poses the question of how to defend the Labour Movement and its youth organisations from fascists. The Labour Youth, the Youth Wing of the trade unions, and the Youth of the Socialist Left party should immediately link up to form self-defence committees, linked to the trade unions and the shop stewards committees. Every public activity should be patrolled and defended, and every act of aggression responded to energetically.

The organised working class must learn to depend only on itself. Only the Labour Movement can combat the menace of fascist and right wing groups. But to do so effectively, it must respond to every fascist provocation by mobilizing the full might of the organised working class. The Norwegian Labour Movement is very powerful. It must use its power to teach the fascists a lesson. The Norwegian trade unions should call a 24-hour general strike to protest this attack.

The labour organisations of the world must show solidity by mass action. Commemoration events are now being organised in Sweden. But what is needed is not just an outpouring of mourning but international solidarity action. The unions in other countries should organise protest meetings and demonstrations – starting with Sweden. Let the world see that the international Labour Movement will not be cowed by any fascist aggression, and that we will come out onto the streets to meet any threat to our rights! Let our slogan be: an injury to one is an injury to all.

It is time to wake up! For many years Norway seemed to be an island of peace and tranquility in a turbulent world. Now this comforting illusion has been brutally shattered. The military are now on the streets of the Norwegian capital guarding public buildings, while many families mourn their dead children. The world crisis of capitalism spares no country and no individual. It is, to use the phrase of Lenin, horror without end.