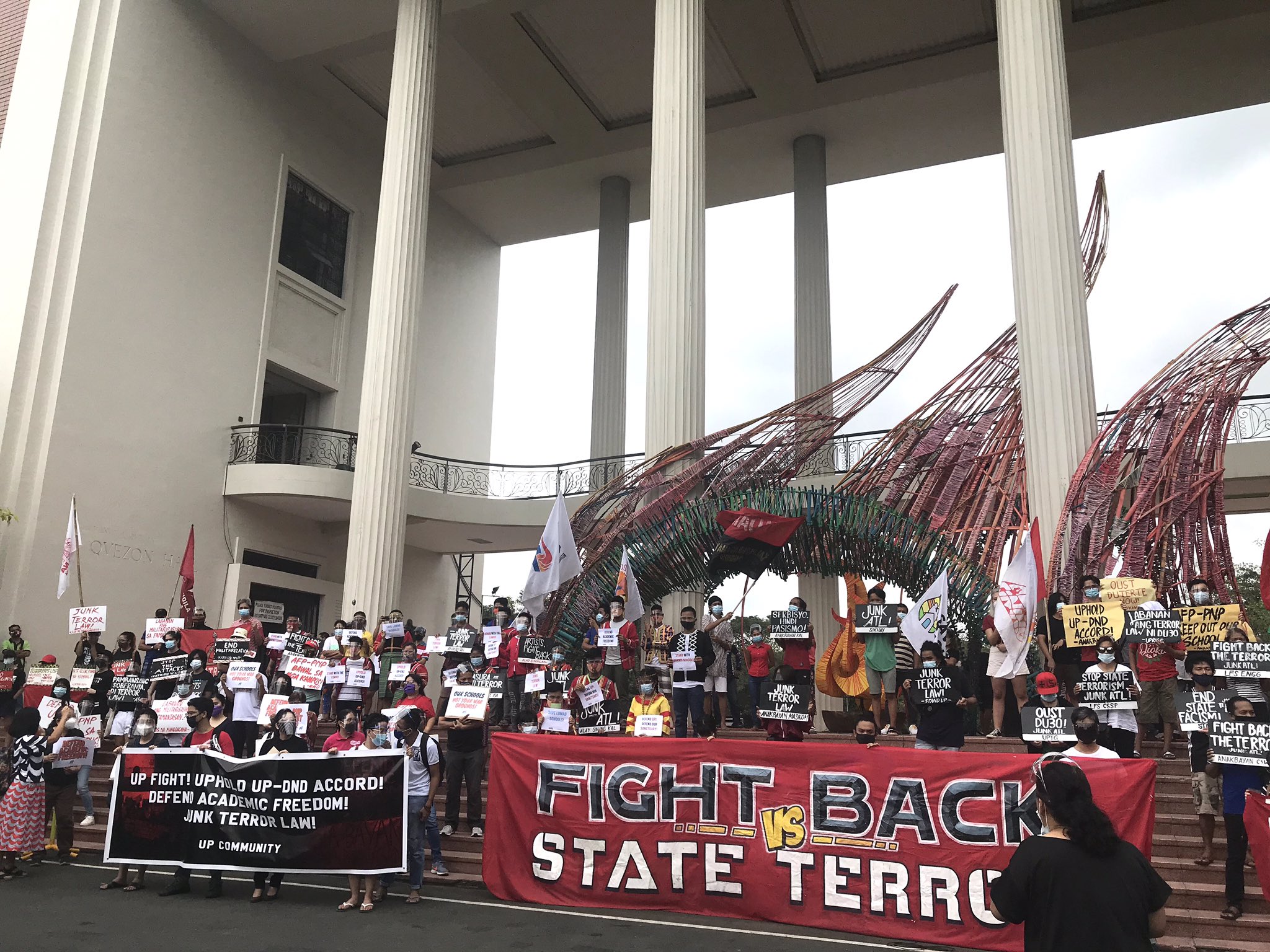 The reactionary regime of Rodrigo Duterte in the Philippines is attempting to harden its crackdown on dissent and consolidate power. Socialists, youth, and workers’ organisations must get ready for a fight.

While Duterte certainly has his own ambitions, the overall strengthening of the Filipino state is primarily aimed at preparing for wider struggles from among the masses. The Philippines has been ravaged by both the pandemic and frequent natural disasters in recent times, along with an economic slump. These factors, along with the poor response to this emergency from the government, could potentially ratchet up frustration and anger within the masses.

Since last year, the Duterte regime and the Filipino military have been conducting a campaign of “red-tagging”: accusing scores of their detractors of being supporters of the Communist Party of the Philippines-New People’s Army’s (CPP-NPA) insurgency in the countryside. This provides a pretence for the state to use the new Anti-Terrorism Bill (passed last year) to crackdown on dissent. Many leftist, human-rights and youth organisations in particular have been harassed and attacked on baseless charges.

A notable example is at the University of the Philippines (UP), which Duterte personally accused as being a recruitment ground for the CPP last November. In early January this year, Defense Secretary Delfin Lorenzana suddenly declared the end of the “UP-DND Accord.” This is a longstanding agreement between the Department of National Defense (DND) and the UP, where the former cannot send in the police or military into any of the UP’s 32 branches around the country "except in cases of hot pursuit and similar occasions of emergency" or when assistance is requested by university officials. A few days later. Duterte personally backed this move.

The UP-DND Accord is a legally binding agreement that was won in response to the uproar against the Filipino military’s abduction and wrongful conviction of a UP student journalist, Donato Continente, for assassinating an American military officer in 1989. Now the military has decided to trample the students’ rights underfoot once again. This decision instantly ignited backlash from the UP student body, who have been staging demonstrations on campus, despite the COVID-19 pandemic restrictions alongside faculties. Hashtags #DefendUP and #StopTheAttacks began to flare up on social media.

However, the regime is prepared to expand their incursion into other campuses. A few days after the UP-DND Accord was torn up, Defense Secretary Lorenzana announced that a similar agreement with the Polytechnic University of the Philippines (PUP) could also be scrapped. The PUP students responded to this suggestion with protests of their own, but they were reportedly harassed by the chapter of Duterte Youth stationed on campus.

Beyond the campuses, various critics and rights activists are also being repressed. Alex Danday, the national chairperson of Anakbayan, which is one of the largest student activist organisations in the country, was menaced in his own home by officials on 21 January. On the same day, indigenous rights activist and chairperson of the Cordillera Peoples Alliance (CPA) Windel Bolinget was forced to submit himself to the authorities after the local police ordered his arrest and authorized “shoot-to-kill” if he resisted.

These incidents continue the slew of repression that has begun last year under the “red-tagging” campaign and the new Anti-Terror legislation. In the name of rooting out the CPP-NPA insurgency, many leftists and social activists were placed on the state’s watch lists and some have even been extrajudicially killed.

This atmosphere of state terror, which was already in place since Duterte came to power and implemented a bloody “war on drugs,” further emboldened the police to deploy violence with impunity. Last December, an off-duty policeman in Tarlac shot a 52-year-old woman and her son in the head over a noise complaint. This act of police brutality was captured on video and spread rapidly on social media, giving rise to uproar against state violence through the hashtag #StopTheKillingsPH. In sum, it is reported that more than 8,000 people have been killed in the war on drugs since Duterte came to power. 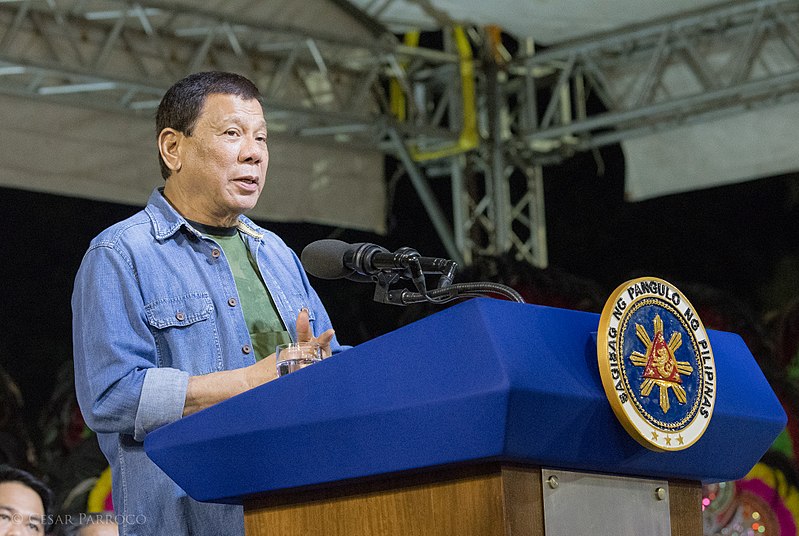 Duterte is ramping up repression as he strives to consolidate his power / Image: Ceslou

Besides hitting out at opposition to his government on the campuses and in the streets, Duterte’s “red-tagging” campaign is also trying to drive opposition out of the Filipino Congress. It was reported that back in November, Duterte complained that communist insurgents were taking advantage of the Philippines’ current party-list electoral system to infiltrate the legislature. He thus urged his supporters in the Filipino Congress to push through widespread constitutional revamps and charter changes, known in the Philippines as “Cha-cha.”

The “Cha-cha'' that Duterte has in mind are far less whimsical than its name implies. He reportedly wishes to scrap the party-list electoral system that the Filipino legislature currently has, which would suppress smaller political parties who won seats on this basis. Further, Duterte wishes to allow foreigners to “own land and hold majority stakes in the sectors of oil and gas exploration, mining, mass media and education”, as a measure to lift the Philippines out of the economic slump set off by the COVID-19 pandemic.

In addition, many see Duterte’s bid for “Cha-cha” as a way to implement his longstanding plan to bestow upon a new federal constitution in the Philippines. He has long claimed that this would empower local governments from the stranglehold of the central state based in Manila, but in reality, this could merely be his Trojan Horse to extend his term limit and empower his cronies in government.

To achieve the “Cha-cha,” Duterte would have to convince his allies in Congress to turn into a constituent assembly that can in turn push through the constitutional changes. While it is not currently a settled matter, Duterte has a significant number of allies to support his efforts in Congress. The elevation of state repression and the “red-tagging” could then be used by Duterte as a means to suppress the opposition inside and outside of congress.

Why is all this happening?

The Duterte regime is centralizing its power through the “red-tagging” campaign in order to push through measures according to Duterte’s will to consolidate the regime’s rule inside the Philippines.

Try as he might, no authoritarian in the world can maintain itself indefinitely and the working-class masses will eventually fight back. The students and youths of the Philippines are already incensed by the recent slew of attacks on their democratic rights.

Some workers’ organisations are also beginning to demand a rise in wages to be able to survive, a call that has been rejected by the Employers’ Confederation of the Philippines. It remains to be seen when a larger struggle against the capitalists will occur, but it is only a matter of time that it does. Sooner or later, class struggle will flare-up in the Philippines on a mass scale, but it would require a genuine Marxist leadership in order to end the suffering of the Filipino masses under their rapacious ruling class and imperialist forces.

No to state repressions! #StopTheAttacks!

For a mass workers’ fightback against Duterte!