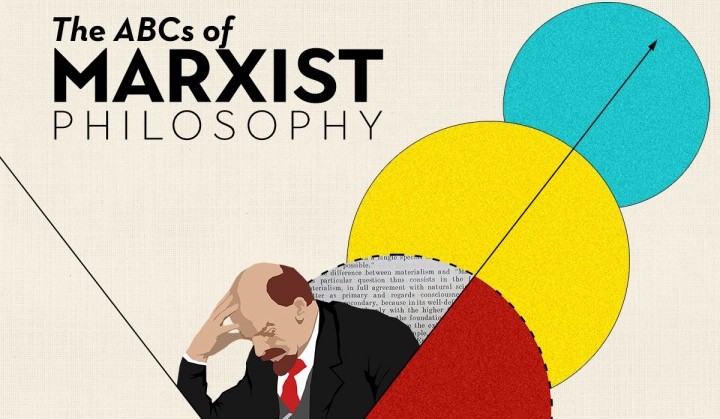 Dialectical materialism is the philosophy of Marxism. It is our method for understanding nature, history and society. This nine-episode podcast series, ‘The ABCs of Marxist philosophy’, will provide listeners with a valuable introduction to the basics of dialectical materialism, explaining all its aspects in a clear and accessible way.

We are living through truly tumultuous times. The world is rocked by economic, health and environmental crises. The future under capitalism is one of ever-increasing misery and horror. The only hope for millions of people today lies in the revolutionary overthrow of capitalist society and the struggle for socialism. But as Lenin once remarked, “without revolutionary theory there can be no revolutionary movement”. In order to change the world, we first have to understand it.

In this nine-part series, Daniel Morley – writer and activist for the British Marxist paper Socialist Appeal – breaks down the philosophy of Marxism into different subjects. Beginning with the distinction between idealist and materialist philosophy, Daniel discusses epistemology, formal logic, the need for a dialectical philosophy and the main component parts of dialectical materialism.

In doing so, Daniel also lays the foundations for dealing with the most essential philosophical questions: where does morality come from? What is human nature, and is there even such a thing? And what comes first, ideas or matter? Referencing quotations from Marx, Engels, Hegel, and others, this series leaves no stone unturned.

Marxist theory is our most important weapon in the class struggle. Far from being a dry, academic pursuit, for Marxists, theory is a guide to action. It is the duty of every revolutionary to carefully study the method of Marxism, the basis of which is the philosophy of dialectical materialism. This series provides a helpful starting point for such study.

For those wanting to learn more about Marxist philosophy, and acquire a Marxist understanding of the history of thought, we recommend checking out Wellred Books, in particular Alan Woods’ latest book, The History of Philosophy: A Marxist Perspective, and the Marxist University section of our website on the subject of dialectical materialism.

Part 1: What is materialism?

There are many ways to categorise a philosophy, but at the most fundamental level, all philosophies fall into one of two camps: idealism and materialism. Marxist philosophy is materialist; that is to say, it believes the material universe is the only universe, and that ideas, mind and consciousness are a product of it.

Part 2: How can we know anything?

The question of idealism versus materialism frequently expresses itself in the question of knowledge. Do we know anything for certain? And if so, how? And why has this question stubbornly persisted throughout the history of philosophy?

Part 3: What is human nature?

The concept of ‘Human nature’ is often used as a cheap rebuttal to the possibility of socialism. But what actually is human nature? Are humans greedy or selfish? Do we have a soul or an essence? Is there an ideal way that we should aspire to live? And how does this relate to the question of knowledge and thought?

Logic is usually seen as a dry, boring discipline, suitable only for pedants. This is because it is traditionally presented as having no relation to the real world of objects, and is instead a self-contained system describing rules of thought.

Marxism completely rejects this formalism and seeks to find the basis for our logic in this real world – a world full of dynamism and development; change and contradictions.

Marxist logic is dialectical, not formal. That means that our starting point is change and contradiction. But when we look at nature and society, we see that periods of change are interspersed with periods of apparent stasis. How can we make sense of this, and understand the phenomena we encounter in the world around us?

If we want to understand how things change, we must understand things as self-moving, rather than seeing all change as a result of external forces. But where does the movement of matter come from? How and why does development take place in nature?

Thought is inherently about generalisation and universals. It takes us beyond the immediacy of the here and now, linking things and their characteristics together to develop useful categories.

This contradiction – between part and whole; individual and type – is at the heart of philosophy’s deepest problems. The need to grasp reality as a complex whole, instead of as atomised, self-contained parts, is likewise one of the deepest problems for science.

Is there such a thing as good and evil? If so, who decides, and why? Why is there so much suffering and cruelty in our society? And, most importantly, how can we end this?