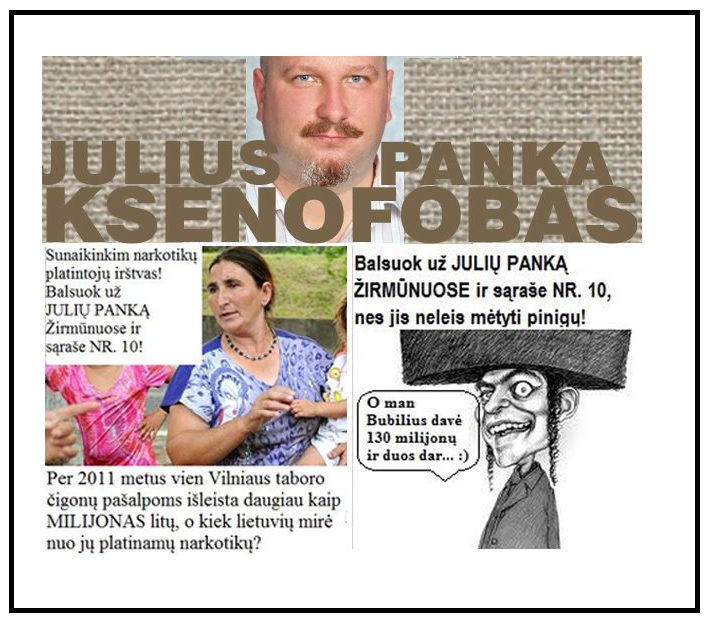 We are publishing this letter from Vilnius, the capital of Lithuania, as it gives an interesting insight into how degenerate the bourgeois parties that dominate the political scene there have become, with rabid racist propaganda accepted as a legitimate way of winning votes.

In October the citizens of Lithuania will vote for a new parliament. One might say that this year’s election campaign was one of the freest in the past ten years: parliamentary and non-parliamentary parties gained access to debate on television and radio; even the unpopular opposition Stalinist party of the Socialist People’s Front got its air-time. However, that changes little: public discussions reminded one more of a market buzz. Almost all the parties are still politically on the right, and the one exception, the Socialist People’s Front, has nothing to offer but abstract slogans. Basically, we are choosing between the liberals and the far-right.

The Lithuanian Left is weak. The Stalinist party was created in 2008 and in the beginning seemed promising. However, its refusal to criticise the crimes of Stalinism rapidly undermined its support. In 2008 they failed to win any seats in parliament. In addition, they have expelled many people with critical views and now they have just 1039 members. All the polls show that they won't get over the 5% barrier this year which is the minimum to get any seats in parliament.

There is also the Social Democratic Party, which arose from the Communist Party of Lithuania. In general their political line is social liberalism. In the past their slogan was: '”both the wolf fed and the sheep alive” [a Lithuanian proverb; the English equivalent would be “have your cake and eat it”). That is to say, they wish to combine the interests of business and the working class. That sums up their ideology.

Together with the Conservative Party, they have been in charge of our country for 20 years. And even though they led the government in 1990-1998, 2004-2008, they never even proposed such standard Social Democratic measures as progressive taxation.

But in this year’s election we have yet another novelty. Parties have begun to use more ‘radical’ methods of agitation. And if some of them one could just laugh off, others give grounds for concern. This is what I saw at the bus stop near the City Hall of our capital, Vilnius: 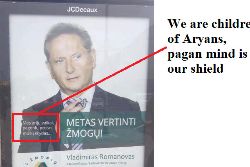 A well-known bourgeois, the multimillionaire V. Romanov, appeals to our ‘Arian heritage’ in order to gain votes for his newly established Lithuanian People's Party. However, this is nothing compared to what is happening on the Internet. For instance, one of the notorious neo-Nazis, J. Panka, who claims to be just a patriot, offers the following racist promises on behalf of his party (the “For Lithuania In Lithuania” Tendency):

If you vote for J. Panka, he will “sort out” the Romany people’s encampments and the social welfare which we spend on them. Also, he promises that the man with peyos (i.e. a Jew) won’t take money from us. His companion R. Čekutis, who happens to be a teacher at one of the Lithuanian universities, chose to participate in the elections under the symbolic number of 88, the symbol that stands for “Heil Hitler”.

The parliamentary party Order and Justice, which has representatives in the European Parliament, chose a more cautious, yet drastic, way of sending a message. Their official slogan is “for the Third Republic”. One could speculate on their beliefs and symbolism, but I think it is hard to ignore the allusion.

What is meant by the “Third Republic” slogan? The “first” independent Republic of Lithuania existed from 1918 to 1940 (until the “Soviet occupation”). The second Republic, according to them, lasted from the restoration of independence (1990) to the present. And now they intend to create a third, “new”, independent and strong state.

Together with their symbol (see above), this line of agitation reminds one of Hitler's idea of the “Third Reich” [“Reich” in German means wealth, realm or just country, as in “Österreich”, the Reich of the East, or “Austria”]. Like Hitler, they promise to restore dignity to the Lithuanian people and the state of Lithuania. Obviously, they are not National-Socialists, but they want to use these historical parallels to gain votes.

Against this background, although the ruling conservative party seems to be very moderate, it ridicules homosexuals, communists and Russians. On their official web site they invite you to complete a test with some basic questions:

I think all these pictures are more eloquent than dozens of words. Keeping in mind that a few weeks ago, on 11th September an assault was made on a synagogue in Pakruojis town, during which a swastika was daubed on the wall, this kind of agitation may appeal to some voters.

Others can just silently hope that one day this insanity will end.