Details
In Defence of Marxism
09 December 2014 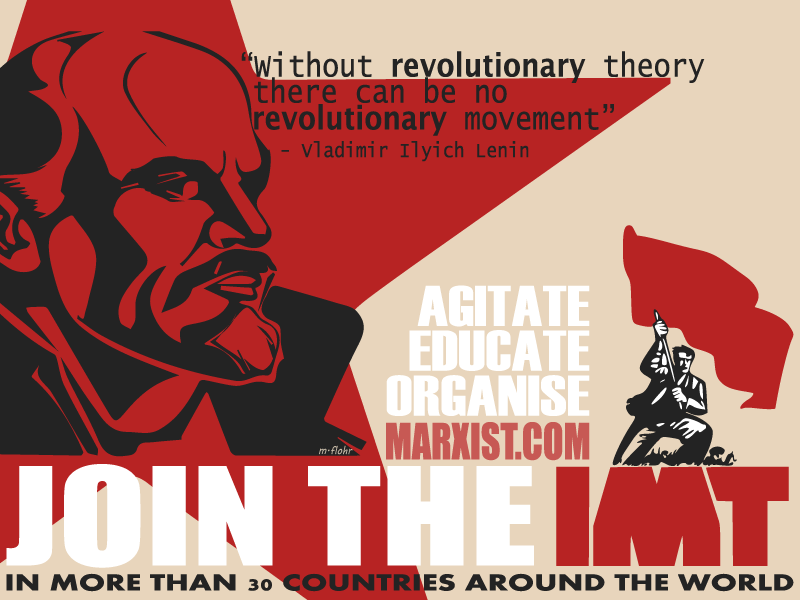 A reading guide to the fundamental ideas of Marxism.

The crisis of capitalism today is leading more and more people to question the society that we live in. There is a widespread sense that something is fundamentally wrong in the world and that it must be changed fundamentally. According to the ruling class and reformists the events taking place today are merely the result of a series of unfortunate accidents and all that is needed is for everyone to act “rationally”. But this does not explain anything and it solves even less.

Marxism is the science of the underlying laws which govern nature and society. It is only by studying these laws that we not only achieve the best understanding of society, but also discover the role and tasks of revolutionaries.

Marxist theory is the basis upon which our analysis, perspectives, programme, and participation in the movement are based. It is our "guide to action." This is why the International Marxist Tendency places so much emphasis on political education. To this end, we will be publishing a number of reading guides on a variety of different subjects. The present one, which is the first in our series, deals with the basic fundamentals of Marxism. This guide is not necessarily intended to be read from one end to the other, but if you are completely new to the ideas of Marxism, we do recommend you start by reading the texts under the heading The ABCs of Marxism.

This reading guide is far from exhaustive, but it provides a solid basis for those wishing to equip themselves with the necessary ideas for the daily work of building the forces of Marxism. We would like to encourage all our supporters and those interested in learning more about Marxism to read (or re-read!) through the works on this list. We also encourage you to form a reading group, to engage other people and improve your understanding.

Many of these are short books or pamphlets; some are more lengthy books; and others are just short articles. All of them are available to be read online for free (links are provided), and many of them have already been published by Wellred and are available at www.wellredbooks.net

The ABCs of Marxism

The Ideas of Karl Marx, by Alan Woods

- A modern introduction to the basic elements of Marxism and why socialism is the only way forward for humanity.

The Communist Manifesto, by Karl Marx and Friedrich Engels

- The founding document of the Communist movement, more relevant today than when it was first written over 160 years ago, predicting such phenomena as globalisation, economic crisis and inequality.

What is Dialectical Materialism, by Rob Sewell

- Introduction to the basic concepts of Marxist Philosophy

The ABC of Materialist Dialectics, by Leon Trotsky

What is historical materialism?, by Alan Woods

- A comprehensiev introduction to Historical Materialism.

Civilization, Barbarism and the Marxist view of History, by Alan Woods

- For Marxists, history is not a series of unrelated events. This article shows the superiority of the Marxist method in understanding the history of civilisation. Only by fully understanding the past can we correctly analyse the present and act to change the future course of human development.

Origin of the Family: In Defence of Engels and Morgan, by Rob Sewell

- How did the early primitive communist societies lead to the eventual rise of class society? What is the state and where did it come from? Rob Sewell gives an overview and a modern defence of Engels’s classic book Origins of the Family, Private Property and the State.

- In this short booklet, Marx explains in everyday language how labour creates value, how capital exploits labour, and how wages are determined in capitalism. An excellent introduction to Marxist economics.

- In this work, Marx explains how prices relate to a commodity's value and shows where profits actually come from. Another great introduction to Marxist economics.

What Causes Capitalist Crises: Under-Consumption or Overproduction? by Rob Sewell

- an introduction to the Marxist theory of crisis, and how it is being verified by current events.

Marxism and the State

On Marxism and the state, Phil Mitchinson

- A brief introduction to the Marxist view of the state.

State and Revolution, by V.I. Lenin

- In this Classic text by Lenin, he analyses the origins and the role of the state and also outlines the main principles of a future workers’ state which would replace it. By doing so, Lenin also takes up the views of the anarchists and the reformists on this question, and exposes their limitations.

Stalinism and Bolshevism, by Leon Trotsky

- In this article Trotsky explains the fundamental differences between Marxism and the caricatured version which was put forward by the Stalinist bureaucracy which had usurped political power in the Soviet Union.

The Class, the Party and the Leadership

The Class, the Party and the Leadership, by Leon Trotsky

- In this pamphlet (which was never finished due to Trotsky’s assassination), Leon Trotsky explains the role of the revolutionary party and shows that contrary to the reformists’ claim of the “low level of consciousness” of the masses it is the reformist leaders themselves who are the biggest obstacle to the revolution.

150 years since the First International was founded, by Alan Woods

- The working class needs a revolutionary International -  In this article Alan Woods outlines the history of the working class movement and the tasks facing Marxists today.

The Transitional Program,  by Leon Trotsky

- How do Marxists use programmatic demands to win the working class to the cause of revolutionary socialism? Trotsky explains the need to use transitional demands to bridge the gap between the present consciousness of the working class and the need for the socialist transformation of society.