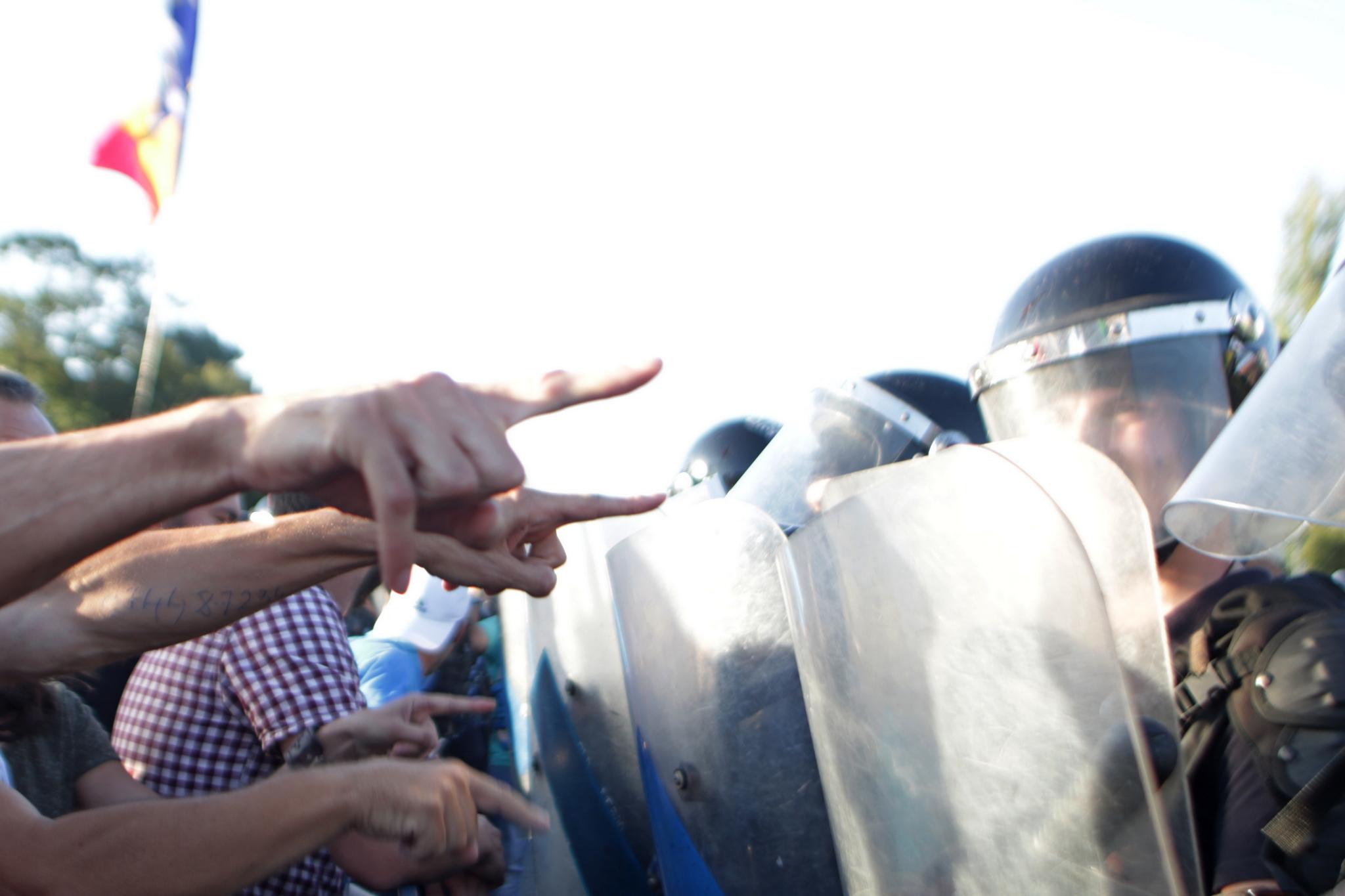 On Friday 10 August the long-awaited ‘Diaspora at Home’ rally took place, with up to 100,000 protesters gathering in front of Victoria Palace alone. The rally itself had been organised on social media for a few months by the Romanian diaspora living abroad.

Demonstrators were travelling from all over Europe, Canada and the United States to Romania to protest against the government. They were joined by tens of thousands in Bucharest and in many other towns, including Sibiu (over 8,000), Cluj-Napoca (10,000), Iași (9,000), with smaller demonstrations in Timișoara, Baia Mare, Constanța, Galați, Bistrița, Oradea, Târgu Mureș, and Satu Mare.

These protests have resulted in some of the most violent confrontations to have occurred since the collapse of the economy in 2008. Police repression resulted in more than 450 protesters and 30 police officers being injured. The violent intervention of 1,000 police officers in riot gear to disperse the demonstration in Bucharest has caused a major backlash against the government and the Gendarmerie (the Romanian military police), leading to the sacking of its head, Sebastian Cucoș. He was replaced by Colonel Ionuț Cătălin Sindile on 15 August.

On 11 August, more than 50,000 people returned to Victory Square in Bucharest defying the threat of repression,  joined by demonstrations in other major cities.

There is a lot of anger amongst the diaspora. More than 4 million Romanians have had to leave the country over the past 15 years in search of better conditions. Current unemployment levels are extremely low, but this is largely due to the continuous number of workers emigrating. Contrary to what would be expected, the low unemployment has had no positive impact on wage levels, which have remained extremely low. The labour law counter reforms of the past decade have made it more difficult for workers to organise and strike, thus compressing wages. The current average wage of about 500 euros is much lower than in other EU countries. Furthermore, 40% of the workforce are being paid the bare minimum wage (the equivalent of 240 euros), or even less. This represents the potential basis for a future explosion of the class struggle in Romania.

A study by Adina Nica in August 2017, which surveyed 1,192 Romanians living abroad, shows that over 40% of those who emigrated did so for financial reasons. Moreover, around 70% of these say that they send money back home. Remittances represented almost 2% of Romania’s GDP in 2016, mainly coming from Italy, Spain and Germany.

As in previous protests in January-February 2017 and 20 January 2018, the focus was on the question of corruption. This time, however, the main demand was the resignation of the Social Democratic Party (PSD) government, due to its attempt to modify the penal code, which would have relaxed the penalties for some corruption offences. This is particularly galling given the fact that the leader of the PSD, Liviu Dragnea, is head of the Chamber of Deputies despite previously being convicted of corruption himself.

Divisions in the ruling elite

Romanian President Klaus Iohannis stated that he condemned “firmly the acts of violence, regardless of who committed them or who they were directed against. Under no circumstances can it be justified to hit another person with brutality, and those found guilty of such acts must be punished severely. Over the years, Romanians have demonstrated their civic feelings and protested peacefully in support of democracy and the rule of law.”

Despite distancing himself from the violence, former prime minister Dacian Cioloș criticised Iohannis. According to Cioloș, Iohannis should have acted as a mediator between the government and the protesters in order to fulfil his role as president.

On the other hand, PSD leader Liviu Dragnea attacked Iohannis for criticising the Gendarmerie, claiming that they were maintaining order and abiding by the law. He also added:

“The declaration of President Iohannis is practically undermining the authority of the state and invites the repetition of violence at the protest announced for next Saturday; this, with the obvious purpose of overthrowing the present government and replacing it with ‘his government’, as he had already done once in this term.”

However, these fights between rival cliques within the ruling elite are just a smokescreen to hide the fact that neither the government nor the opposition have any solution to offer to the legitimate discontent of the demonstrators. This discontent is also shared by a larger part of the population, though they have remained passive to date.

According to opinion polls, the overwhelming majority of expatriates say that the main reason for emigrating is related to corruption in the political arena. This reflects the current level of the anti-corruption movement.  The dominant idea at the moment is ‘if we were to have less corruption, better people in government and more justice, then everything will be better’. It is this approach which leads to the initiative ‘no criminals in public functions’, a demand to bar all those with a criminal record from working in government or parliament.

Such ideas understandably stem from anti-government moods, which are widespread. However, as well as chanting ‘down with the government!’, there were also chants that targeted the PSD specifically, such as calling them ‘the red plague’. In the demonstrations, some were waving Romanian flags together with EU, US, German, French, Italian, and Spanish flags. Despite the general idea that opposing corruption is ‘politically neutral’, neither left or right wing, the movement is imbued with illusions that a more liberal model of capitalism would represent a solution to the dead end reached by the system in Romania.

There is no doubt that Dragnea and the whole PSD establishment are corrupt. But the real problem is embodied in the policies carried out by this and all the previous governments in Romania, designed to protect the interests of an oligarchy of capitalists and their international patrons. This class of local profiteers, in close collaboration with their European capitalist partners, have looted the country and made themselves rich from the wholesale privatisation of Romania’s assets after the collapse of the Ceaușescu regime. The persistent compression of wage levels and living standards of the Romanian working class to levels much below the European average is also revealing that joining the EU was beneficial mostly for the richest layer.

Corruption, to one degree or another, is a constituent part of capitalism. Scandals are also plaguing the governments and the ruling elites of all the countries which are presented as a model to be followed. Furthermore, what is the alternative that is presented? The opposition, including Iohannis and the PNL, quite clearly does not offer a genuine alternative for improving the conditions of the vast majority of Romanian people. In fact, they are just as responsible for this situation as the PSD, if not more. Their government record is not dissimilar. What they have been doing all along is favouring their own clique of capitalist friends and foreign capitalists by enforcing a sharp programme of privatisations and austerity measures.

Following the crisis of 2008, which badly affected the Romanian economy, the terms of the 2009 bailout by the EU, IMF and World Bank dictated a series of austerity measures. This was primarily aimed at deregulating the labour market, which the governments of the time willingly rolled through. The drive to create the ‘best environment’ for foreign investment meant, in practice, that all of the country’s best assets were sold off to foreign capital and the Romanian workers have become a reserve of cheap labour, mainly to the benefit of the Romanian and EU capitalists.

As Prime Minister, Emil Boc, former adversary of the PSD, introduced a counter reform of the Labour Law which scrapped collective bargaining altogether in 2011. This was followed by the introduction of the so-called Social Dialogue Act, which seriously undermined trade union rights. Eugen Teodorovici, who is opposing Dragnea while being a PSD member himself, proposes to push privatisation even further and abolish the minimum wage. There are countless further examples, which clearly demonstrate which ‘possible alternative’ is being offered by the opposition to the permanent crisis of the current system: more of the same!

What is really at stake?

Dragnea may be right about one point, though. Iohannis is probably aiming at installing ‘his own government’. The current struggle reveals the division opening between different layers of the capitalist class. The opposition’s rhetoric against corruption is merely a smokescreen to avoid dealing with the real problems of poverty, low wages and lack of rights for Romanian workers. They are trying to use the growing discontent to their advantage but, once back in power, they would continue with their agenda of austerity and counter reforms.

Both sides are trying to mobilise mass support but, so far, the working class is still mostly passive. The PSD and PNL are pushing the Romanian masses to take sides for one camp or the other in order to prevent the Romanian workers from developing demands based on their class interests and mobilising independently - a perspective that scares both the government and the opposition.

None of these parties represent the working class, nor do they have any interest in supporting the rights of the working class as a whole, quite the opposite. It is undeniable that corruption must be fought against and should be eradicated. However, corruption is an inherent part of capitalism. It is impossible to remove it without overthrowing the capitalist system altogether. A bourgeois regime, regardless of the level of corruption, will always act in favour of the ruling class over the working class, as long as the rule of the capitalists is guaranteed.

The only way out is to build a genuine working-class movement, with a leadership committed to defending the interests of the working class, countering austerity and privatisation and not afraid of threatening the rule of the capitalists. This should be a movement committed to the re-nationalisation of all that has been privatised.

Real capitalism has failed the Romanian people and only produced systemic corruption and the selling off of the most valuable assets in the economy to the advantage of the rich. The only serious measure against corruption is establishing a workers’ democracy free from the rule of the markets, capitalists and oligarchs!