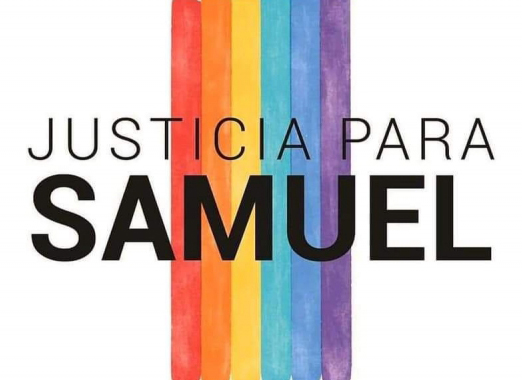 Yesterday we learned of the horrific murder of Samuel, a 24-year-old man, who was beaten to death while out at night with friends. According to an account provided by two of Samuel’s friends to the newspaper El Mundo, a mix-up with a mobile phone served as a pretext for the attack. A young man threatened Samuel saying, “Stop filming or I'll kill you, faggot,” before launching an attack against him. The aggressor left briefly before returning a few minutes later accompanied by 12 people, one of whom shouted, “you fucking faggot,” and continuing to beat Samuel, ending in his death in the early hours of 3 July. The investigation, however, is still open, and the case is under secret investigation.

Once again, we are faced with a murder, in this case, a homophobic one, which has filled every corner of Spain with rage. Less than a month ago, every region of Spain was filled with angry protestors, repulsed by the significant rise in gender-based murders in the months of May and June.

For the last two years, expressions of hatred towards the LGBT community, women, and immigrants have been clearly amplified, notably with the presence of the far-right Vox party both in government institutions and in the media. Following their breakthrough into the Andalusian Parliament, Vox was quick to make a statement on the so-called “Pin Parental” – with their intention being to give parents the right to veto certain educational activities. Specifically, they placed emphasis on those trying to raise awareness among students about the scourge of male violence, and the promotion of education about equality, and making sexual diversity visible. Their sole objective was that of perpetuating the model of the patriarchal family, thus excluding those who do not fit into it.

The increase in homophobic, sexist and racist attacks in recent years are undoubtedly linked to this, as are the growing attacks on left-wing activists. The far right feels strengthened and emboldened by having its political representatives on television, reinforcing their hate speech, whilst the political leaders of the left do little more than lament the violence, without setting out a plan of action to combat it on the streets. In addition to this presence in the media, a huge amount of resources are being partly channeled into encouraging and materially supporting the presence of reactionary street groups.

But physical attacks are only the tip of the iceberg. Beneath the surface, there is a hidden reality. According to the Spanish Observatory Against Homophobia and Transphobia, the intense social pressure suffered by the LGBT community means that “suicide attempts among LGBT youth are three to five times more numerous than among young people in general”. Today, despite the fact that sexual diversity is widely accepted by society, only 38 percent of LGBT people dare to state openly at work that they are part of the community, due to the prejudices that still prevail in society. This is not to mention the enormous difficulties that transgender people still face in accessing the job market, which places them in situations of greater risk of social exclusion, in many cases forcing them – and particularly transgender women – into prostitution.

Enough is enough! We must stop the homophobic aggression of the far right. We call upon everyone to attend the rallies that have been spontaneously called in many cities all over Spain to show our repudiation of this latest atrocity. We must not allow any more assaults. The LGBT community, women and immigrants, as well as the entire working class, must give a bold response in the streets to every reactionary act.

It is essential that we take up this fight. Despite all the obstacles that they have faced, the LGBT community has made important steps forward in the fight for their basic rights, such as are contained in the latest legislation proposed by PSOE [the Socialist Party] and UP [Unidos Podemos]. However, there is still a long way to go for LGBT people to achieve full rights, something that will only be possible through the struggle for a socialist transformation of society, which alone will allow us to be fully free.