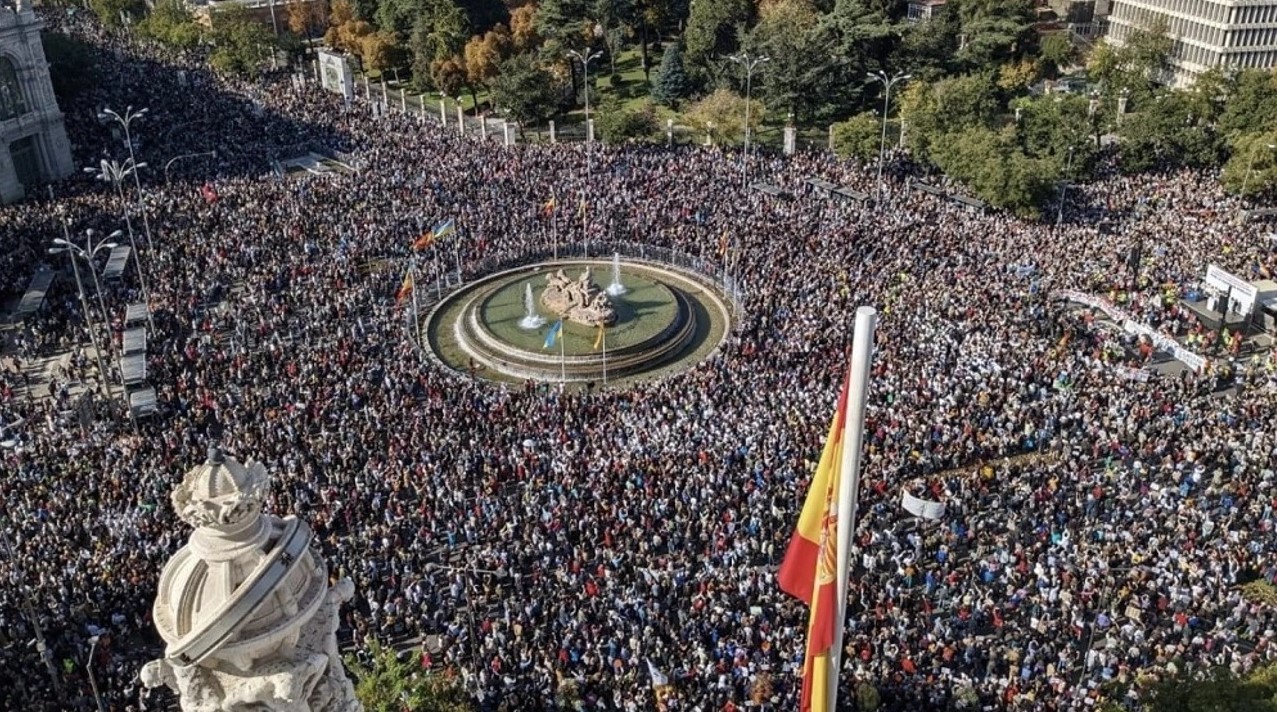 On Sunday 13 November, hundreds of thousands of people flooded the streets of Madrid against the criminal health policy of Isabel Díaz Ayuso's right-wing Community of Madrid Government, and in defence of public health. Ayuso, whose colossal arrogance is equivalent to her ignorance and idiocy, is beginning to see her popular support undermined, even among the middle-class elements that formerly supported her. What is needed is a final push to bring her down.

Read the original in Spanish |

The authorities put the attendance at 200,000 people, and the organisers at 650,000. The latter figure is closer to reality.

The demonstration was called by the neighbourhood associations of Madrid and of the main towns in the Autonomous Community, and was supported by the main health professional associations and workers' unions, as well as the left-wing parties. The left-wing atmosphere that pervaded the demonstration was undeniable. The cries of ¡Sanidad Pública! (“public health”) were joined by those of ¡Ayuso dimisión! (“Ayuso resign”).

Comrades of the International Marxist Tendency took an active part in the huge demonstration, which saw four columns combine after they simultaneously left the squares of Nuevos Ministerios (North) and Ópera (West), Hospital la Princesa (East), in the geographical heart of Madrid’s right wing, and finally in Atocha, which saw the largest contingent, coming from the proletarian neighbourhoods of the south of Madrid and the red belt of the Autonomous Community.

In reality, the demonstration stretched continuously over the nearly two kilometres that separate Atocha from the Plaza de Cibeles, where the columns converged, with the head and tail of the demonstration remaining immobile.

Madrid thus relived the magnificent days of mass struggle of the Mareas, the Marches of Dignity and the general strikes that erupted between 2012 and 2014, or more recently the tremendous mobilisations of women and pensioners in 2018 and 2019, before the pandemic. The working-class struggle traditions of Madrid rose up again, showing their strength to the right and exhibiting the real balance of forces in society, which massively favour the working class and the left whenever they mobilise decisively. This mobilisation, which we would estimate at around half a million people, is something the right-wing forces in Madrid have never been able to match, not even remotely.

The reasons for the mobilisation and popular discontent concern the local government’s efforts to dismantle public healthcare, and more recently primary care and emergency services in neighbourhood health centres. Madrid, with all its wealth, has the lowest health spending per inhabitant in the whole of the Spanish State, at 1,171 euros per inhabitant, compared to the average of 1,478 euros. It also ranks second-last in terms of the number of family doctors per 1,000 inhabitants (0.7), only ahead of the Balearic Islands. And it is the only community where there has been a reduction in the number of primary care doctors, by 2 percent, since 2018. 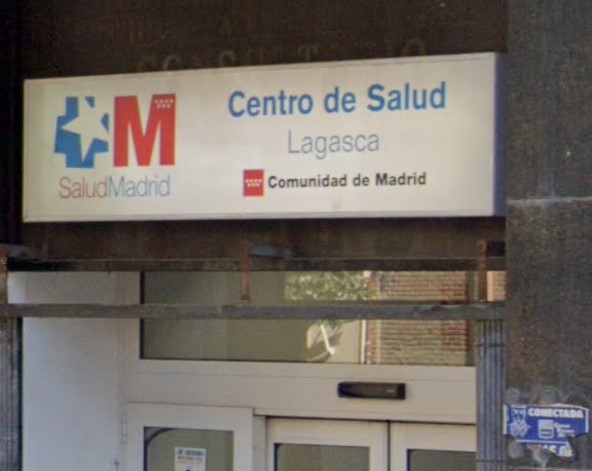 Madrid, with all its wealth, has the lowest health spending per inhabitant in the whole of the Spanish State Image Google

The lack of doctors means those that exist are overburdened with patients they cannot attend to properly, leading to anxiety and exhaustion for thousands of professionals, an increasing number of whom are fleeing abroad or to other autonomous communities. In addition to the usual delays in appointments with specialists of four, six, or even eight months, it is now normal to only get an appointment with the general practitioner up to a month after requesting it! Of course, this is not the same in all neighbourhoods. A recent newspaper report reveals that it takes an average of two days to get a GP appointment in a rich neighbourhood and 20 days in a working-class neighbourhood.

The health centres in the bourgeois neighbourhoods are very well supplied with professionals, and cuts are concentrated in the working-class and marginalised neighbourhoods.

In addition to the business of diverting billions of euros of public money a year to private clinics and laboratories, the increasing deterioration of Madrid's public health system leads many desperate people to take out private health insurance, which already covers nearly 40 percent of the population of Madrid, according to the IDIS Foundation, the private medicine lobby in Spain.

Combined with the disaster in primary care, there is the even-greater disaster in the emergency rooms of the health centres, which have reopened after two years of closure due to the pandemic, with half the staff, who have to be spread throughout the community just to keep the centres open. Numerous medical shifts are being carried out without doctors, and now the Ayuso government is proposing to resolve this with telephone consultations. This resulted in an indefinite strike of the emergency medical staff, which is still going on. And in a week's time, on 21 November, the strike of primary care, family doctors, will begin.

Now is therefore the time to strike hard and not, as some political representatives of the official left have foolishly proclaimed, in their usual short-sightedness and distrust of social mobilisation, to wait until 2023 to oust Ayuso in the regional elections in May. Ayuso's health policy, as well as her general reactionary policy, must be fought and defeated now. The working-class families cannot and will not want to wait 6 months. 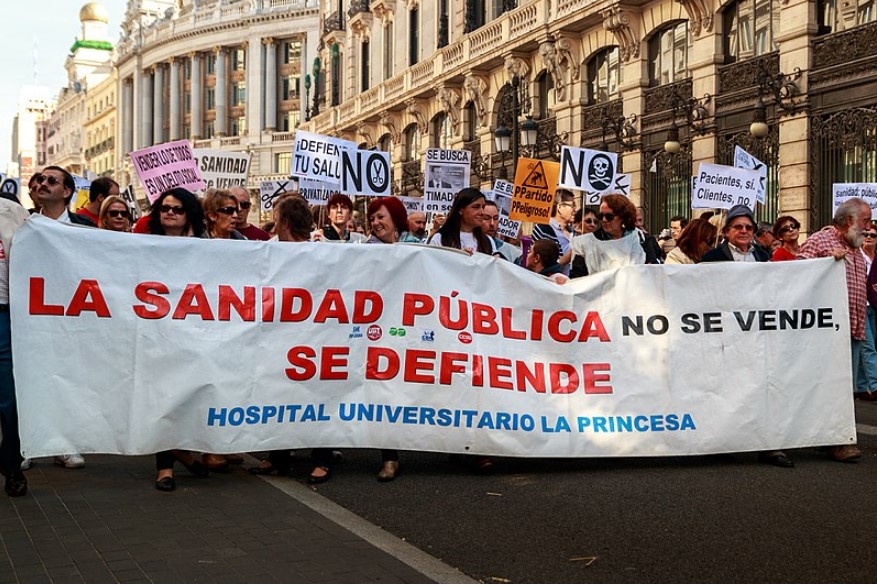 It is now time to launch a 24-hour general strike in the Community of Madrid / Image: Barcex, Wikimedia Commons

Notably, a sector of the middle-class and more backward working-class layers that gave Ayuso their support just over a year and a half ago, in the 2021 elections, are beginning to turn their backs on her. Let's not forget that the medical profession - a relatively well-off and conservative layer - as well as a good part of health professionals, are a traditional base of the right, and are now leading the most important fight that Díaz Ayuso has suffered in her three-and-a-half years in office.

The willingness of the working-class families to fight and mobilise was very clear yesterday, the shift of an increasing number of middle-class sectors to oppose Ayuso is also evident. Not even the far-right Vox, which has been absolutely mute during this conflict as Ayuso's main parliamentary supporter, can capitalise on the social discontent for itself. It is now time for all the trade unions, neighbourhood associations, social movements, as well as the left parties and their activists, to join forces to broaden their demands beyond the health issue: in social care, education, urban planning, housing, etc. and to launch a first 24-hour general strike in the Community of Madrid, with mass mobilisations in all neighbourhoods and cities.

This will be the best way to corner Ayuso and her government, wring concessions out of her, and to further undermine her social support base. A determined struggle and social mobilisation is the best way to accelerate the fall and collapse of the right wing in Madrid, not electoral calculations.

It is time to hit the streets! All out together!