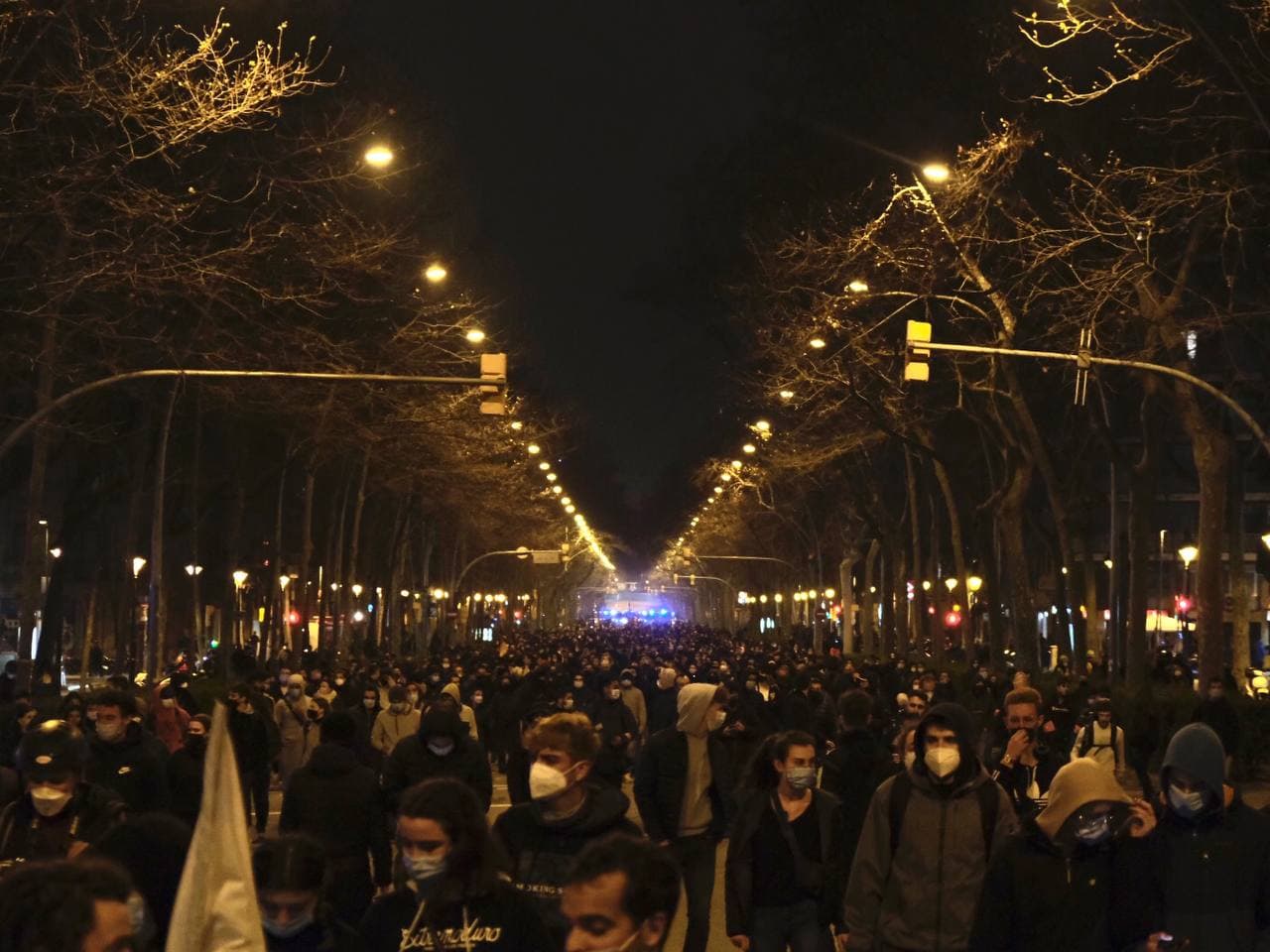 For a whole week, demonstrations have taken place across Catalonia and Spain in protest at the jailing of Communist rapper Pablo Hasél, who was arrested on Tuesday 16 February in Lleida for political opinions expressed in his lyrics and tweets. His jailing has unleashed a groundswell of anger, particularly amongst young people, who have met vicious repression at the hands of the state.

While on the evening of his arrest, and the day after, the demonstrations and rallies took place mainly in Catalonia and Valencia, on 17-18 February, they began to spread across the Spanish state, with demonstrations in Madrid, Guadalajara, Zaragoza, Burgos, Granada, Sevilla and many others. In many of the towns and cities in Catalonia that had already seen protests, people went out on the streets again.

In Barcelona, a woman was hit by a foam projectile and later lost her eye in hospital. Foam projectiles are used by riot police in Catalonia as a replacement for rubber bullets and have already caused several cases of serious injury. They are not supposed to be fired at the upper part of the body, but in this case they clearly were.

In Madrid, several thousand gathered at Sol square in the city centre.

The police proceeded to blockade all exits and used batons and shields to prevent the protesters from marching.

The police prevented protest against jailing of Communist rapper Pablo Hasél from leaving Sol Sq in Madrid and then charged against those inside #LibertadPabloHasel pic.twitter.com/qPDl6fEfkF

Again, repression was brutal, with police officers using terms of abuse against young women, and beating up peacefully protesting teenagers.

In Valencia, after two nights of brutal police repression, hundreds came out to protest again, including some left–wing MPs from the regional parliament. As the demonstration started, without warning or any provocation, the riot police charged head on, leaving one young person with a fractured skull.

In Lleida, one of the demonstrations went to the Ponent jail where Hasél is being kept. Prisoners shouted slogans back through the windows: "freedom of expression", "the rich never come in, the poor never come out [of jail]".

The aim of the repression is clear: to establish clearly that demonstrations against the jailing of Pablo Hasél will not be allowed. The state forces are afraid that, if protests are allowed to go ahead, they will grow in size. At the same time, they want to project an image of violence, which will allow the media and the politicians to paint the protesters as "extremists" and "violent thugs", thus discrediting the cause of defending freedom of expression and diverting attention from the main issue.

In Barcelona, large numbers of youths have clashed with the police every night since Hasél’s arrest. They are very angry at police repression and frustrated at the fact that none of the political parties are doing anything to address this or other issues. On 19 February, the Catalan Students Union SEPC called for a student strike and demonstrations. One of the participants said: "those who raise a hue and cry over rioting should concentrate on offering dignity and a decent future to the youth and the working class".

The rage is not just about the jailing of Hasél, which has acted as the trigger for this movement. It is also about the fact that the right and the far-right are allowed to demonstrate without fear of police repression, but riot police are deployed every time the anti-fascist youth come out on the streets. Left-wing demonstrations in defence of the national health service against cuts are banned, while Neo-Nazis are allowed to commemorate the División Azul of Spanish volunteers, which fought with the Nazis in WWII.

While the movement shows no sign of stopping, so far it is limited to the youth. Unless it spreads to wider layers, it will reach a dead end. The civic organisations, trade unions, CDRs, left-wing political parties and others, should call for mass demonstrations at the weekend in order to escalate the movement.

Unfortunately, so far, they have done no such thing. Unidas Podemos is tied hand and foot to the PSOE government. In fact, the whole situation has been an embarrassment for UP (IU-PODEMOS). They are part of the government, which is partly responsible for his jailing and for the brutal police repression against demonstrators. They have made public statements to reject the jailing of Hasél and moved a motion in parliament for the government to pardon him (which is unlikely to be passed), but have fallen short of actually calling for protests against his jailing, and to apply pressure to the PSOE.

Protests continue over the weekend

Between Friday and Sunday, (19-21 February), we saw the continuation of the protests across the Spanish state. The movement is uneven, with the epicentre being in Catalonia, where Hasél is from and where the impact of the 1 October 2017 referendum is still felt. The experience of police repression here affects a much larger section of the population, who were involved in an insurrectionary movement at the time. Large layers of the youth cut their teeth in clashes with the police at the end of 2019, when leading members of the pro-independence movement were sentenced to prison terms.

Saturday saw over 110 protest rallies in towns and cities across Spain. In Malaga for instance, thousands marched at lunchtime through the city centre.

5th day of protests across Spain against the jailing of Communist rapper Pablo Hasél, sentenced for his political views. #LibertadPabloHasel Málaga pic.twitter.com/blU4h36I4a

In Barcelona, the demonstration was sizable, perhaps 10,000 strong, with columns from different neighbourhoods converging in the centre of town.

There were thousands today in Barcelona to protest the jailing of Communist rapper Pablo Hasél. The media will only show the rioting. Share widely. #LlibertatPabloHasél (video @Fotomovimiento)pic.twitter.com/H1tEFn9ols

As the protest started to move, it was blocked by riot police and pushed towards the narrower streets of Gracia. There, the police completely blocked the protesters, leaving them no exit route, and then proceeded to charge against them in brutal fashion. The aim was clearly not to "maintain order", nor to "prevent rioting", but to teach the demonstrators a lesson.

Full sequence of police charges against #LlibertatPabloHasel protesters in Barcelona. Riot police hems them in from all sides and then beats them up. pic.twitter.com/5rlPWAyHe0

The demonstration in Madrid was much smaller than during the week, with only a few hundred in attendance, as compared to the thousands that filled Sol square the previous Wednesday. Clearly the impact of the brutal police repression on that day had limited the numbers prepared to come out.

Even after the brutal police charges in Barcelona on Saturday, thousands gathered again on Sunday at Estació de Sants and marched to the city centre, where there were again clashes with the police.

The bourgeois media and politicians, from the ruling PSOE to the far right, have launched a concerted campaign to demonise the protests, using clashes with the police and destruction of property to brand them as "anarchists", "violent extremists", etc. Additionally, they have launched a campaign to discredit Pablo Hasél ("he comes from a well-off family", "as a child he was violent", etc).

This shows they are worried about the movement, specifically the way in which it has discredited the Spanish democracy of the 1978 regime, and how it reflects a deeper malaise amongst the youth.

In a cynical fashion, the ruling PSOE, the right-wing, and the media have also used rioting as a stick to beat Podemos and United Left with, even though neither of these organisations has actually called the protests nor called on their supporters to participate.

The right-wing and sections of the PSOE would like to see UP removed from the government, but the problem for Prime Minister Pedro Sánchez is that his government is already very fragile, relying on outside parliamentary support. Removing UP too early would leave him very exposed.

Without a clear leadership or perspective, this explosion of rage is likely to pass, but regardless of this it is extremely important from a symptomatic point of view. In Catalonia and throughout the Spanish state, as in many other countries, there is a lot of accumulated anger at the mishandling of the pandemic, at capitalism's obvious failures to deal with a health emergency, the growing inequality and polarisation of wealth, the lack of any prospect of a decent future for the youth, police brutality, the treatment of immigrants, the rise of the far right and the impotence of the official parties of the left.

There is also a generation entering the scene that became aware of what was happening at the time of the 2008 crisis. They have never experienced capitalism in anything other than a state of crisis, and now they are being dragged into yet another damaging recession. They have little to lose. They have been at the forefront of the barricades in Ecuador, Chile and Spain in 2019; in the #BLM movement in the US in the summer of 2020, and now again in Spain.

A whole section of this generation is being attracted to revolutionary ideas and dragging behind other layers of society, who are either joining in actively or at least expressing sympathy. They deserve a proper revolutionary leadership, and many among them will be part of it. Building such a leadership is the most important task of the day.

So far, the movement has been mainly led by the youth, and while those participating are very angry, there is a limit to how far they can go without a clear perspective. It is therefore to be welcomed that the campaign in Lleida, where Pablo Hasél is from and where he is jailed, has called for a series of information pickets across the city this week, a press conference outside the jail, an open mass meeting on Thursday and a mass demonstration on Saturday.

It is crucial that the campaign be taken to working-class neighbourhoods, trade unions and left-wing political organisations in order to counter the propaganda campaign of the media, the government and right political parties. It must build towards a collective struggle of the workers and youth against the 1978 rotten regime.