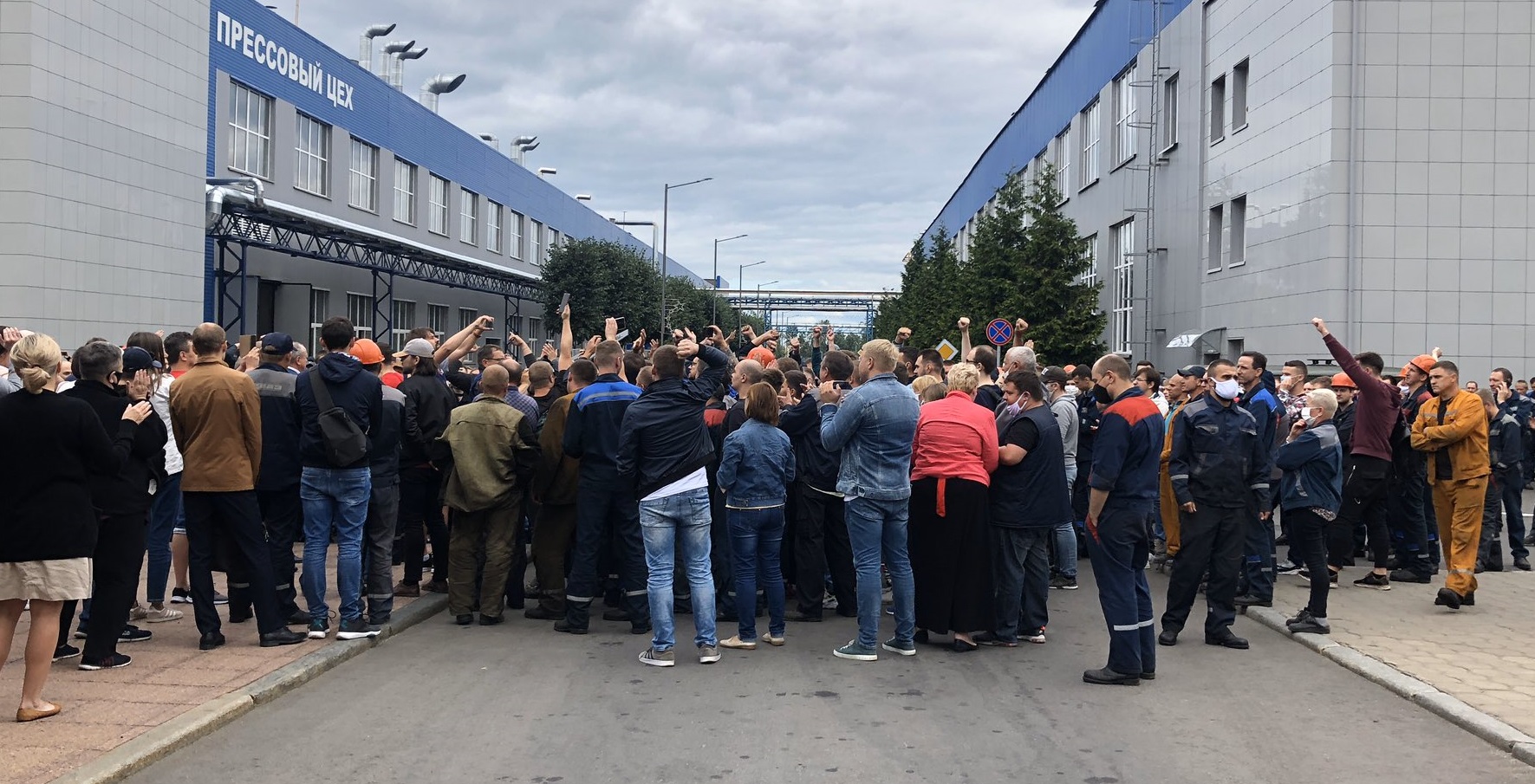 The wave of strikes in Belarus is growing. Today we can already talk about the beginning of the general strike. The entry of the working class in the arena is extremely significant and can lay the basis for an independent position of the workers. However, this means shedding any illusions in the liberal bourgeois politicians.

Grodno-Azot (chemical fertilisers), Belmedpreparaty (pharmaceutical), JSC “Grodnozhilstroy” (construction), Terrazit (PVC and aluminium), Minsk Electromechanical Plant (MEZ) and the Zhabinka sugar plant have joined the strike movement. Strikes and protests have also taken place at Agat Electromechanical Plant, and factories operated by the “Keramin” ceramics manufacturer. At the same time, the Philharmonic went on strike. And a number of small businesses too. Even employees of the Institute of Physics of the National Academy of Sciences are involved in the strikes.

As we are writing these lines, news arrives that taxi drivers at Uber and Yandex have also announced they are joining the general strike.

Most importantly, a strike started at the Belarusian Automobile Plant BelAZ. Today, thousands of BelAZ workers in the city of Zhodino were chanting: “[Lukasheno] Leave!"

Belarus, the entry of the workers into the arena is very significant. Here workers walk out at the huge Belarusian Automobile Plant BelAZ (leading manufacturer of mining dump trucks and transport equipment.) pic.twitter.com/wDai9mArIz

Earlier, enterprises such as Belarussian Steel Works BMZ, VIPRIL Control (flight controllers) and many others went on an indefinite political strike.

At the entrance of the Terrazit plant, the striking workers posted a paper with their demands: 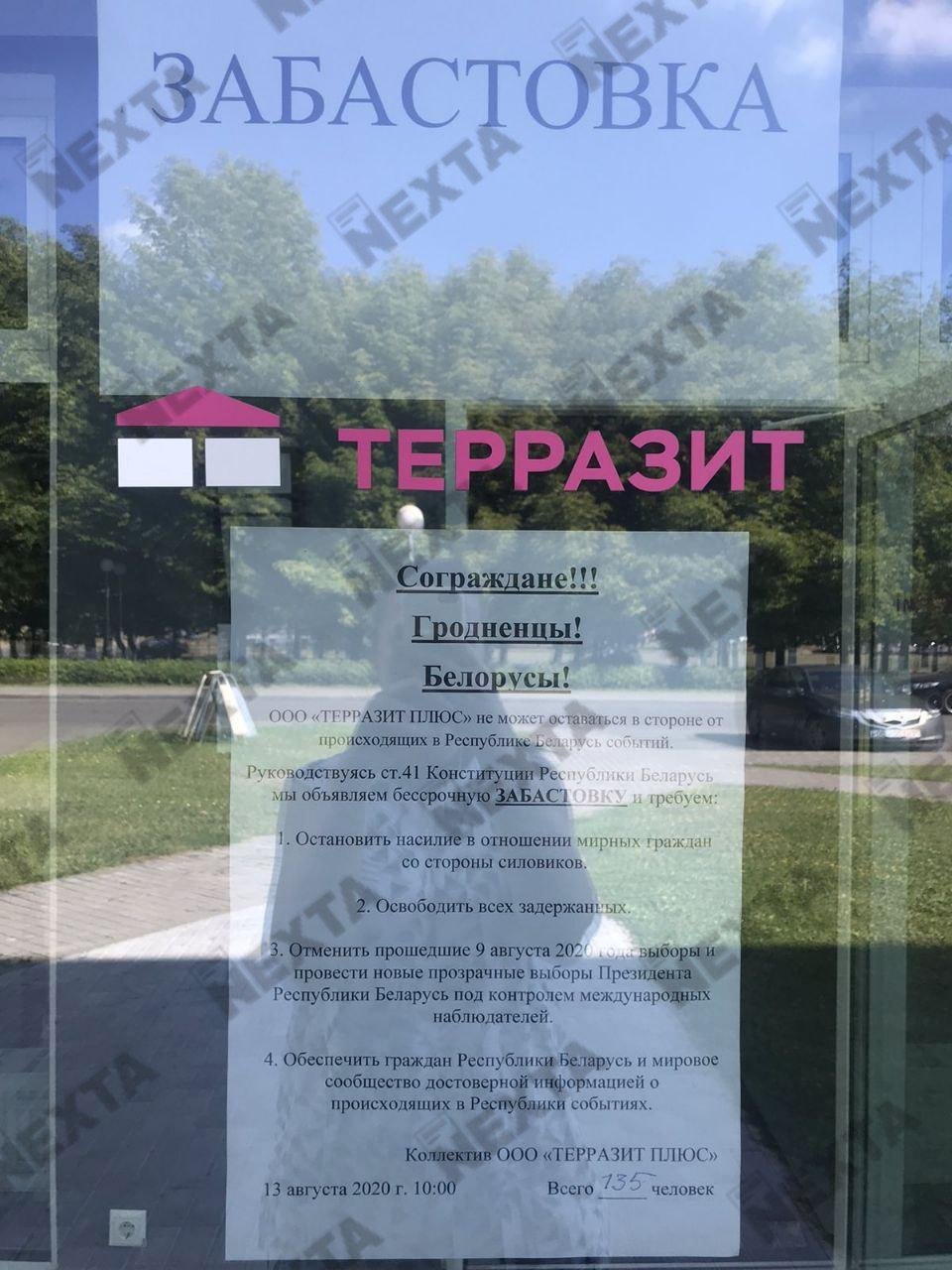 “Fellow citizens! Grodno residents! Belarusians! The workers of Terrazit Plus LLC cannot stay away from the events taking place in the republic.

“Guided by Article 41 of the Constitution, we declare a strike and demand:

“1. Stop violence against civilians by the security forces.

“3. Cancel the results of the 9 August elections and hold new transparent elections under the control of international observers.

“4. Provide the citizens of the republic and the world community with reliable information about the events taking place in the country. “

This appeal was signed by 135 workers of the company.

Against the background of large-scale strikes, many officers and rank-and-file policemen are leaving their posts or refusing to follow orders from their superiors.

What is happening now in Belarus is unprecedented precisely in terms of the participation of workers’ collectives, which for the first time since the early 1990s are beginning to realise their political power. Since the Russian strike wave of 2007 (which was still very limited in scope), when we saw the emergence of new free trade unions at the factories of Western companies, this is the first case of really significant workers’ demonstrations in the former USSR.

The workers are beginning to realise their strength and any future government in the republic will have to reckon with this.

At the same time, we will never cease warning the working people of the republic against the illusions of bourgeois politics, as we wrote earlier in our official statement. It is obvious that the liberal opposition, in its economic policy, is essentially anti-worker.

Unfortunately none of the large left forces (the BCP and Fair World) are offering an alternative. The first is not even an independent Stalinist party, but only a pitiful appendage of the regime. The leadership of the latter, despite the presence of honest and revolutionary-minded youth in its ranks, is thoroughly infected with reformist illusions and readily capitulates to the pressure of the liberals and EU-imperialism. Change in this party would require events sweeping away its current leadership.

The only way forward for workers in Belarus at present is to form their own government bodies (councils), form workers 'militias, take control of enterprises, and on this basis form their own independent workers' party. With these tools, the working people of the country will be able to hold open elections as they see fit, take control of the economy and open a new era in the history of the country and the entire former Soviet space.

Down with bourgeois illusions!