Tens of thousands of public sector workers went on strike yesterday, May 31, against the government’s austerity plan, which includes cuts in pay and pensions. The austerity package, coming into effect on June 1st, will see public sector wages slashed by 25% and pensions and unemployment benefits by 15%, with the aim of reducing the budget deficit to 6.8% of GDP. All government spending will be cut by 20% and anywhere between 80,000 and 300,000 workers out of a total of 1.4 million in the state sector will be sacked. 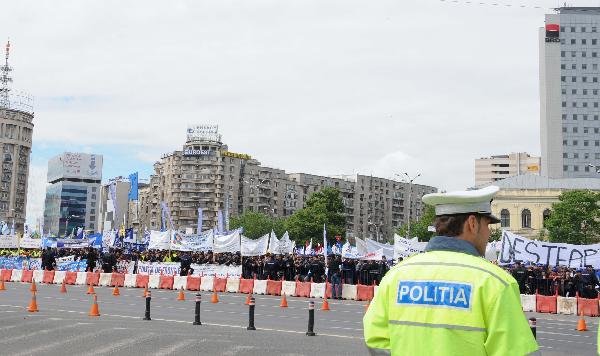 According to trade union leaders, workers in education, health care, public administration, customs and jails all stopped work against the measures introduced by the Democratic Liberal Party government. Some of them started an indefinite strike, while others just came out for a 24h strike.

Romania's economy was severely hit by the recession, and shrank by 7.1 per cent in 2009. Unemployment jumped from 4.9% in January 2009 to 8.1% in January 2010.The government had to go to the IMF for help and got a €20bn rescue loan a year ago. The economic forecast for 2010 is very weak and it is likely that the country’s economy will remain in recession. The current measures have been imposed by the IMF as a condition for disbursing a new installment of the loan.

Doru Lionachescu of Investment banking advisors Capital Partners complained bitterly that most of the money from the IMF bailout “was spent on wages and social benefits. The loan helped buy social peace but delayed the steps that should have been taken in order to cut back public spending," he said.

Central Bank governor Mugur Isarescu expressed the views of the Romanian and international capitalists in a similar vein: "We are witnessing an extreme social and political resistance to the adjustment of public expenses and particularly of the civil servants' pay roll".

This is the real problem that the right wing government is faced with, in order to cut the deficit they need to implement massive cuts in wages, pensions and benefits. The fear is that if they implement such a plan, there will be a social explosion which might lead to the fall of the government. "It really takes a lot of courage to take such steps. The risk of losing voters is enormous," said Andreea Paul, an economic advisor to prime minister Emil Bloc. The Romanian ruling class faces the same stark choices faced by the ruling classes in other European countries, but they start from a much weaker position.

International capital fears that the government might “lose its nerve” again and give in to the protesters. An auction of government bonds in May failed as no investors were prepared to gamble their money.

This program of cuts comes on top of a situation of crisis in health care, education and other sectors. Doctor Florin Chirulescu, a leader of the hospital workers described the dire situation they already face: "We don't have film for X-rays. We lack most supplies," he said. "I postponed two operations last week because I did not have surgical thread. A lady patient made a €500 (£424) donation so we could buy more and treat other patients. Patients are asked to buy plasters, bandages, other supplies."

The response of the workers to this attempt to make them pay for the crisis did not wait. Already in April teachers started a wave of strikes, which in some cases were supported by students protesting cuts in benefits. There was also a one day wild-cat strike by Bucharest transport workers. Pressure was building from below, particularly in the public sector and amongst pensioners which finally forced the trade union leaders to organise some official action.

More than 50,000 people, many of them pensioners, demonstrated on May 19th as the austerity package was announced. This was one of the largest demonstrations in Romania since the overthrow of the hated Ceausescu regime in 1989, and the mood was very angry.

The question was posed point blank of getting rid of the right wing government. "We want the government to fall or they will destroy us," said Maria Vasile, a 42-year-old teacher. "It's either us or them." According to one report, Marian Gruia, head of the policemen's union, called on Romanians to unite, "as we did in 1989, when we overthrew the dictatorship" of Nicolae Ceausescu.

The experience of the restoration of capitalism has been extremely bitter for the majority of Romanians. The wholesale privatization of the economy led to the destruction of 3.5 million jobs (including half of all industrial jobs). When finally the economy started to grow, in 2004, this only exacerbated inequality. It is calculated that in 2007 there were 3.4 Romanian workers abroad, almost half of them working illegally.

However, rapid economic growth, which lasted until 2008, created a new feeling of confidence amongst the workers which was exemplified by the victorious all-out strike of 10,000 Renault Dacia workers in March and April 2008. Now, that period of growth, based on credit, housing market speculation, etc, has come to an abrupt end and the ruling class wants to make workers, pensioners, teachers, doctors and the Romanian population in general pay for the crisis of capitalism.

There is a strong feeling of resentment, as many of the top officials in the old Stalinist regime have found their way into the new capitalist ruling class, amassing obscene wealth and privileges, in many cases through less than transparent means.

According to a poll by the Bureau of Social Research, half of the people think that Romania is worse off today than under Ceausescu, with 56% saying that under the “communist” regime ordinary people were treated with more respect, and 60% of Romanians think that politicians are more corrupt today than before 1989. The experience of capitalism has taught the Romanian population many lessons.

The stage is set for major class battles.