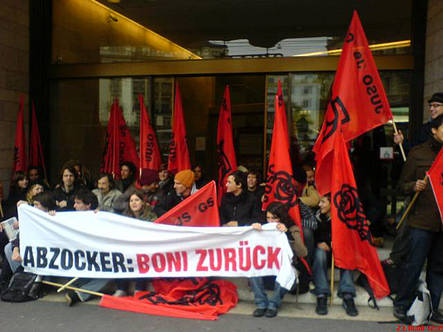 Switzerland is also being affected by the global crisis of capitalism, with growing pressure on Swiss workers. In the recent elections, although the Social Democrats received the lowest number of votes in 20 years, where candidates posed the real issues facing workers, such as jobs, wages and housing, they did remarkably well. Here we publish an analysis by the Swiss Marxists of Der Funke.

On Sunday, 23 October a new parliament was elected in Switzerland. Although not much changed in the general balance of forces inside the two houses of parliament (Nationalrat and Ständerat), there was a clear shift of votes. All the traditional parties from left to right lost votes while the two new parties, the GLP and the BDP won 4% and 5.4%.

This “punishment” of all the traditional parties mainly expresses a broad disillusionment in the political elite, but also the hope that some change can be achieved through the new parties. These parties are both the result of splits that have taken place over the last four years. The GLP (Green-Liberal Party) is a split to the right from the Green Party and came out particularly strongly in the urban areas. The BDP (Bourgeois-Democratic Party) split from the nationalist SVP four years ago after a drama around the national government elections and is an expression of the contradictions within the SVP itself.

The nationalist SVP, being the big winner over the last decade, this time suffered a significant loss of support of -2.3%. This is due on the one hand to the BDP split taking many votes with them. On the other hand it also shows that the racist propaganda, the main content of the SVP’s propaganda, has reached as far as it can go and that the real issues of the workers (the main voter base of the SVP being the rural proletariat) with the growing impact of the global economic crisis on Switzerland can no longer be answered with pure xenophobia. Although with its 26.6% the SVP is still the strongest in parliament, this setback has shaken the party deeply and will bring further to the surface the contradictions of being a bourgeois party of big business while depending mainly on a proletarian voter base.

In the last few years we have constantly explained that the strength of the right-wing SVP lies mainly in the weakness of the left, in the weakness of the social-democratic SPS. After its big loss of nearly 4% in the previous elections four years ago the SPS has now lost a further 0.8%. At the same time they were able to win three seats. In Switzerland the national MPs are elected for every State (Canton). In proportion to its size each Canton has a certain amount of seats to be allocated, so in every one of the 26 Cantons different candidates run and different campaigns are held. Although the party leaders have tried to make out that this winning of three new seats was a victory, the fact is that with only 18.7% the SPS is at its lowest level of support since 1991.

It is interesting to see, in which Cantons and with which campaigns the SPS was able to win support. Generally it can be said that the SPS was successful where they put the following issues at the centre of their campaigns: jobs, wages and pension. With these left campaigns and programmes the party was actually saved from an even worse defeat. This will certainly have its effect inside the party. Already now certain left elements, one of them being the socialist youth JUSO, are discussing the results of these elections intensely and are drawing conclusions. It is clear, that the SPS is very weak and that the way forward for the party can only be achieved through a clear cut break with their collaborationist tradition and with an orientation to the workers. Already the political attacks against the working class that we will be facing in the coming years are being discussed openly (one main issue will be the raising of the age of retirement) and the SPS must prepare to fight an uncompromising struggle in defence of all the past gains and interests of the workers.

The potential success of such an approach can be shown in the example of the JUSO in the Canton of Zürich. The JUSO, running its campaign against the redistribution of wages, for the taxation of the rich and the nationalisation of the banks, while at the same time playing a leading role in the occupations of the Paradeplatz in Zürich (the symbol of Swiss finance capital) led to an almost doubling of its votes and is now the strongest youth-party in the Canton. Similar results were achieved in many other Cantons (with two candidates of the JUSO being elected).

In the Canton of Zürich, one of our comrades from Der Funke Switzerland ran for elections on the list of the JUSO. Campaigning mainly in apprentice schools (a vast majority of the youth start an apprenticeship at the age of 16) it became clear that many young workers are very open to socialist ideas. In the public meetings where our candidate participated, she was able to convince a large number of young workers not only of her anti-racist campaign and for the need to nationalise the banks and the main industries under democratic workers’ control but also of the need to become active. She was thus able to win some of them to the JUSO and has since been having political discussions with others.

A general feeling of injustice brings many young workers and students to draw radical conclusions as was revealed by the questions they posed and the comments made in these public meetings, but also in the follow-up private discussions and as is also shown by the continuing growth of the JUSO. Basing herself on the following programme, our candidate could connect with this feeling and win votes mainly from the SPS base and from trade union activists. She achieved a good result of 5443 votes.

In the interests of working people and the youth – without compromise!

The last years have been marked by worsening conditions at work: demands and stress have increased, while wages have barely risen. Furthermore, spending on education, health or social services has been cut wherever possible. And all this during times when the economy was actually still going rather well. Today, things have changed: the economic crisis, which is shaking the world, does not stop at the Swiss borders. Further attacks from the bourgeois, further sackings and cuts in wages, further cuts and austerity measures will follow. While the bourgeois get richer and richer (the richest 1% of the Swiss own over 50% of overall wealth), working people and the youth have to cope with less and less, also in Switzerland. It is clearer than ever that those who profit from this economic system are those that already have enough. Especially we, the young people on a world scale, are the victims of these policies, serving only the wellbeing of a handful. We don’t want to pay for the anti-social behaviour of the bourgeois with our future!

Not a generation without perspectives!

In July 2011, 15,150 young people aged between 15 and 24 were unemployed. That is simply 15,150 too many! Everyone has the right to learn a trade. He or she who has completed an apprenticeship is perfectly qualified for professional life. We have the right to exercise our skills in practice after our apprenticeship and to receive a fair wage for this work! We also have the right to develop our skills in further academic studies, independently of our financial background, that is equal opportunities!

High living costs don’t just pose problems in regards to housing. For many it’s getting harder and harder to lead a decent life with their wages. Today over 400,000 people (10% of the total labour force) work for less then 22 francs an hour. This equals less than 4,000 gross francs per month. In regards to wages we also see a constant redistribution from the bottom to the top. Over the last ten years the highest salaries have risen by 21.3%, while the lowest wages have only risen by 2%. Only those at the top have benefited from the economic growth and the increase in productivity. This has to stop!

The economy has to serve us!

But who should pay for all of this? This is the question the bourgeois always ask when the point of raising the living standards of the working majority is posed. But when banks go under because of speculation, billions are paid without even asking; just too assure their profits. So there obviously is enough money. The question is rather who decides what is done with it. Who controls the economy controls politics as well. And we can indeed see what the consequence of these policies are: thousands of people die of hunger, sickness and war every day, while the environment is being destroyed for the sake of quick profits. The economy has to serve us and not the other way around. We want to collectively decide what is to be done with the wealth we produce. We can only do so by finally submitting the most important economic sectors to our common control.