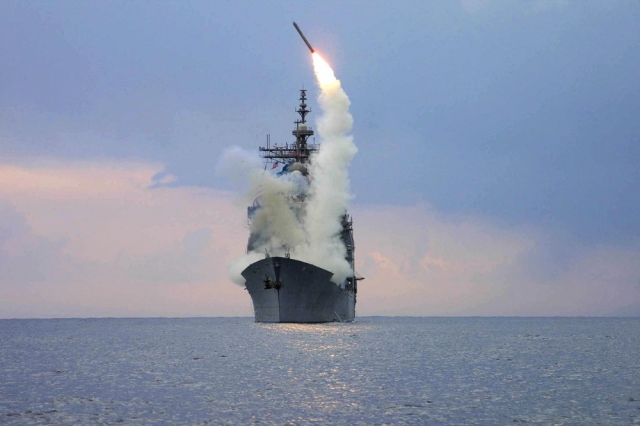 Yesterday the US navy launched a series of missile attacks on the Al Shayrat airbase in the central governorate of Homs in Syria. Seven people are claimed to have been killed and several fighter jets are said to have been damaged.

Without any enquiry and not even bothering to go get the backing of any international institution, in a complete reversal of his earlier stated position of not intervening in Syria, Trump has launched a unilateral strike against forces of the Syrian government.

The stated justification for this attack has been the use of chemical weapons in the town of Khan Shaykhun in North Western Syria, a town which was targeted by the Syrian air force. Of course there is very little evidence of what has actually happened and who has done it. The majority of "experts" cited in western media have been from aid organisations such as Doctors Without Borders, or the White Helmets, a widely discredited organisation with ties to Al Qaeda and the wider Islamist movement in Syria. In fact, Khan Shaykhun and the governorate of Idlib where it is located, is controlled by the Syrian wing of Al Qaeda, called Hayat Tahrir Al-Sham (HTS). All information coming out of the region is tightly controlled by the Islamists and there is no way of confirming anything.

Of course the Assad regime is fully capable at carrying out such an attack. But at this given point it has nothing to gain from using chemical weapons. It has the upper hand in the civil war, thanks to Russia’s backing. It is moving ahead in the field and it is just a few days away from “peace talks” which will solidify its position. Representatives of the Trump administration have repeatedly pointed out that they see Assad as the only force capable of defeating the Islamists and stabilising Syria. Another wing of the US ruling class however, is very worried about this situation where the US is conceding room to Assad and the Russian’s. This wing, supported by Saudi Arabia see the victory of Assad, Russia and Iran as a direct threat to their positions in the region.

Their puppet forces, HTS and its allies, have been in a weak position since the recapture of Aleppo in December 2016. This was clearly revealed only a few weeks ago, when the Saudi and CIA backed groups in Idlib had to rapidly retreat after they had embarked on a large scale offensive towards the town of Hama. An offensive which was the first major break of a nationwide ceasefire agreed by the major parties in the war last December. The present turn of events is benefiting the Islamists and their backers far more than any other side of the war. Summed up, there is no definitive proof that the Assad regime carried out this chemical attack. But then again the lack of proof has never stopped US imperialism from bombing anything.

Chemical weapons are a particularly cruel form of warfare. But the cynical use of this chemical attack for propaganda reasons by the imperialists has been nauseating to say the least. As if the barbarism, murdering and pillaging of the whole region is somehow not that bad, until someone uses chemical weapons. As if neverending war, the death of hundreds of thousands of children and the destruction of the very basis for civilised life is somehow morally acceptable, as long as this killing is only done with swords, guns, bombs, aerial strikes, and sanctions.

Only a few weeks ago the western backed Mosul operation had to be stopped after over 200 civilians who were hiding in a basement were killed in a US airstrike. The real reason for the pause was not so much because people were dying, but because the people of Mosul, who have lived under ISIS rule for the past few years, are becoming increasingly hostile towards Iraqi and coalition forces. Of course, when the Russians and the Syrians were bombing Aleppo there was no end to the crocodile tears and condemnation. But no one is speaking about Mosul today.

Yemen is another conveniently ignored matter. 13 million men women and children are being purposely starved to death by the rotten Saudi monarchy. Schools and hospitals are bombed on a daily basis with outlawed cluster munitions which are sold to the Saudis by British and US companies. What is the role of British and US imperialism there? Active logistic, intelligence and naval support for the war and the blockade.

No power has killed more people in the Middle East than US imperialism has. The occupation of Iraq was also based on claims by "expert sources" and accusations of use of chemical and other weapons of mass destruction which were proved to be false. It has, according to Nobel prize winning organisation Physicians for Social Responsibility, directly led to up to one million killed. Before that, the UN itself set the death toll of Iraqi civilians affected by the US imposed sanctions at 1.7 million. That is nearly 3 million Iraqis killed by the US since 1990. And what about the depleted uranium used in both Iraq wars? Or the white phosphorus bombs dropped on Fallujah by US troops in 2004 and which to this day have left a city with high rates of birth defects? In 1996, when asked about half a million people dying from US sanctions in Iraq, Madeleine Albright said “we think the price is worth it.”

By embarking on its barbaric war in Iraq, US imperialism has destabilised the whole region. In Syria, the US and its regional allies Turkey, Jordan and Saudi Arabia, intervened to hijack the initial revolutionary movement and push it towards a reactionary sectarian conflict. The direct and indirect support for Al Qaeda and other reactionary jihadist organisations has created a Frankenstein’s monster which will haunt the whole region, as well as the west, like a plague for many decades to come.

It is clear that for Donald Trump and the US ruling class, the destinies of Syrians or any other people are not important. Neither do they care about who has killed who and whether they have used chemical weapons or not. The sudden shift in Trump’s policy towards Assad is a 180 degree turn from his position of just a few weeks ago when he was claiming that the only way out of the mess in Syria was a joint effort with Russia and Assad. It is clear that Trump is under pressure from sections of the US ruling class who want to stop his rapprochement with Putin. Not that Trump has any moral qualms in going along with this. In this context, the chemical attack was a “convenient” excuse to shape public opinion in preparation for an attack.

It was a cynical and calculated move with the sole purpose of defending the narrow interests of the US ruling class and those of its allies, and to send a signal, in particular to Russia, that US imperialism is still "in the game" in Syria, to divide the Russia-Iran-Assad alliance and to prepare to negotiate the future of Assad. That is, it is nothing but a continuation of the reactionary imperialist civil war from which the Syrian people will get nothing but more misery.

Unfortunately, a large part of the left in the west has jumped on the bandwagon and are echoing the line of western imperialism and the mass media. Of course there is nothing progressive in the Assad regime or in the dirty games of Russia in Syria. But in trying to oppose these powers, some are putting themselves in the same camp as the most reactionary force on the planet, that of US imperialism. Hastily putting their weight behind the US bombing, they seem to forget what western intervention, without exception, has led to in the history of the Middle East - more instability and barbarism. Nevertheless, these "leftists" are not criticising the US for intervening, but for not intervening enough!

The reality is that in the absence of a real working class based revolutionary movement, a western backed military overthrow of the Assad regime will mean the overrunning of Syria by ISIS and western-backed Al Qaeda linked groups who have no major principled disagreements with ISIS. The barbaric mess caused by western intervention in Libya should be a lesson as to the reactionary nature of such interventions. The Syrian people are well aware of this and, if anything, this attack will aid Assad rally them behind him. 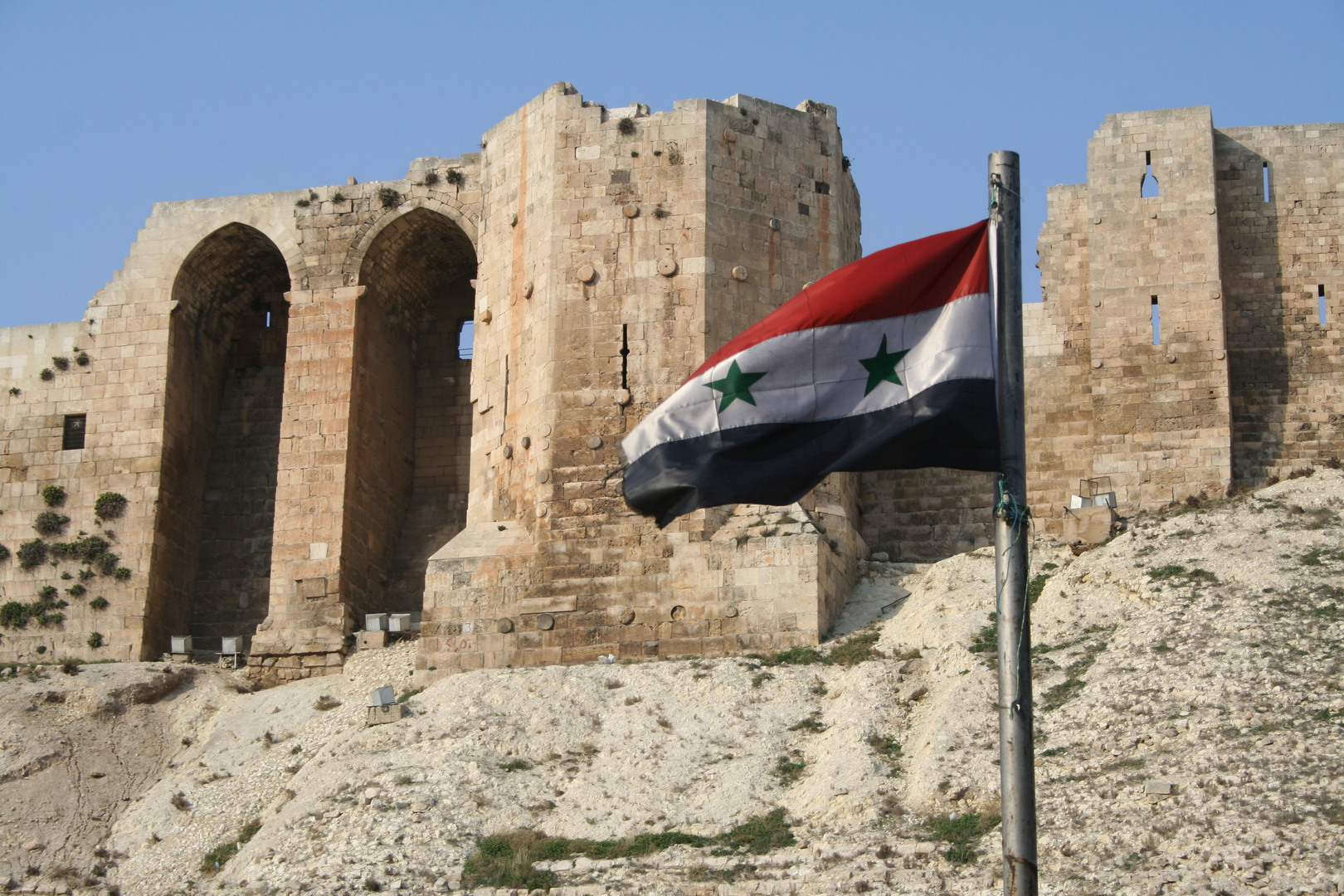 The only real solution is a clear independent class position. To the workers and youth in the west, who genuinely want to end the misery and barbarism in the Middle East, we must say clearly: the enemy is at home! The same people who attack the working classes in the west, who impose the violence of austerity, unemployment and falling living standards at home, have been killing and murdering the working masses of the Middle East for decades if not more.

The most reactionary powers in the Middle East are those of western imperialism and its allies, who want to dominate, shackle and exploit the peoples of that region and who are leaning on the most reactionary backward groups and layers to do so. Without the support of western imperialism, all of the Jihadi groups and almost all of the reactionary dictatorships in the region would collapse. At the same time we cannot give any support to the competitors of our own imperialists, to Putin, Assad or the Mullahs in Iran, who are all more than willing to make a deal with them as long as their own narrow interests are protected.

The crisis in the Middle East is a direct result of the dead end of world capitalism. An anarchic system in deep crisis, which in its "periphery" is sinking into barbarism. The US intervention in Syria will only make matters worse. What is needed is not to expand the war in the Middle East, but to bring it back home, in the form of class struggle against the ruling classes. A ruling class which plays no productive role but which spreads terror and destruction everywhere.