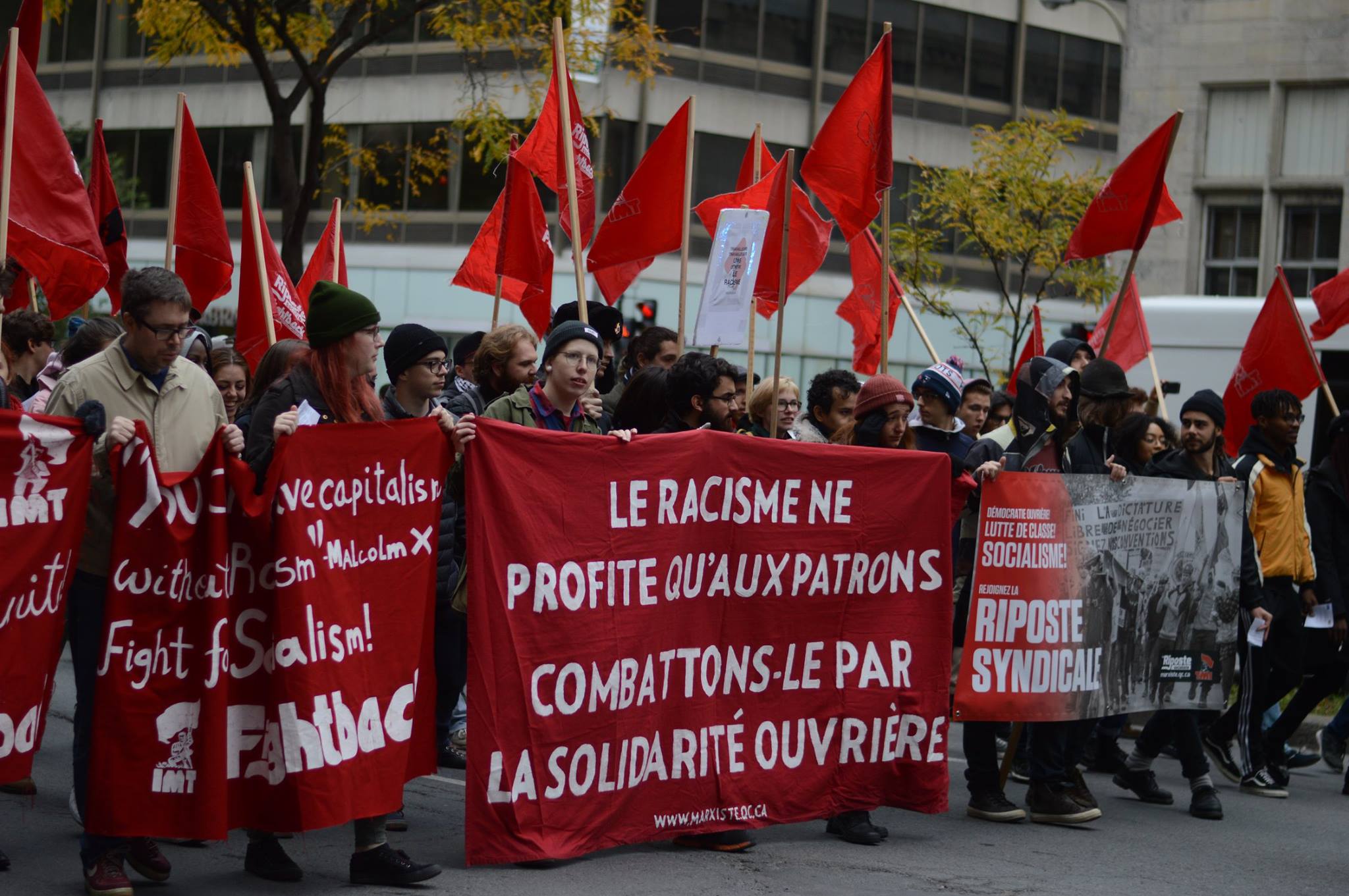 On 7 October, thousands of people gathered in downtown Montréal to march against racism and the newly elected CAQ government. The demonstration brought out a large number of immigrant families, grandparents and children included, all of whom were shocked by the election of the anti-immigrant government. La Riposte socialiste organised the socialist contingent of over 60 activists on the march.

The demonstration was planned before the election of Francois Legault and the CAQ, but the outrage and anger that resulted from the election played a massive part in bringing out hundreds of ordinary people who otherwise might not have attended. The CAQ was elected on an anti-immigrant platform, and won a sweeping majority in the provincial election on 1 October. In the days following the CAQ’s victory Legault made his intentions known, threatening to use the infamous “notwithstanding clause” to forbid public sector employees to wear niqabs, kipas, and other “ostentatious” religious symbols.

La Riposte socialiste was present in large numbers well before the march began, greeting people as they arrived, and selling copies of the latest issue of our French paper which featured the headline, “FIGHT THE CAQ!” The paper was practically selling itself, with many families buying copies and holding them as protest signs, as can be seen in this article from La Presse. We were interviewed numerous times, and drew crowds around our literature tables. By the time the march began, we had over 60 people in the socialist contingent, making for our largest contingent ever!

The march started at Parc Émilie-Gamelin, and proceeded through the heart of Montréal’s business district on Boulevard René-Lévesque. Our spirits were high, and we visibly affected passersby with our optimism. As chants echoed through the streets, many onlookers waved and pumped clenched fists in the air in support.

Marxists against the CAQ!

At the end of the march, demonstrators gathered to listen to the last round of speeches. We heard from indigenous groups and organisations engaged in fighting racism and Islamophobia. They denounced racism and the rising intolerance that has been encouraged by the debate about religious symbols. Fehr Marouf, an activist with La Riposte Socialiste, spoke to the crowd. He highlighted that the CAQ victory was the result of the increased polarisation, to the left and to the right, in our society provoked by the crisis of the capitalist system. In this context, people are looking for someone to blame for their declining standards of living. The right wing places the blame on immigrants and religious minorities. Such racism is a useful tool to divide us against each other, and obscure who really is to blame, “the capitalists and their rotten system!” As Fehr spoke, he had to pause between each sentence, as the cheers drowned out his voice. Some in the crowd exclaimed “C’est ça! c’est ça!” (That’s it! that’s it!), while others hugged their neighbours, jumping with enthusiasm! Fehr concluded that it is not enough simply to be against racism, we must also fight for something. We must replace capitalism, which offers nothing but permanent austerity and more and more racism, with socialism! We need a revolution!

There is a clear shift in Québecois society. There is polarisation not only to the right with the CAQ government, but also to the left, as was demonstrated by the good showing for Quebec solidaire. This polarisation is spurring people to take to the streets; and not only the usual activists, but normal everyday people who are being radicalised by events and are looking for answers. By the end of the march, we had sold more than 160 copies of La Riposte Socialiste, mostly to working-class people and immigrants. The ground is shifting beneath our feet, and people are looking to La Riposte socialiste for answers. Though we are still a small force, we are growing rapidly and we need your help!