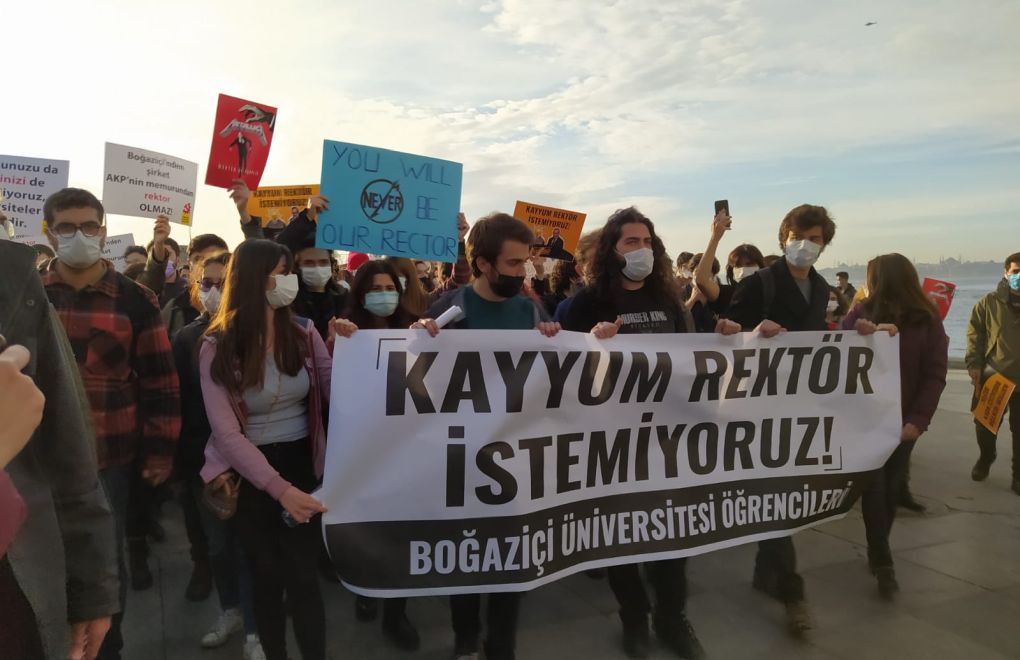 Last Tuesday, a wave of student protests erupted in Turkey's biggest city, Istanbul. Students from the Boğaziçi University protested against the new rector of the university and former wannabe parliamentary candidate for President Recep Tayyip Erdogan’s AKP-party, Melih Bulu, who was appointed to the university post on 2 January by Erdogan’s decree.

Already on Monday, a group of probably 30 to 40 students had met up. But on Tuesday, hundreds of students from Boğaziçi, but also other institutions, shouted slogans like "Melih Bulu is not our rector!", and "We don't want a rector appointed by the state!" When they met on the university campus, they were confronted by police. Scuffles broke out when the police used pepper spray, water cannon and “non-lethal” munitions. They tried to deny the students entrance to the premises and removed the ones already on it, arresting some. When the police managed to clear the premises, they shut the doors by using handcuffs – an image that promptly was taken up all over social media as a symbol of the attacks on free speech in Turkey. Also on the same day, lecturers at the university organised a protest and deliberately turned their back on the rector at his inauguration ceremony, chanting “our students must be released immediately”.

These protests led to a swift, but typical repressive reaction by the Turkish state apparatus, who tried to cow the protesters into submission and stop them from spreading. In the following night, police (including the Special Forces) raided homes of alleged participants (in one instance, breaking through the walls of a building to enter) and arrested 36 persons on Tuesday night/early Wednesday morning alone.

Istanbul police/SWAT teams in full gear launching a dawn operation to detain #BogaziciUniversity students who protested at the appointing of a new rector politically affiliated to the governing AKP. Swat vs student - could it be an excessive use of force? pic.twitter.com/Re53V5LqeI

The governor of Istanbul also forbade all demonstrations in the neighbourhoods of Besiktas and  Sariyer, cynically justified on the basis of the pandemic. Also, the premises of the university were fully sealed off by fences covering a large area, denying any further entrance for a planned demonstration on Wednesday. The students were labeled as either “terrorists” or “spoiled privileged kids” in the media, as the Boğaziçi university is highly prestigious. To counter this, the students on two-hour notice changed the location of the protest, drawing a crowd of around 1,000, who marched in the neighbourhood of Beşiktaş on the European side before joining a rally on the Asian side of the Bosporus. Meanwhile, several hundred met on the university campus nonetheless. Since then, smaller protests continued and there were also solidarity-demonstrations and rallies in some other cities, including the capital Ankara. At the time of writing on Friday, again several hundred students protested on campus.

The target of the demonstrations is not so much Bulu himself but what he represents. Showing not only a great sense of determination but also of humour, during the blockade of a university building, students played Metallica’s “Master of Puppets”, loudly singing along “obey your master” to the new rector, who earlier had stated in public that he likes to listen to metal music in an attempt to become more likeable.

Students in Boğaziçi calls the trustee rector of AKP, Melih Bulu to resign by playing Master Of Puppets by Metallica after he specifically stated that he listens metal music. pic.twitter.com/KzR1R7wEjH

It is very clear who is the master. For years now, state president Recep Tayyip Erdogan has systematically purged the universities and schools, the security apparatus, the media and even his own ruling party and replaced people deemed “critical” with his loyal lap dogs, pushing the boundary of what is “acceptable” further and further in the direction of personal loyalty towards him and his regime.

These protests shed light on just another push in that direction. According to lecturers on Boğaziçi-University, this is the first time since the military coup of 1980 that a university director was appointed by the president and not elected by the university itself. The power to do that was first granted to Erdogan after the attempted coup of 2016, in the aftermath of which tens of thousands of people were arrested. This power was later asserted in 2018, when the authority of the president was enormously strengthened. His latest move is only one more step towards concentrating all power in his own hands.

But Erdogan's personal ambitions, contrary to popular belief, are not the main driving force in this process. His personality - erratically reacting to events, but always trying to be decisive in his actions - undoubtedly plays a role in how events play out and decisions are made. But in the end this is not the cause, but just a sign of the state the Turkish capitalist system finds itself in.

In the last few years, after a prolonged boom of the economy in the early 2000s, Turkey has staggered from crisis to crisis. The living standards of the masses are getting worse and worse, especially since the outbreak of the world slump triggered by the pandemic. Unemployment, especially amongst the youth, is rising. Inflation is soaring and is expected to hit 15 percent soon. But the official rate of inflation is set far too low. With a minimum wage, one was able to buy 2,324 loaves of bread in the beginning of 2020. At the end of that year, that number plummeted to 1,550. Wages have been undermined rapidly for the past few years and millions are at risk of falling into poverty. In the 12 months since November 2019, the sale of red meat plummeted by 30 percent and the sale of pasta as a cheap staple increased by 25 percent. 38 percent of households cannot afford their food needs. 70 percent are just scraping by.

And although the economy is set to recover slightly in the immediate term, with very high interest rates and corporate and private debt jumping by 40 percent last year, a debt crisis of catastrophic proportions looms large on the horizon.

This is leading to a situation where the traditional base of Erdogan's AKP party is alienated more and more, as shown in election after election: most recently in the local elections one-and-a-half years ago. Society as a whole is more and more like a volcano ready to erupt in class struggle. In an attempt to preserve power in this situation, Erdogan is relying increasingly on diplomatic and military foreign adventures (as seen in his diplomatic clashes with the EU and USA, the sabre-rattling with Greece, the wars in Syria and Libya, and intervention in the Armenia-Azerbaijan conflict). He is furthering divisions on religious and national lines in Turkey via an increasingly Turkish nationalist and religiously conservative agenda, and through direct state repression. But all of this will only exacerbate the contradictions in society in the long run.

Learn lessons from the past: conquer the future!

It is thus no coincidence that the appointment of Bulu led to a backlash. Turkish society is ripe for a revolutionary mass movement. What we see stirring amongst the youth now is an indication of a general dissatisfaction that runs very deep in Turkish society. These events anticipate big social explosions in the next period, and Erdogan is right to be worried.

There is precedent for this. In the 1960s, a wave of revolutionary student activism was the first sign of a wave of bitter class struggle, which led the country to the brink of revolution and only truly ended with the military coup of 1980. Had it not been for the incorrect methods and politics of the leadership of the workers’ and students’ organisations, capitalism would have been overthrown long ago in Turkey.

This struggle is not an isolated phenomenon: a similar process to that in the ‘60 and ‘70s is opening up now. This is a reflection of the dead end of Turkish capitalism. At a certain stage, the working class will come onto the scene and shake society to its foundations. The task for the revolutionary students of today is to thoroughly prepare for this, in theory as well as in practice. They must draw inspiration from past struggles and learn from political mistakes in order to conquer the future: Erdogan's regime and capitalism in Turkey will be finished when the workers and youth unite in their struggle

What is lacking today, as in the ‘60s and ‘70s, is a revolutionary leadership on the firm basis of the ideas of Marx, Engels, Lenin and Trotsky; a leadership unwilling to make any concessions to the pressure of “fashionable” petty-bourgeois or bourgeois ideas in the universities. This also means combatting the twin pitfalls opportunism and ultra leftism, which in the past led the movement into a blind alley. This is the best way to prepare for the re-arming of the working class, once it reawakes. Armed with the ideas of Marxism, nothing can stand in the way of the mighty Turkish proletariat.