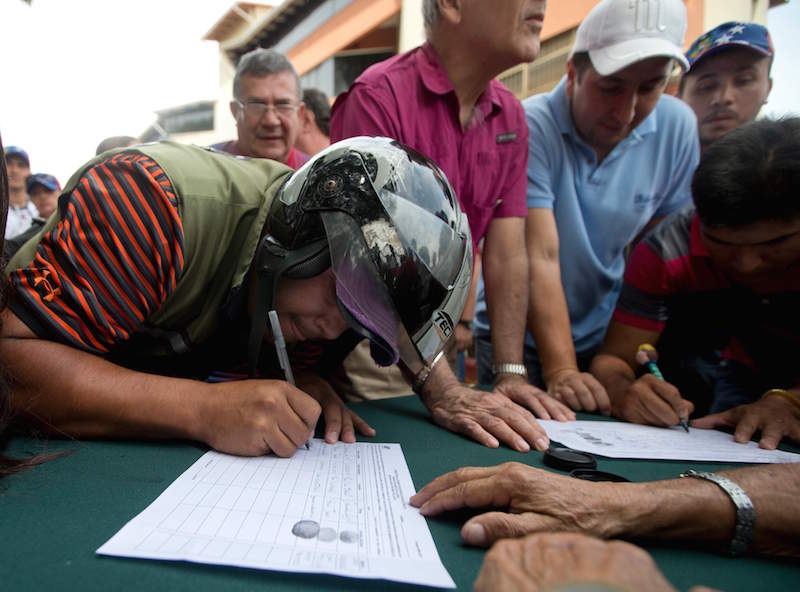 Genuine Marxists oppose the attempts of the Venezuelan oligarchy, backed by imperialism, to overthrow President Chavez. Why do we take this position? Because a defeat for Chavez in the referendum would be a heavy blow against the workers and peasants of all Latin America. It would be a victory for imperialism and the forces of reaction everywhere. The barricades have been drawn in this class war and it is necessary to take sides clearly and unambiguously.

From the very beginning Marxist.com, the Hands off Venezuela campaign and the Revolutionary Marxist Current have fought against the attempts of the Venezuelan opposition, backed by US imperialism, to overthrow the democratically elected and progressive government of Hugo Chavez.

Why do we take this position? Because a defeat for Chavez in the referendum would be a heavy blow against the workers and peasants of all Latin America. It would be a victory for imperialism and the forces of reaction everywhere. The barricades have been drawn in this class war and it is necessary to take sides clearly and unambiguously.

The struggle for the socialist transformation of society consists of a series of battles. The workers and peasants are confronted with a number of partial struggles against the class enemy – the landlords, bankers, capitalists and imperialists. It is only by participating with the utmost energy and determination in such struggles that the masses can acquire the necessary experience to raise themselves to the level needed to carry out a decisive change in society.

The place of the revolutionary Marxists is side by side with our class brothers and sisters. We will always be in the first ranks of the struggle, striving to push the movement forward, while simultaneously attempting to win over the vanguard to the programme and perspective of the socialist revolution.

With unerring class instinct the workers and peasants of Venezuela have understood the need to inflict a decisive defeat on the oligarchy and imperialism in the referendum. It is necessary to keep the old reactionary gangsters out of the Presidential Palace! It is necessary to stop them from putting the clock back and to return to ruling Venezuela the old way. That is the immediate and most pressing task.

The opposition has nothing to do with democracy. Reactionary scoundrels like Pedro Carmona and Carlos Andres Perez describe themselves as “democrats”, when in realty everyone knows that they are the sworn enemies of democracy, as shown by the coup of April 12, 2002. Carlos Andres Pérez himself, who is in the Dominican Republic fleeing from corruption charges, said in a recent statement that the only way to remove Chavez is by violent means and that after that the country would need at least five years of dictatorship! As for Washington, George Bush (who has never won a fair election) backed the reactionary coup with indecent haste and no questions asked. The speeches of these gentlemen about “democracy” only serve to evoke loud laughter.

Had these reactionary gangsters succeeded in 2002, we know very well what kind of “democracy” they would have imposed upon Venezuela. We remember the two days of voluntary blackout of the local media when supporters and officials of the Chavez government were being hunted down, while the “democratic” media maintained a discreet silence.

For a long time the opposition has made no secret of its desire to see Chavez overthrown and even killed. These “Christian” ladies and gentlemen are motivated not by love of their country but by blind hate – class hate. They hate Hugo Chavez because they see him as the leader of the poor and exploited that they hate and fear. He has brought the masses to their feet and made them conscious of their power. This is the real reason for the implacable hatred with which the President is regarded by the rich.

The victory of the opposition would be a disaster for the working class and the masses of Venezuela. It would lead to the abolition of the progressive measures introduced by the Chavez government and increase the stranglehold of imperialism and of private monopoly capital over the Venezuelan economy. It would push the workers and peasants back into the old servitude from which they are struggling to emerge.

Behind the Coordinadora Democratica stands all that is rotten, retrograde and corrupt in Venezuelan society. Here are the landlords, bankers and capitalists who have sucked the blood of the people of Venezuela for generations and sold the country out to imperialism at bargain basement prices. Here are the hired agents of Washington. Here are the “gilded youth” and the retired actresses, the spoilt brats of the rich and the fascists, the reactionaries and gangsters of all shapes and sizes.

Here are the corrupt and reactionary managers of PDVSA, who did not hesitate to drag the country to the brink of bankruptcy and ruin by declaring a so-called strike "until the President resigns", and are now resorting to other means to attain the same end. Here are the corrupt “trade union” bureaucrats who have long ago sold their souls to the CIA and the oligarchy. Here are the prostitutes and liars of the millionaire press and television. Here are the cardinals and bishops who backed the coup in 2002 and used lies and blackmail to try to force the President to resign.

These are the forces that back the opposition and are calling for a “yes” vote on Sunday. What forces are on the other side?

In this class struggle, we are in no doubt where we stand.

Comrades! Workers and youth of Venezuela! Let us unite to smash the opposition on Sunday 15 August! And then let us continue the fight to carry the Revolution through to the end!

In spite of the lies of the pro-opposition media and its scandalous manipulation of information, the opposition seems to be heading for a well-deserved defeat next Sunday. With just one week to go before the decisive Presidential recall referendum scheduled for Sunday, August 15, a statistical review of all Venezuelan opinion polls (Mercanalisis, Opinion Research, Alfredo Keller, Hinterlaces and Evans) showed that President Chavez was in the lead. Published last Saturday, August 07, 2004 in VHeadline.com it indicated that President Hugo Chavez Frias will continue in office after the results of the August 15 recall referendum are made known.Close on 14 million Venezuelan voters are registered to ratify Chavez Frias in the Presidency through January 10, 2007 ... or, in the increasingly unlikely event that he loses the vote, to step down and schedule fresh Presidential election within 30 days.

The result anticipated by this study was as follows:

Jesse Chacon, Venezuelan Minister of Information & Communications (MINCI), was quoted as saying that "all the pollsters ... including those who work for the opposition ... give the President an advantage of not less than 10%". This completely exposes the lies of the opposition and the capitalist media, which have been constantly plying the story that Chavez was a “dictator”. The fact of the matter is that only a massive fraud next Sunday could bring about the overthrow of the President, who has the support of the overwhelming majority of the Venezuelan people.

Chacon thought that the differences were "irreversible at this point" despite fraudulent results published in some newspapers ... two opposition-controlled Caracas newspapers have been forced to admit that they have published bogus opinion surveys as part of their efforts to attack the presidency.

The Minister says the vast majority of the general public has already made up its mind on how to vote on in eight days' time ... only 10-15% remain undecided so the die is already cast!"

Let us hope that this is correct. In all probability it is. Ever since the start of the revolutionary process, the masses have shown a high degree of maturity and an instinctive grasp of political necessity. They have defeated every attempt of the counterrevolution. They have defied the guns and truncheons of the forces of reaction. They have brushed aside the lying torrent of propaganda of the media.

This time is no different. The attempt of the opposition to utilise the device of the recall referendum to stage a coup by constitutional means has yet again roused the masses to action. The campaign for a no vote has been actively supported by millions. This is the answer to all the cowards, cynics and sceptics. The masses have once again confronted the counterrevolutionaries and are blocking their path.

Is the result, then, a foregone conclusion? There are very few things in life that are absolutely certain, and even fewer in a revolution. The very fact that the recall referendum was called at all was the result of a massive fraud, in which the ranks of the opposition were miraculously swelled by a large number of dead people. Maybe the presence of so many cardinals and bishops were responsible for this miracle!

Such is the determination of the class enemy to eliminate President Chavez that the repeat of some such a “miracle” next Sunday is not impossible. The workers and peasants must be on their guard! If the opposition “wins” through fraud, the people must take matters into their own hands. The only answer is direct mass action in the form of a general strike and an insurrection that will place power in the hands of the working people – the only truly democratic force in society.

Let nobody fool himself. If – as seems likely – the masses win the referendum, that will not mean the Revolution is saved. On the contrary, the enemy will immediately launch a new and even more furious offensive against it. Those people in the leadership of the Bolivarian Movement who argued that the acceptance of the referendum would satisfy the imperialists are wrong. The Revolution will have to defend itself, and the only defence possible for a Revolution is to go onto the attack.

The committees that have been set up to win the referendum campaign must be kept in being after August 15. They must be broadened and made completely democratic, to include the widest layers of the working class and other oppressed layers. They must be linked up at local, regional and national level. Above all, they must be armed. Only the armed people can defend the Revolution against its enemies.

One thing is certain: as long as the oligarchy is permitted to retain key levers of economic power in its hands, it will continue to use its power to undermine the Revolution, to insult, calumny and discredit the democratically elected government and to prepare for new coups, assassinations and violence.

Let us therefore mobilise all our forces to defeat the enemy on April 15. But if we win, let us not waste our victory as we have done on previous occasions in futile attempts to negotiate and compromise with the enemy. Let us use our victory to advance and destroy the economic and political power of the oligarchy forever and carry the Revolution out to the end in Venezuela and in the rest of Latin America.

Defeat the counterrevolution!
Vote “no” on August 15!
Down with imperialism and the oligarchy!
Carry the revolution through to the end!