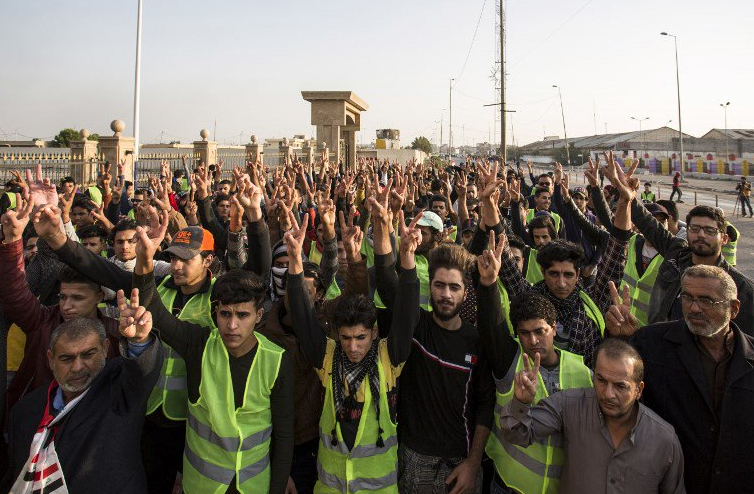 A wave of protests is sweeping Iraq, with the latest taking place on 21 December in Basra. About 250 people gathered outside the temporary headquarters of the provincial council throughout the afternoon to protest against corruption, and demand jobs and better public services. A few weeks before, on the 6 December, 100 protesters were seen mimicking the recent French mass protest movement by wearing yellow high-visibility vests, when they gathered in front of the Basra’s council building and in Baghdad at Tahrir Square.

Iraqi society is simmering with anger aimed at the ruling class. The protesters’ list of demands is long but consists mainly of satisfying the most basic human needs; for water and power; for job opportunities; for the dismissal of corrupt managers and security staffers; as well as the arrest of politicians accused of corruption.

The May elections in Iraq saw Muqtada Al-Sadr and his Sairoon coalition come out as the largest bloc in parliament. Their success was mainly due to widespread anti-establishment sentiments throughout the country which Al-Sadr demagogically tapped into. However, none of the fundamental problems facing Iraqis have since been solved and hence protests have been carrying on across the country and in particular in Basra.

Protests in Basra broke out on 8 July, when a group of 10 protesters attempted to blockade the road to West Qurna: home of the largest oil field in Basra. The blockade was an attempt to interrupt oil production. This has since turned into a much more serious challenge to the regime, where protests have spread to other cities including Amara, Nasiriyah, Samawa, the Shia holy cities of Najaf and Karbala as well as the capital, Baghdad.

On 14 July in Amara for example (the capital of the Maysan province on the border with Iran), protesters occupied the headquarters of the provincial governorate, and threw stones at branches of the Dawa party and the powerful Badr Organisation, which has close ties to Iran. The Iraqi media reported that overnight protests spread through the Maysan province. They were held outside the headquarters of various political parties and some were set on fire.

On 27 July, thousands of protesters gathered at Tahrir Square in Baghdad chanting “No, no to political parties!” Soon after, on 5 September, at least seven people were killed and 30 wounded in Basra after a protest of hundreds was fired upon by security forces. The next day, this led to thousands of people taking to the streets.

In the southern provinces, they took their campaign to the headquarters of political parties, setting some on fire and ripping down political posters. “The people want an end to the parties,” is what they chanted. Placards were with slogans such as: “We ask the decision makers to provide the things we are deprived of”.

Baghdad has given an immediate, violent response to these demonstrations. On Wednesday, 6 December, demonstrators were protesting near the headquarters of several oil companies and government offices throughout the country. In Basra, 100 protesters tried to replicate the anti-establishment, French “yellow vest” movement, while protesting in front of Basra’s council building. Protesters were chanting and throwing objects at the building, and the security forces responded by firing live rounds into the crowd.

On the following day, dozens of people came out in Baghdad’s Tahrir Square wearing yellow vests in solidarity with Basra. “Today, we are staging a protest in Baghdad to show support for the people of Basra. We call for a quick solution to their just demands and an immediate end to the deployment of this massive force against protestors,” said civil activist Hana Adur.

During the most recent demonstration in Basra, on 21 December, 250 protesters were trying to storm the provincial council building. They threw rocks and empty water bottles at riot police. Iraqi security forces responded with live bullets and teargas. It was the second week in a row that riot police used force to quell the demonstrators.

When asked why the protestors decided to encircle some of the oilfields in Basra, a 28-year-old science graduate, who works repairing mobile phones, explained:

“Young people here feel that the whole country depends on Basra's oil production. Which is why we wanted to use this card to pressure the government, that is also why the government responded the way it did”.

Such is the fear with which the ruling class regards this movement, that some foreign oil companies even evacuated their senior staff in July. Abadi, on visiting Basra in August, announced a $3bn investment in the province, promising increased spending on housing, healthcare, education and a further 10,000 jobs. He was not received with applause, however. The requests for jobs exceed that number, with more than 85,000 people applying so far. There is no answer as to how and when further jobs will be implemented.

“This is just an expression of anger because of our miserable reality,” a protester named Kareem told news website NIQASH. He is a 26-year-old graduate of 2015 from Basra University, but who has been unemployed ever since:

“The government is not helping us find jobs and whenever there are jobs they are given to the families of martyrs [people killed fighting the Islamic State group], or the relatives and friends of officials, or members of political parties. Meanwhile, the general public suffers.”

Basra is one of the main hubs of Iraqi oil production, but locals have long complained that they have not seen the benefits of the oil wealth. Despite the tremendous natural wealth of Southern Iraq, infrastructure has been allowed to collapse in the region. With temperatures reaching highs of 50 degrees Celsius in the summer, most of the population does not have reliable access to electricity.

Iraqi tap water is also completely undrinkable and so the population is forced to buy their own bottled supplies. A water crisis in the province has placed 100,000 people in hospital since mid-August alone, according to the Provincial Council for Human Rights. As one demonstrator in Basra put it “It’s a shame that I am demanding water in 2018. Water I ask for... nowadays people travel by plane! Alas humanity! I have oil that feeds the entire world!"

The poverty rate increased from 19.8 percent in 2012 to an estimated 22.5 percent in 2014. Furthermore, the unemployment rate is about twice as high in the governorates most affected by ISIS-occupied regions, compared to the rest of the country (21.1 percent versus 11.2 percent), especially among the youth. In Basra in particular, a city of more than 4 million people, the unemployment rate has shot up sharply to at least 30 percent, according to deputy Gov. Dhirgham al-Ajwadi.

The contradiction is clear for all to see in Basra, with the majority of the population enduring extremes of poverty whilst living atop a gold mine. People are rightly asking: “more than 6,092 barrels of oil are exported from the port of Umm Qasr per day, so where is the money?”. Many have drawn the conclusion that the government simply consists of criminals who do not care about people’s lives.

Prime Minister Haider al-Abadi has responded to these protests by deploying security and counter-terrorist forces and closing Iraq’s border crossings and ports. The police intervention, far from quelling social unrest, has only resulted in death and injuries. This has sparked even larger movements inside Basra, which have spread to other cities north of the province. Fearing this spread of the movement, the government has responded by slowing or cutting internet services entirely to stop the fire from spreading.

The current events in Iraq should also be seen in conjunction with recent developments in the rest of the Middle East, where similar conditions of poverty, unemployment and rampant corruption are pushing wide layers back onto the streets. In Jordan for instance, a recent protest wave brought down the prime minister, and in Iran there is an ongoing crisis and rising labour disputes. This situation in Iraq is part of a new wave of mass movements across the region.

The ruling elite in Iraq is unable to address any of the needs of society. The regime is extremely dysfunctional and mired in corruption at all levels. Its countless factions are all completely enmeshed in their own internal struggles and only concerned with filling their own pockets before time runs out. The ruling class is completely out of touch with the real conditions faced by the masses. This disconnect was reflected in the record high abstention rate of the May parliamentary elections. As we explained then, the abstention does not reflect apathy towards politics, rather it expresses enormous hatred towards the rotten and corrupt political system as a whole. That anger is now increasingly finding its way onto the streets.